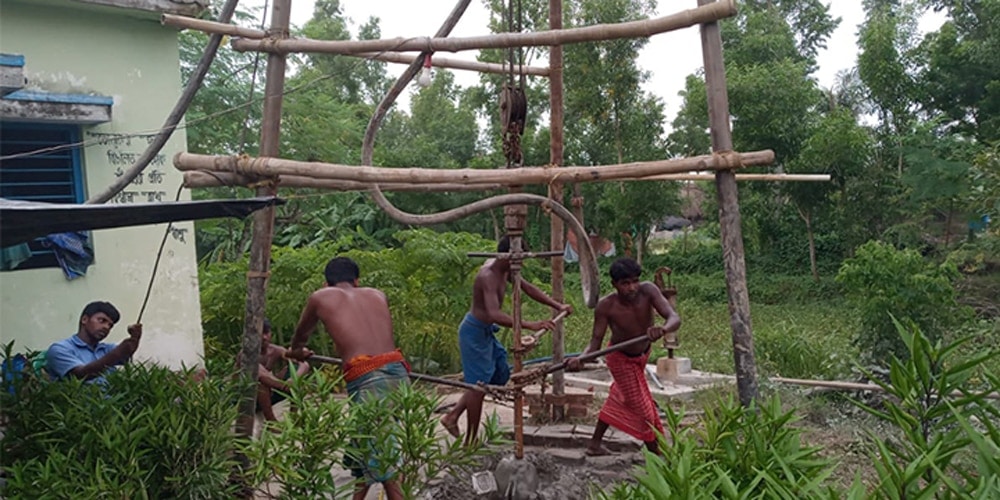 In 2019, Maranatha Volunteers International started a water program in India, where as much as half of the population doesn’t regularly have access to clean water. Most of this work has been accomplished through a traditional large rig. Recently, however, Maranatha started drilling in the Sundarban Islands, a delta system in the Bay of Bengal.

This initiative required a unique process.

“Traditional large drilling rigs aren’t able to reach the islands,” explained one of the Maranatha leaders who is well acquainted with the project. “Materials are transported by boat to the nearest shore, where they are carted to the drilling site.”

Maranatha leaders explained that although a small machine is used in the drilling process, much of the work is done by hand. “Each length of pipe must be inserted manually, with a worker at the top of a temporary tower guiding it into the hole,” they reported.

From here, leaders explained, workers walk in circles around the hole as the drill is slowly driven into the ground, ensuring the soft clay doesn’t cave in. According to the project coordinators, it is an arduous process that can take five to six days.

But the work is steadily moving forward, coordinators reported. “Currently, Maranatha has drilled nine wells and has two others in process in the Sundarban Islands at Seventh-day Adventist churches, bringing clean water to hundreds of people in need,” they said.

Maranatha Volunteers International has had a continuous presence in India since 1998, establishing an office and building places of worship and education throughout the country. In 2019, Maranatha started drilling water wells in areas in need of clean water. The organization has built more than 2,400 structures in India.

Maranatha Volunteers International, based in Roseville, California, United States, is a non-profit, Christian organization that organizes volunteers to build churches, schools, and waters wells around the world. Established in 1969, Maranatha has constructed more than 11,000 structures in nearly 90 countries and mobilized more than 85,000 volunteers.