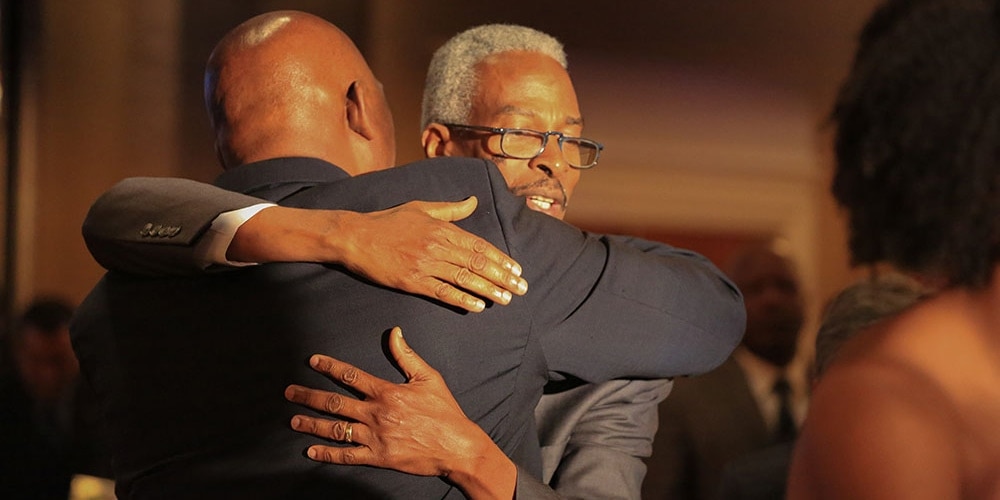 Dozens of church administrators, colleagues, staff, family, and friends gathered this week for a celebratory church service marking the leadership of Israel Leito in the Inter-American Division (IAD) during the past 24 years. Leito holds the record as the longest-serving division president, according to the Seventh-day Adventist Church’s Office of Archives, Statistics, and Research.

“We have come here to thank the Lord for the ministry of Ludmila and Pastor Leito here in the Inter-American Division,” said IAD president-elect Elie Henry. “After so many years together, ‘the family’ wanted to celebrate this moment with friends.”

“You have been a mentor, an extraordinary advisor, and wonderful example,” said Henry, who has worked alongside Leito for more than 15 years.

Henry read a statement on behalf of Adventist Church president Ted N. C. Wilson and his wife, Nancy. “On behalf of the world church of Seventh-day Adventists, let me share our appreciation for God’s guidance in the work of Pastor and Mrs. Leito. From departmental to administrative activities, they have been instrumental in helping thousands of people worldwide,” Wilson stated in his letter.

Several vice presidents from the Adventist world church as well as top church administrators from the Inter-American territory’s 24 unions, or major church regions, also honored the Leitos for their dedication, commitment, and leadership throughout the years, during the farewell celebration on July 11, 2018. Dozens of former employees who worked under his leadership throughout the years also joined in the celebration.

Former IAD president George W. Brown spoke highly of the growth of the church in Inter-America since Leito took over from him as division president.

“When I exited in 1993, there were 11 unions and 64 fields, and 1.5 million members,” said Brown. “Now that Pastor Leito exits, there are 24 unions, more than 150 fields and, praise God, 3. 8 million members. This is no ordinary accomplishment, so I salute my friend and colleague and his beloved wife.”

Leito acknowledged former IAD presidents and leaders who laid the foundation for the success of the church prior to his tenure.

“We must continue to prepare people for the coming of the Lord,” said Leito. He encouraged church administrators and leaders present to always move forward with innovative ways, never afraid of trying something new, respecting policies, and putting people above policies and circumstances.

“Think on how your decisions will impact the lives of others,” said Leito. “There is a bright future for the Inter-American Division. God is still leading, and there is more work to be done, more souls to be saved.”

Leito shared the unfulfilled dreams he has as he leaves office and retires from organizational service on August 1, 2018.

“I would love to have seen the sixth Mexican Union organized in Tabasco,” said Leito. In addition, he said he would like to see more local fields organized as conferences, and higher salaries for teachers.

“I want to see a church where the youth are totally accepted, free to be innovative, and fully equipped to lead this church,” he added.

He praised leaders and staff at the IAD office for their dedicated work to the mission of the church and assured them that Henry comes with extraordinary administrative, academic, and pastoral experience to the task as the new division president.

Church department heads paid tribute to Pastor Leito with music and song during the evening event, along with words of admiration and gifts from union administrators.

“Move in faith, for God is in control,” Leito concluded.