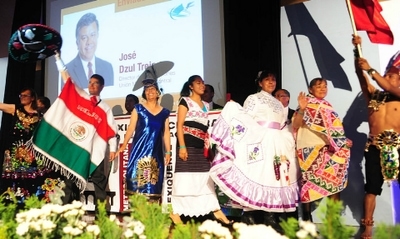 With bright smiles
and colorful garb, literature evangelists representing thousands more from
Central America, the Caribbean, French Antilles, Colombia, Venezuela and the
Netherland Antilles, represented their countries and reaffirmed their mission
to bring hope into every home. The theme of the four-day congress, which ended
last Sabbath, was “Sent to Save.”

“We want you to be
inspired, motivated and determined to continue knocking on doors in homes, in offices,
touching the hearts of all who need hope,” he said.

“Your work is of utmost importance for
the worldwide evangelistic work,” Wilson said. “The people you visit every day
are potential souls for the kingdom of God.”

Mexican government
officials from the State of Quintana Roo were also present to welcome the large
delegation. Juan de Dios Chan, representative for the Governor of Quintana Roo,
thanked church leaders for their work in creating a positive change in the
conscience of the people in the state.

“We recognize your
work to benefit the social problems in our society, and we know that with the
programs you offer to strengthen families, together we will improve the values
in Quintana Roo and the rest of Mexico,” Chan said.

Strengthening society
through publications is what constitutes the ministry of canvassers or literature
evangelists, said Erwin Gonzalez, Publishing Ministries director for the church
in Inter-America.

“As literature evangelists, you make a
difference in the equilibrium of what God wants to do with His people and the
welfare of humanity,” said Gonzalez. “You have received the mission from God to
take the message of hope, for that’s the reason for colporteuring.”

Taking the message of
hope will come with more tangible benefits, thanks to a recent revamping of the
publishing ministries by the leadership of the Inter-American Division, church
leaders said.

“We have come up with plans that will
show literature evangelists that their work of canvassing goes hand-in-hand
with the work of ministers,” Leito said.

Literature
evangelists who meet certain criteria under the new policy will be able to
enjoy educational allowance for their children, get assistance for medical
expenses, and receive retirement benefits.

“We want you to feel
respected, accepted and valued,” Leito said. “All we ask in return is for your
loyalty, consecration, and ample service to the church.”

For Elva Corina
Morales, 32, of the Inter-Oceanic Mexican region, it’s been nothing but loyalty
and commitment in selling books for nine years. Morales was honored for being
the literature evangelist with the most sales in 2013 across Inter-America.
Selling more than $240,000 in books, Morales said she works at connecting with
people and knowing the books she sells is key.

Morales was praised
by Gonzalez for not only reaching such high sales but for also training others
on how to sell books as a ministry.