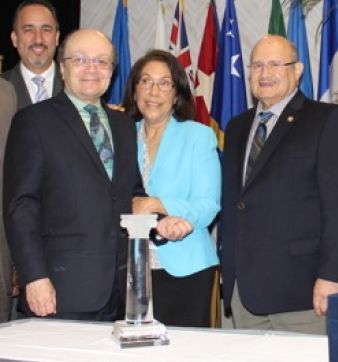 The Inter-America Division together with its Inter-American Theological Seminary has recognized two theologians with a new award aimed at inspiring future generations of Adventist theologians and ministers within its territory.

Rodríguez, a Puerto Rican native who retired five years ago from the Biblical Research Institute, was honored for dedicating decades of his life to contributing to theological reflection, motivating others to generate research, and articulating in-depth but accessible ideas, presenters said.

“Dr. Angel Manuel Rodríguez has been selected to receive this award of excellence for having marked a path for others to follow,” said Efrain Velazquez, seminary vice president, as he read excerpts from the seminary’s theological journal, Teobiblica, to dozens of church leaders gathered this week for seminary board meetings and executive committee meetings.

Rodríguez was singled out for his contributions on the study of the theme of the sanctuary, especially during a time when that doctrine was scrutinized worldwide.

“Thanks to the questions that he and other scholars came up with and the answers they generated, we have been able to deepen our knowledge of a fundamental doctrine for the comprehension of the Scriptures and the plan of salvation,” the article said about Rodríguez.

In addition, Rodríguez was able to explain the Adventist Church’s fundamental beliefs to people outside the church without compromising or varying them, it said.

Division president Israel Leito thanked Rodríguez for his role in grounding discussions on theological crisis and administrative issues on the Bible.

Rodríguez was visibly overwhelmed by the expressions of gratitude by church leaders as he accepted the award, a beautiful crystal pillar symbolic of the foundational nature of recipients’ contributions. He said he never expected that his work would have the effect described by so many.

He emphasized his humble beginnings in Puerto Rico and highlighted that “the theology that is not placed at the service of the church, is meaningless.”

Church leaders also recognized Castrejón, who has led the seminary since its founding in 1994 and helped it get fully accredited in 2011. Castrejón received the award for dedicating decades of his life to ministerial education at the institution and division level, and for his contribution as a benchmark on higher education administration, presenters said.

“His countless contributions to theological education highlight his position as a pillar for the Inter-American ministerial body,” Leito said. “The division thanks you for your decades of ministry and for the legacy you leave in Inter-America.”

Elie Henry, division executive secretary, also thanked Castrejón in the name of all of the union administrators for his long tenure in the division and hesitantly accepted his letter of intention to retire.

Castrejón, who is originally from Mexico, has served in the division office since 1990.

Castrejón began his work as the division’s associate ministerial secretary in 1985 and later moved to head the Ministerial Association at the division headquarters until 2000. Castrejón, who was instrumental in spearheading Montemorelos University in North Mexico, also launched the Inter-American Theological Seminary. He led the seminary for years single-handedly, and initiated efforts to provide accreditation for its programs.