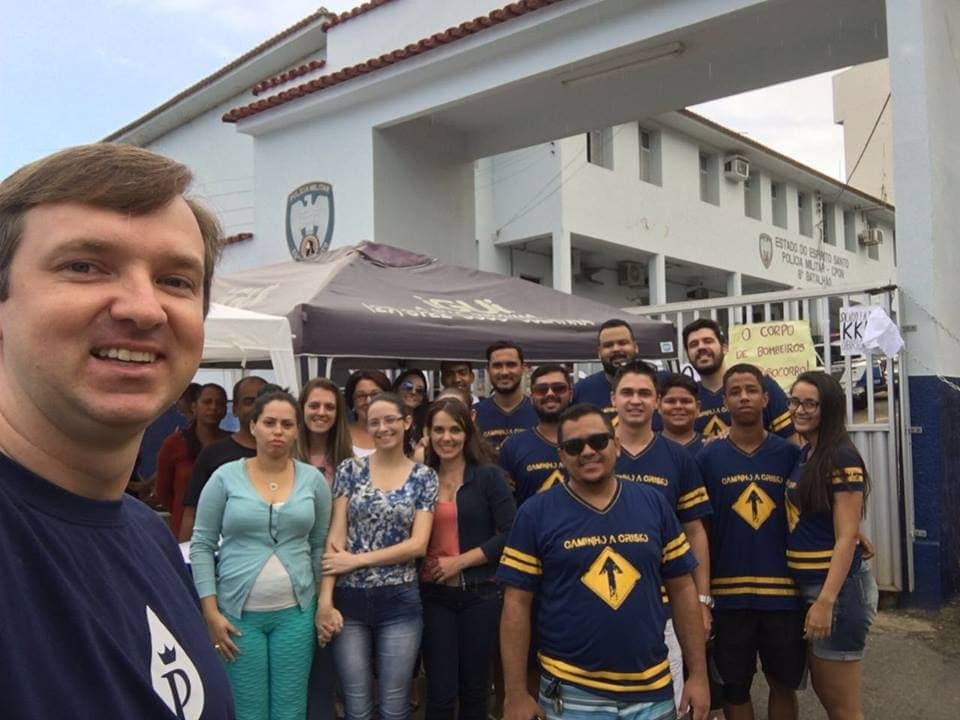 The state, situated along Brazil’s Atlantic Ocean coast and home to 3.8 million people, has been wracked by violence and disruption after state police were unable to work when family members blockaded their barracks. According to media reports, Espírito Santo is one of several Brazilian states suffering budget cuts during a time of national fiscal crisis, and those cuts have had an impact on public services.

In the midst of this, the region’s Adventist youth are taking peaceful action. Last weekend, in the city of Serra, a group held a march in the streets of Porto Canoa neighborhood with messages of hope and comfort for the population. The youth also invited local residents and businesses to pray for the Capixaba municipalities, which have been facing a public security crisis since the police action began on February 4.

“We were already praying for this situation, but [last Sabbath] we went on the streets to bring the word of God to the people, who were still very apprehensive. In the streets, in the shops, where we passed, we asked the residents if we could pray with them. Many participated and were immensely grateful. We feel motivated and strengthened by God," said Matheus Fávero, a church member.

At Colatina, a group of Adventist youth gathered in front of the Military Police Battalion to sing and pray with the people who were there.

“In the Bible, Second Chronicles says that if we humble ourselves, seek and cry out to the Lord, He will hear us and heal us. We must have our land healed. So we come together and cry out together in prayer,” said Alex Christian Will, Colatina regional pastor. He said the initiative is also important because it involves young people in preaching the gospel.

“They like to work inside and outside of the church. This is a way of awakening them and engaging them in this mission,” Will added.

If we humble ourselves, seek and cry out to the Lord, He will hear us and heal us.

Due to the wave of violence the Capixaba municipalities have faced in recent days, some Adventist churches were closed on Sabbath, February 11. Meetings were held in member homes when access to a congregation wasn’t possible. In Grande Vitória, sermons were broadcast online. And in the municipality of São Mateus, in the north of the state, more than 20 families gathered in small groups to study the Bible and intercede for the peace and tranquility of the Capixaba municipalities.

“We can learn from all situations. At this moment of crisis, we saw the importance of being in communion with God and with our brethren,” noted São Mateus pastor Aécio Goecking.

According to Hiram Kalbermatter, church president for the central and northern areas of the state of Espírito Santo, participation in small groups strengthens Christian relationships.

Kalbematter said, “This is a glimpse of the last days. Just as the early church gathered in homes because of persecution, there will come a time when the church will be divided into small groups. We have to prepare for [that time].”