In the US, Adventist Mathematics Student Gets Top National Award 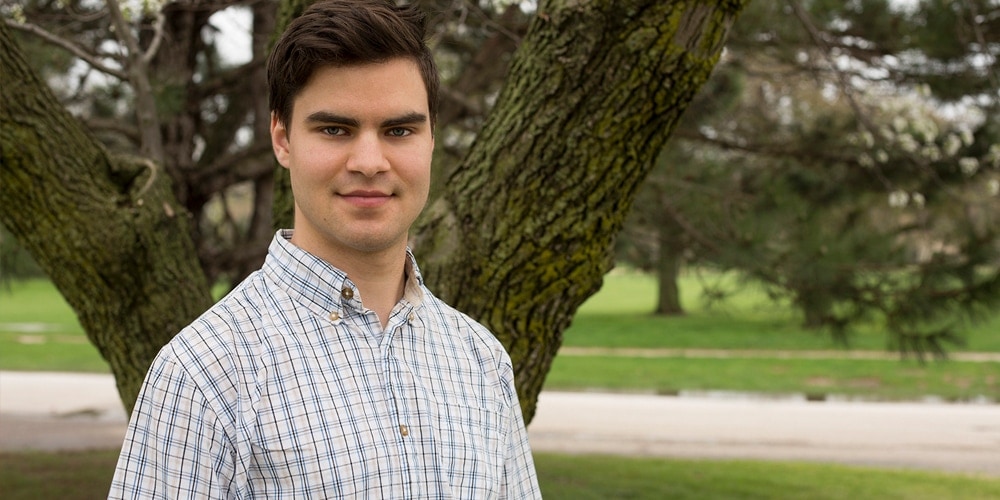 On Friday, March 30, 2018, Mykhaylo M. Malakhov, a sophomore mathematics major and J.N. Andrews Honors Scholar at Andrews University, was awarded the Barry Goldwater Scholarship, the most prestigious national award for undergraduates who intend to pursue careers in the natural sciences, mathematics, and engineering.

Established by Congress in 1986 in honor of Senator Barry Goldwater, this scholarship is awarded yearly to the top STEM (science, technology, engineering, and mathematics) majors who display intellectual curiosity, a strong commitment to research and potential to make significant future contributions to their respective fields. Consequently, Goldwater Scholars are known for having very impressive academic qualifications that have garnered the attention of prestigious post-graduate fellowship programs. To be considered, candidates must be nominated by their university and fill out an extensive application complete with a research paper. Each university can nominate up to four students per year. Scholarship recipients are awarded US$7,500 per year until they graduate to apply toward tuition, fees, books and room and board. This year, 211 scholarships were given to undergraduates across the United States from a pool of 1,280 nominated students.

Since the scholarship’s inception, Andrews University has submitted a total of 49 applications and has had seven award recipients and four honorable mentions. Malakhov is the seventh recipient, with the previous scholarship going to Libby Megna (biology/math) almost a decade ago during the 2008–2009 school year.

Ryan Hayes, professor of chemistry, is the Andrews campus representative for the Goldwater scholarship. He says, “It was quite an honor to Malakhov, the Department of Mathematics, the Department of Biology, and Andrews University.”

Malakhov’s primary research is with the Seabird Ecology Team, an interdisciplinary research group on campus consisting of mathematicians and biologists. His project focuses on investigating the effects of climate change on glaucous-winged gull populations in the Pacific Northwest which are sensitive to rising temperatures and hence considered to be sentinels of climate change. Malakhov’s work includes analyzing a mathematical model (a set of equations describing a real-world system) to discover how behavioral changes in the gulls affect the long-term survival and dynamics of the population in light of increasing sea surface temperatures. He began working on this project in the summer following his freshman year when he joined the National Science Foundation-funded summer REU (research experience for undergraduates) directed by Shandelle Henson, professor of mathematics and ecology at Andrews University.

Since then, Malakhov has presented his research results at the Joint Mathematics Meetings, the largest and most prestigious annual mathematics conference worldwide; the Michigan Academy of Science, Arts, and Letters; and at several gatherings on the Andrews University campus. His goal is to continue working with the results, and he is currently writing a paper that he and Henson plan to publish in a peer-reviewed journal. This project will also become his Honors Thesis.

Henson says, “Mykhaylo Malakhov is an outstanding young mathematician who also has a heart for people and Jesus. He is a true intellectual, with strong interests in the arts, literature, philosophy, and music. I enjoy discussing Dostoyevsky, bread baking, plate tectonics, piano, and hiking with him. He is the kind of person who will become extremely successful and will then invest heavily in the careers of others.”

In addition to his work with the Seabird Team, Malakhov is actively involved in additional research projects, leadership positions and experiencing his greatest joy by, as he says, “sharing the beauty of mathematics and the wonder of God’s creation with others.” Some of his accomplishments include assisting with the start of a computer science education program at Ruth Murdoch Elementary School, organizing the first-ever Putnam Competition team and preparation course at Andrews University, and leading out in a solar energy installation project in Madagascar with Engineers Without Borders. He currently serves as the vice president of the Andrews chapter of Engineers Without Borders as well as the mathematics president of eigen*, the Andrews math/physics club.

Malakhov plans to earn a Ph.D. in mathematics and become a professor. As he wrote in his Goldwater scholarship application, his dream is to “conduct research that bridges the gap between pure and applied mathematics and engage underrepresented groups in the mathematical sciences at the university level.”