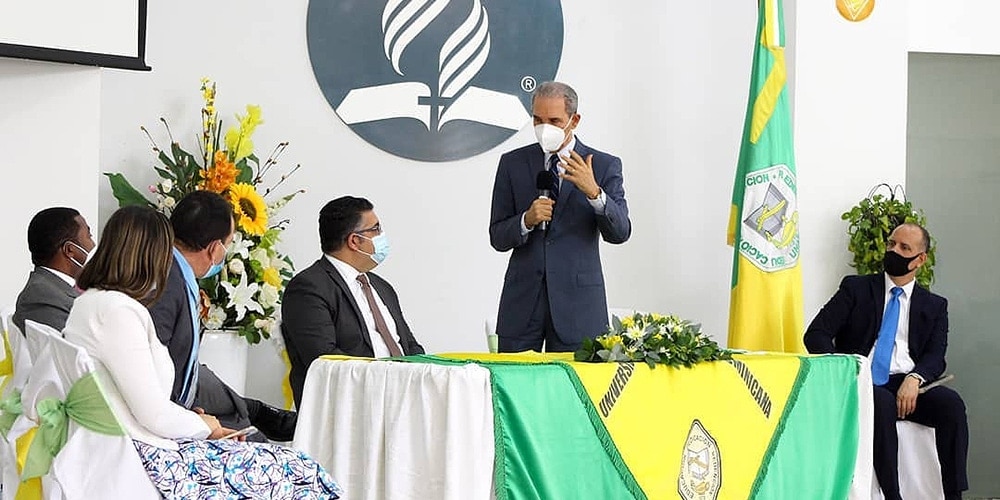 Franklin García Fermín, Minister of Higher Education, Science and Technology (MESCYT) of the Dominican Republic, recently visited Dominican Adventist University (UNAD) on its main campus in Villa Sonador. The historic visit to the Adventist campus drew university administrators, faculty, staff, and students to welcome García Fermín and other officers during a special program on October 9, 2020.

During his visit, García Fermín commended the institution for what he called its invaluable contribution to educating thousands of professionals throughout the years. He thanked leaders and staff for the warm welcome and for the outstanding national educational system the church leads and the good relationship it maintains with its community. His visit was part of an extensive tour to higher educational institutions in the Dominican Republic, which began recently, he said.

“There will be an open, horizontal exchange,” said Minister García Fermín. “We are going to foster direct communication channels with universities.” He vowed to work in close partnership with higher educational institutions from now on.

García Fermín encouraged university leaders to create doctoral programs where they could contract national and foreign professors with the support of the MESCYT and work together with other universities if needed. “MESCYT will support those initiatives,” he assured them.

The minister encouraged university leaders to submit a proposal for a doctorate in education for the government to fund with a grant.

UNAD president Angel Guzmán Lizardo thanked the minister and his associates and referred to the visit as an unprecedented gesture.

“UNAD seeks to transform society through education,” said Guzman. “The goal of the Dominican Adventist University is to contribute to the improvement of the country through the services it provides to the nation, especially through its work-study program, in which low-income young people carry out their studies combined with a work schedule regardless of their nationality.”

What’s more important is not that they get a degree but that they can become the best husbands, the best wives, and better citizens, with values that may change society for the better, emphasized Guzmán.

The event was broadcast on the school’s social media platforms. UNAD is managed by the Seventh-day Adventist Church in the Dominican Republic, offering several undergraduate and master’s degrees on its main campus in Villa Sonador and its extension campus in Santo Domingo. The university is known as the university of values. Its mission is to prepare excellent, innovative professionals who are committed to serving God, country, and the world.

The school, which was first established in 1946 and moved to its location in Villa Sonador in 1976, is accredited by the Adventist Accrediting Association.