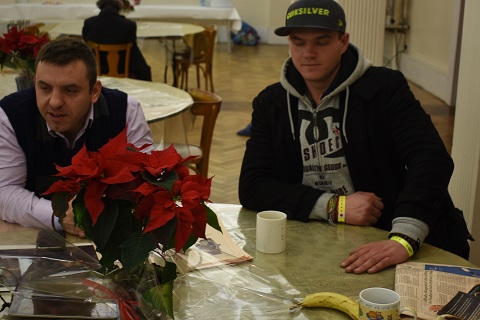 For a fifth year running, the South England Conference's Advent Shelter, held at the Advent Centre in Central London, was full in housing 70 homeless and lonely people, from December 24, 2016 to January 2, 2017.

Throughout the Christmas and New Year period, volunteers from churches across the entire British Isles from Cornwall to Scotland helped provide fully-catered meals, drinks, warmth, entertainment and safety for each of the homeless that made their way to the shelter.

The key to the success of the shelter are the number of volunteers.

Malika Bediako, SEC Community Services director, continues this initiative to provide a refuge for vulnerable people at what is usually the most festive but loneliest time of the year.

On the last Sabbath of the shelter programme the Advent Centre opened the doors of the church to their homeless guests, and provided a special service. Malika, the speaker for the morning shared her own experiences of being homeless and how that impacted her own life.

She encouraged the church to embrace the message of a Christ who saw each person as a person of worth worthy for His own experience of leaving His home to enter a world of rejection and despair. Afterwards Malika shared in an interview how the homeless project which started with former SEC Community Services director Elsie Staple five years ago, has continued to grow each year. What makes this project inspiring is not just the number of homeless coming in but the way they respect and appreciate the services that are on offer and abide by the code of behaviour set by the shelter. In the past some of the guests have desired to know more about the Church and engage in Bible studies, with some requesting baptism.

The key to the success of the shelter however are the number of volunteers. Through the dedication of church members as well as those from the community who had heard about the programme, by offering their time and support, the shelter programme was able to run 24/7 during the festive season.

One of the guests, named Kieran, was keen to tell his story of a life that spiralled out of control due to his addictions. He lost his job, family and almost his sanity. He shared how it was when he hit rock bottom, when there was no lower to stoop that he sought help to clean up his life. He admitted he still has a long way to go, but his life is now heading in the right direction. He expressed his appreciation to the shelter for providing an opportunity to engage with volunteers and the pastors who passed by sharing about spiritual matters.

Two volunteers from Croydon, Blossom and Rochelle, invited three homeless people from their own local feeding project to stay at the Advent Shelter for the period over Christmas. They also expressed gratefulness for the kindness and hospitality shown to them. Blossom remarked, "it's a privilege for me to be involved, it's the least I could do. I wanted to invite those from the Croydon homeless project to join in here and I'm happy that three took up the invitation."

Rochelle, reflecting on her experiences as a volunteer said, "I feel this is a really good use of my time, it is usually the party season where people are going out drinking and having fun, but this is really one of the best Christmases I've ever spent. I didn't know what it was going to be like before I came, but it's been really relaxed, no trouble at all and I'd definitely volunteer again!"