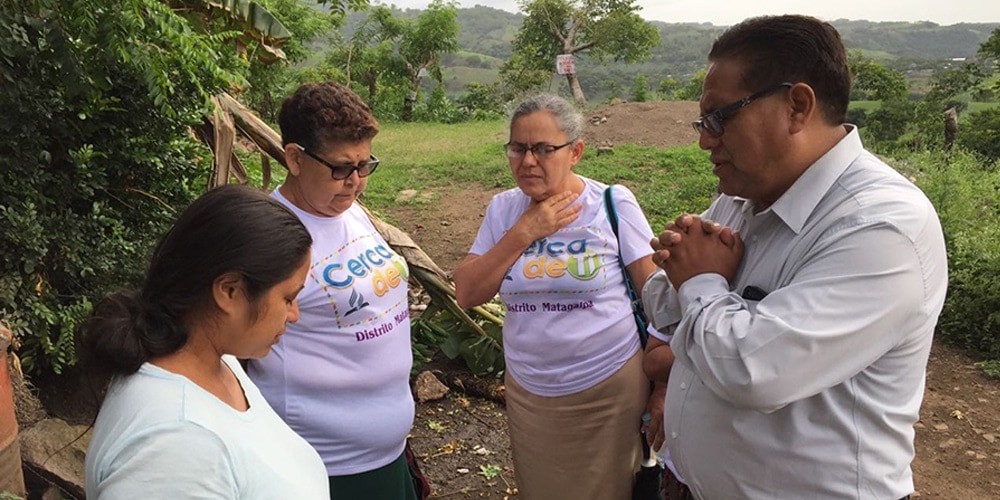 In the midst of the civil unrest that has affected Nicaragua since mid-April, the Seventh-day Adventist Church continues to spread the message of hope in its communities, with members praying, worshiping, and uniting to spread the love of Jesus, a regional leader reports.

“Our church has remained strong and moving forward,” said Wilfredo Ruiz, president of the church in the South Central American Union, which oversees the growth of the church in Costa Rica and Nicaragua.

Ruiz recently met with pastors and church school principals in Managua to pray and reassure leaders of their role in guiding the church even as the number of crime-related deaths has gone up, protests have continued, and many have lost their jobs and are facing serious financial challenges.

“Many of our pastors are young and have never experienced this type of situation in the country,” said Ruiz. “It is the reason we wanted to remind them how important their ministry is in visiting the members in their homes, in understanding that the church does not affiliate with any political parties or get involved in civil protests, and is careful what they say and write at times like this.” Leaders also prayed and revisited their evangelistic strategies and initiatives to promote spiritual unity and outreach activities in the community.

During the time of the early unrest, church members began meeting in homes through their small groups, said Ruiz, but now most are meeting in churches again and resuming their evangelistic endeavors.

Financial reports for the second quarter indicate that tithes and offerings have decreased, said Ruiz. “Many members have lost their jobs, or their businesses have been affected, so the numbers reveal that,” said Ruiz.

In Managua, the capital city, 75 percent of church activities have not stopped during the last three months, said David Murillo, communication director for the church in the Central Nicaragua Mission. “Our church has continued with conferences focused on stewardship, and most of our churches meet for weekly worship, except some churches that had to cease their meetings in certain municipal districts,” said Murillo. “But many of the worship schedules were adjusted so that members could meet earlier in the day to ensure their safety to and from church.”

Members are still clear about the church’s evangelistic mission, even during the crisis, said Murillo. “The church has doubled its prayer sessions in homes and churches and has continued to hold evangelistic campaigns and missionary activities in many communities,” he said.

Hundreds of missionary books on creation, health, and evangelism were distributed during the past three months, church leaders said.

In the northwest part of the country in Matagalpa, the church organized blood donation drives; distributed food in poorer communities in many districts; provided health screenings to the elderly; prayed for those who are discouraged; visited the sick in hospitals and health centers; and gave out medicines to those in need.

Similarly, in the western part of the country, church members reached out to the less fortunate with food and supplies and held evangelistic campaigns in several districts.

A group of young people from Managua have taken to social media to spread messages of hope and peace every day during the past four months.

“We know that God is strengthening the church in Nicaragua, which reassures us that He is moving His people for greater impact in any situation,” Ruiz said.