In Moldova and Belarus, Adventists Show Support for People With Disabilities 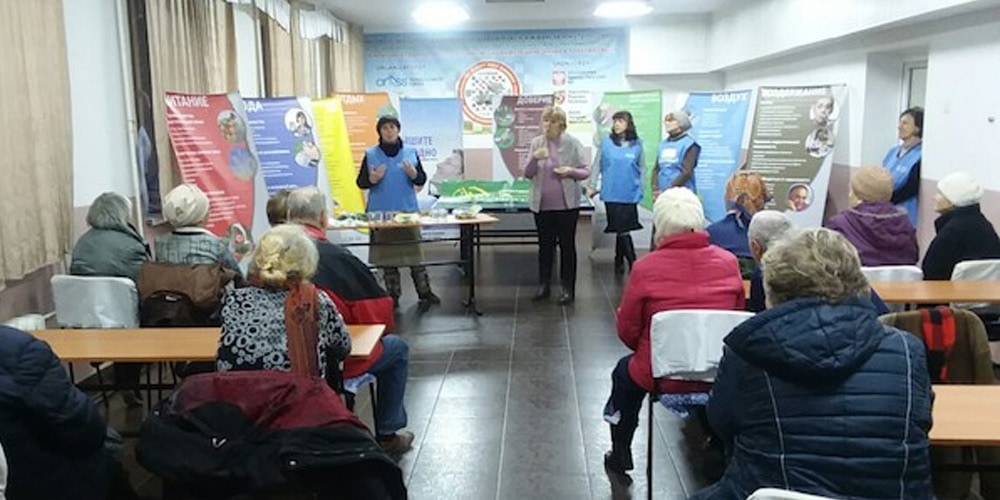 Seventh-day Adventist Church members and leaders across the Euro-Asia Division region have been increasingly directing the public’s attention to the plight of people living with disabilities. Around the United Nations’ International Day of Persons with Disabilities, which is celebrated on December 3 each year, local Adventist churches across the region organized events to serve people who experience hardships resulting from one or more disabilities.

Adventists for the Blind

In Ungheni, Moldova, on the country’s western border, local teenagers were invited to a special meeting of the Society of the Blind. The meeting, held in a hall of the local city hall building, was attended by 40 visually impaired people and at least 40 relatives. The local Adventist pastor, Valentin Pirozhok, was also invited, and organizers asked him to address the people attending the meeting.

Pirozhok shared from the Bible some stories of healing, stressing that every person’s ultimate hope is found in God. “The Lord wants to give each one of you spiritual insight and the eyes of faith,” he told the visiting group.

After Pirozhok spoke, local poet Rodica Tom read from her poems about God the Creator and about home and mothers. A group of Adventist teenagers sang and recited verses on the topic of gratitude.

Thanks to the donations of Moldovan citizens living abroad, church members had funds to prepare 40 food packages, which they distributed among those in need.

Several of the visually impaired and their relatives expressed words of gratitude. “Thank you for not forgetting us,” they told Adventist members.

Ungheni Seventh-day Adventist Church will continue to extend its care to city residents and include nearby villages, leaders said.

Partnering With ADRA in Belarus

For several years in Minsk, the capital city of Belarus, the local branch of the Adventist Development and Relief Agency (ADRA) has been partnering with local Adventist members to support people with disabilities. Activities, usually held in late November, prompt volunteers to collect food packages for people in need and those with disabilities.

A local supermarket chain allowed Adventist volunteers to use their facilities at more than 10 stores across the city.

Leaders reported that in just four days (November 26-29, 2018), more than 500 eleven-pound (five-kilogram) packages were collected, part of a seasonal total of 5,500 pounds (2,500 kilograms) of food collected, as Adventist volunteers invited residents to participate.

“This is convincing evidence that among Minsk residents there are a great many kind and sympathetic people who are not indifferent to the needs of people living with disabilities,” one of the organizers said. “It was especially heart-warming to see how not only adults but also children and young people participated.”

On Sunday, December 2, volunteers distributed more than 50 food packages to single pensioners and disabled people in two city districts. Minsk church members said they want to increase their support to the needy and the disabled. “We are planning to hold more special events, to collect and distribute even more packages,” they said.

In the city of Tiraspol, Moldova, close to the eastern border with Ukraine, Adventist Church members organized a health exhibition at a clubhouse for local hearing-impaired people on December 3.

For the first time, a program that specifically caters to this group was organized by a partnership of a public organization and the Adventist Church.

The question posed before the dozens of hearing-impaired people who attended the event — thanks to the help of an experienced sign-language translator — was, “How can I improve my health using only natural means?”

Special attention was given to healthy eating, and most listener questions addressed this topic. Organizers said that people approached facilitators and asked additional questions, received recommendations, and said they valued the information shared.

Besides advice on physical health, other parts of the program focused on the meaning and benefits of forgiveness, on how habits shape and affect our health, and on character development.

In the physical fitness segment, participants were led in simple exercises as they became acquainted with the benefits of physical activity for the body. They also were invited to check their weight and blood pressure, as well as their body mass index (BMI).

Both organizers and participants agreed it was a significant event. “We loved spending time in learning and reviewing how to enjoy better health,” they said.

This story is based on several news reports posted in the Euro-Asian Division news site.