In Mexico, Sheltered, Fed, and Cared For in the House of God 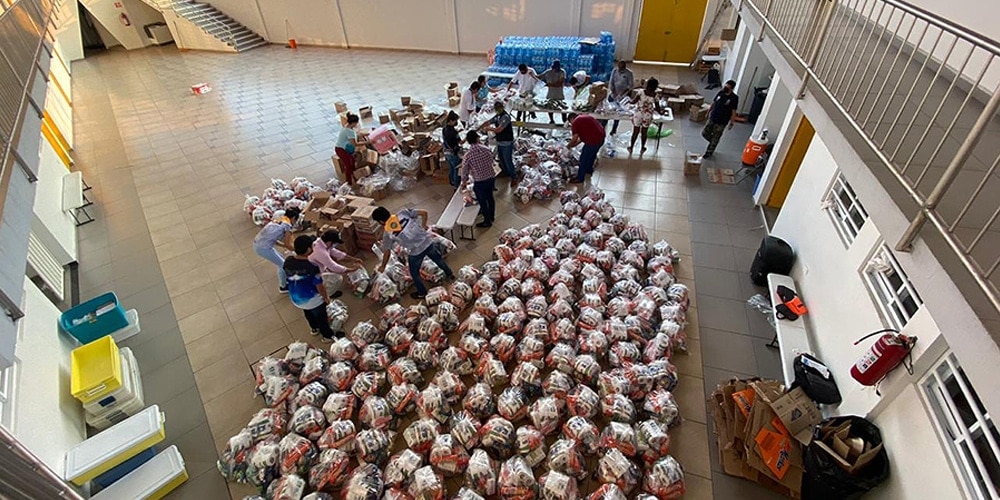 More than 150,000 people suffered damage to their homes and were displaced after Hurricane Eta crossed Central America in early November 2020, swelling the rivers and flooding communities in the state of Tabasco in southeast Mexico. In a region already saturated by the torrential rains from two previous hurricanes, Delta and Zeta, Eta’s downpours caused flooding two meters (6.5 feet) high, covering homes and forcing many to seek refuge in shelters.

Church leaders were able to account for members’ properties as early as November 5, and they began to transport people to churches operating as shelters and collect food and toiletries to assist those in need. The leaders reported that 3,778 Adventist families were affected. Most lost all their belongings as well as their homes. In addition, leaders reported, 102 of 259 churches were flooded across the state.

In a special message, Isaias Espinoza, president of the Adventist Church in southeast Mexico, reminded church members in Tabasco to cling to God. “As a church, we have one another. Let’s trust in the Lord because He is with us, so do not be dismayed.”

Church administrators toured Villahermosa, Tabasco, on November 7, to assess the damage and gather funds from church offices in the region to assist the affected families. Other unaffected conferences and missions across the southern states began collecting food to distribute to dozens of families.

The Nicanor Gonzalez Mendoza Adventist School in Villahermosa made its school bus available to transport dozens of people out of the flooded areas and into shelters. So far, 38 Adventist churches across the state have taken in displaced families and provided hot meals and medical, psychological, and spiritual care.

“In the Pomoca area, our brothers and sisters have been severely affected,” Humberto Lara, president of the South Tabasco Conference, said, “but they are supporting each other by sharing hot meals, clothes, and a place to rest.” He added that pastors are gathering support brigades to care for families in need in five of the most affected districts.

The Kalein Pathfinder and Master Guide Club from the Macuspana Adventist church helped to rescue people trapped in their homes and set up a base camp nearby with a community kitchen. The kitchen is serving 400 meals daily to those in shelters and families in need.

Erick López and his family are staying at the Febrero 27 Adventist church because a church member convinced them to shelter there. “My wife and I have never been through a flooding before, and we were really scared and came here mostly because of our children,” López said. “We have stayed here all these days and thank God that we are here, because we have been well treated.” López said he went to visit his home days later and found that the water had not receded. “It’s like the water is stuck there, and there’s no telling when it can be safe to get back home.”

The National Water Commission reported that the torrential rains this year have been historically high, exceeding widespread flooding in the region in 2007.

Once the water subsides, the church plans to help with cleanup in the communities most affected by flooding. In the meantime, the church continues to distribute food bags and boxes of rice, beans, oats, cornmeal, sugar, pasta, tomato paste, milk, water, toiletries, diapers, clothes, shoes, and blankets.

Unaffected church conferences and missions across Tabasco will be collecting special offerings among their constituents to provide additional assistance. The hope is to provide 20 tons of food to distribute among the three flooded conference territories in Tabasco, leaders said.