In Mexico, Church Leaders Give Back to Those Supporting the Church’s Mission 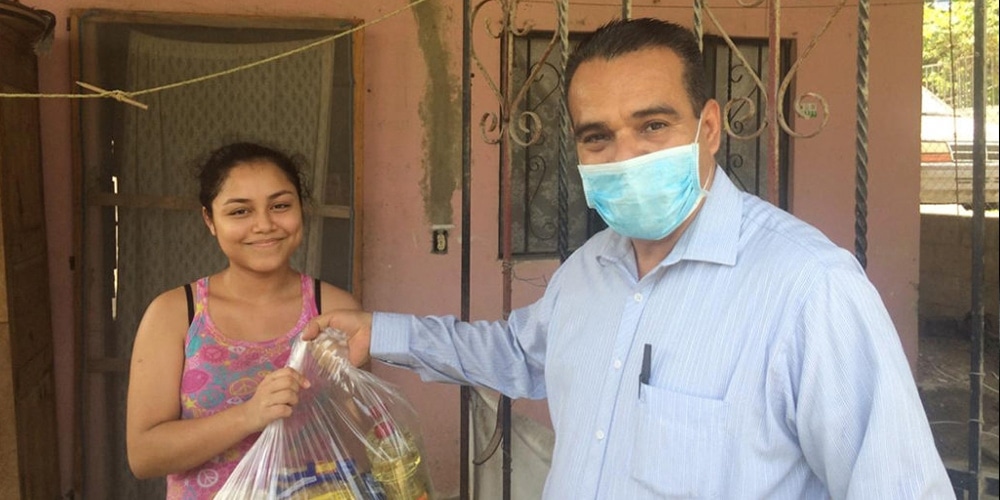 Some 13,500 Seventh-day Adventists across the Inter-Oceanic Mexican Union (UMI) church region received food and essential items for their families as Mexico continues its quarantine regulations. The families selected were among the neediest across eight states comprising a church membership of more than 203,400.

“Many of our members with their small businesses cannot work, and we wanted to make sure the church did something to help them,” said Moisés Reyna, president of the church in UMI. “The church is like a family, and it was the moment to join together to support them because our church is a family. It’s because of the faithful membership that the union and its eleven conferences and missions have always had resources to operate its churches,” he added.

Many of the neediest depend on the daily wages they receive from selling goods in the market or on the streets, church leaders said. The food bags delivered April 10-15, 2020, included non-perishables such as rice, beans, tortilla flour, pasta, boxed milk, oil, soap, and toilet paper.

UMI treasurer Antonio Rosas said that each one of the 247 church districts distributed to 30 of its most needy families.

“The union headquarters and the conferences and missions provided the funds for the initiative along with the pastors and members who volunteered to assemble and deliver the goods,” Rosas said.

Miguel García, pastor of the Diaz Mirón church district in South Veracruz, helped identify 30 families in need and deliver food to them.

“I could see the tears in their eyes because they feel loved by the church,” García said. “I could see that many were struggling and were so thankful for the goods. Many were asking me how they could submit the little tithes and offerings they had put aside for the church.”

Fabiola Morales was one of the members in Puebla who received the food bags of supplies in April. She was speechless at first when a church elder and his wife came to her house. She has attended the Las Cuartillas Adventist church with her two sons for several years now. She’s a single mother and has been battling an illness. “Thank you so much for coming all this way to bring this,” Morales said. “Thank you to all the members who took the time to support us here at home.”

“A member from the Mayorazgo Adventist church in Puebla was so thankful for the assistance,” Olvera said. “She lost her job as a secretary, and her husband, who is an engineer, is hearing impaired and unemployed. It was moving to see this faithful couple so thankful to God for the support of the church.”

Olvera added that the initiative is evidence of something bigger.

“[It] has shown the closeness that the church wants to keep with its members even when churches remained closed and small groups aren’t able to meet,” he said.

According to Olvera, the plan is to continue assisting those families in the coming weeks.

The Adventist Development and Relief Agency (ADRA) in UMI is planning to bring benefit to some 5,000 needy families across the territory during the month of May as well, its regional coordinator Daniel García reported.

“We are working on collecting funds to benefit families struggling through this crisis,” he said.

García said that church members who can contribute are committing funds to support the project to assist families in the community during a special distribution on May 23.

Gregorio Vásquez contributed to this report.