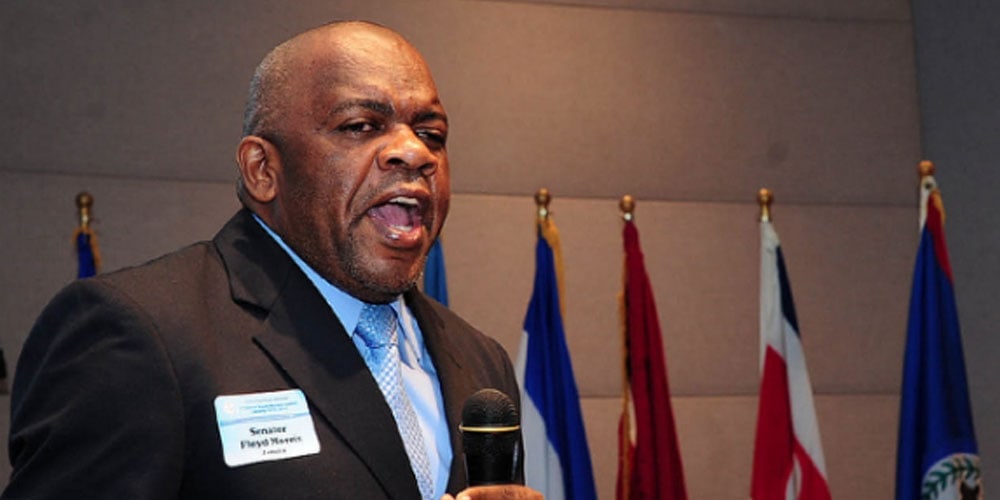 It is said that “Perfection is an unattainable goal, but it is in striving for it that makes us achieve greater levels of excellence.” This statement is true and reflective of the life of Floyd Morris, a senator in Jamaica who received the Doctor of Philosophy Degree (Ph.D.) from the University of the West Indies in Kingston, Jamaica, on Nov. 3, 2017.

Morris, the second blind person to achieve the highest level of academia at the university in its 69-year history, was one of eight visually impaired individuals who earned their degrees in the 2017 graduation exercises. He received his Ph.D. after defending his dissertation titled, “Mediated Political Communication in Modern Jamaica: Cases of Michael Manley, Edward Seaga and P J Patterson”- all former prime ministers of Jamaica.

Morris was among the 3,356 individuals who were presented with graduate and undergraduate certifications. He had individuals who assisted him with research and reading during his preparation for the degree.

“The successes that I have had to date can be attributed to my faith in God, family and friends, and a clear vision,” said Morris. “It’s not that I am brighter than anyone else but one of the things that blindness has done is to cause me to be very focused. I am not caught up with all the distractions that the world has to offer, so when I set my eyes on a prize, I remain focused on it, and God has been true to me.”

The 48-year-old senator, who created history in Jamaica’s Parliament when he became the first visually impaired person to be appointed President of the Jamaican Senate in May 2013, is a member of the Andrews Memorial Seventh-day Adventist Church in Kingston.

“The Church has been my spiritual compass which helped to guide me in my political and educational pursuits. Every action of my life, had been attributed to my spiritual growth and development and the Adventist Church has played a major role in that,” he said.

Advocate for the Disabled

Morris is well known in Jamaica for his fight for the disabled community, and for himself being a source of inspiration to disabled residents in attaining a high level of success, despite being blind from his teenage years, and his humble beginnings in a quiet rural farming district in eastern Jamaica. He has been credited with the passing of several bills and programs that have and still positively impact the disabled community.

“Senator Floyd Morris’ faith in God and selfless service to his church and the country has been an inspiration to members of the disabled community, the Seventh-day Adventist Church and Jamaicans all over the world,” said Everett Brown, president of the church in Jamaica. “The leadership of the Seventh-day Adventist Church in Jamaica and the members of the Church in general, congratulate and salute him for rising above the obstacles of physical disabilities to achieve academic excellence.”

Morris was a special guest of the General Conference at its 60th Session in San Antonio, Texas, on July 2, 2015, where he was recognized by the world church for his life of courage, service to his country, and faithfulness to the church.

In commending Morris, Adventist world church president Ted N.C. Wilson described him as a “modern-day Joseph,” who the Lord has given an unusual opportunity to witness in so many ways and who “represents Jesus and His church in arenas and areas that most of us do not have a daily connection to.”

At a special luncheon for Adventists in Public Affairs on Thursday, July 9, 2015, Morris was elected president of an international association of Seventh-day Adventists who hold a position in public, civic and government arenas in their country.

“Every disability should be accepted as an opportunity to show that man’s impossibility is God’s possibility,” said Adrian Cotterell, special needs ministries director for the church in Jamaica. “Morris did not allow disability to become an impediment; rather he accepted it as an inspiration to motivate him to defy the odds and reach the apex, characterizing his work with excellence. I congratulate [him] for this great achievement, which should go as an inspiration to the Special Needs Community to remind them that they are unstoppable when they focus on abilities instead of disabilities.”

Born in Bailey’s Vale, St Mary, Morris also created history in 1998 when he became the first blind senator. He began losing his sight at age 17 after he developed glaucoma in 1983, which led to his blindness in 1989.

But Morris decided that he had to march on, and so in 1991, after two years of trauma, he decided that he was going to reclaim his life. He did it by getting assistance from the Jamaica Society for the Blind where he received rehabilitation and learned to read and write Braille. Since then, Morris has moved on and has not looked back. He has since completed his bachelor of arts in mass communication and a master of philosophy in government and now his Ph.D. in political communication.

Morris is currently a senator in the Upper House of Parliament. He is the host of a radio program called “Seeing from a Different Perspective,” which airs on News Talk 93 FM on Mondays from 12:30 to 2:30 pm. He has been married to Shelly Ann since 2011 and enjoys playing dominoes and jogging four miles each workday with the aid of his driver.