In Haiti, Thousands Join the Church After Massive Evangelism Efforts The Seventh-day Adventist Church welcomed thousands of new members during a massive baptismal celebration held in Port-au-Prince, Haiti, on April 7, 2018. More than 15,000 were in attendance to worship, witness and celebrate the culmination of intense evangelistic efforts held throughout the capital city and the rest of the country.

Some 2,050 new believers were baptized at the stadium, and thousands more were baptized in four other main sites across the Haitian Union. The event was shown live on the Internet and a national television station.

The event represented Inter-America’s annual baptismal celebration coined as “Lord Transform Me,” where pastors and members across the Inter-American Division (IAD) territory are totally involved in the mission of the church as they live a transformed life in Jesus, explain IAD leaders.

Balvin Braham, assistant to the IAD president for evangelism and main organizer of the event, praised the work of the 230 preachers and hundreds of church members in Haiti.

“Thousands will give their lives to Jesus and live a transformed life, thanks to all of you,” he said. “Continue to preach the Word and help men and women accept the gospel of Jesus Christ.”

Caporal reported that 12,537 baptisms have taken place since evangelism efforts began in January. Figures are still not final, but Caporal believes that the church across Haiti will reach 20,000 new members, a number they anticipated six months ago.

Bursting with more than 459,000 members throughout its more than 1,100 churches and congregations, the church in Haiti continues to be the largest among the 24 unions, or major church regions in Inter-America.

During the live event, Caporal reported the progress of the church in its educational system, in religious liberty efforts, social work through the Adventist Development and Relief Agency (ADRA), the work for the family, children and disabled persons, as well as the service to the community through the Adventist Hospital in the capital.

Haiti’s Ministry of Worship general director Evans Souffrant spoke during the event and thanked the Seventh-day Adventist Church for their contribution to society.

“Your high presence today testifies of the commitment and organization of the Seventh-day Adventist church in Haiti,” said Souffrant as he brought greetings from the president and the prime minister. “I am touched by your statistics and how your religious institutions have grown so much.”

Souffrant thanked the church for the relationship with the government and how the church has stood out as a three-fold religious organization with its humanitarian, educational and social contributions since the church was established in 1905. “The Adventist Church has participated in the development of the country.”

World church Sabbath School and Personal Ministries director Ramón Canals spoke to the new and seasoned church members to be committed to fulfilling the mission of the church. “God has called you and every member of the Adventist Church to be involved in this movement,” he said. “Our mission is to call all people to discipleship, preparing others for the Second Coming of Jesus.”

Lyndon Lewis was among the 70 visiting evangelists who traveled to Haiti for a week of evangelistic campaigns. Lewis is a district pastor of three churches in Port-of-Spain, Trinidad. He said he enjoyed his first visit to Haiti and returns blessed from his experience preaching at the Providence Adventist Church, in Cap-Haitien, in the northern part of the country. The local pastor oversees 16 churches, but his elders and leaders are dedicated as they minister every week.

“Every night, the church saw some 600 people hear about prophecy, and it was amazing to see the dedication of the pastor and his local elders, deacons and deaconesses,” said Lewis. He saw 65 new believers join the church because of the discipleship efforts of so many members.

Eric Clarke, president of the North Bahamas Conference, led at Bible Auditorium Church, one of the biggest churches in Port-au-Prince. Clarke also saw the extraordinary leadership and structure of operation in the church.

“Every member knows his or her role as they serve the church,” said Clarke. He added that 50 baptisms took place in the three weeks previous to his visit, and 42 more signed up for baptisms at the end of the campaign he led.

The “Lord Transform Me” evangelistic celebration is not only about bringing in visiting evangelists and adding new members, but also about mobilizing more members to be involved in the mission of the church impacting their communities, said Braham.

The next celebration is scheduled for February 2019 in the Bahamas and Jamaica. 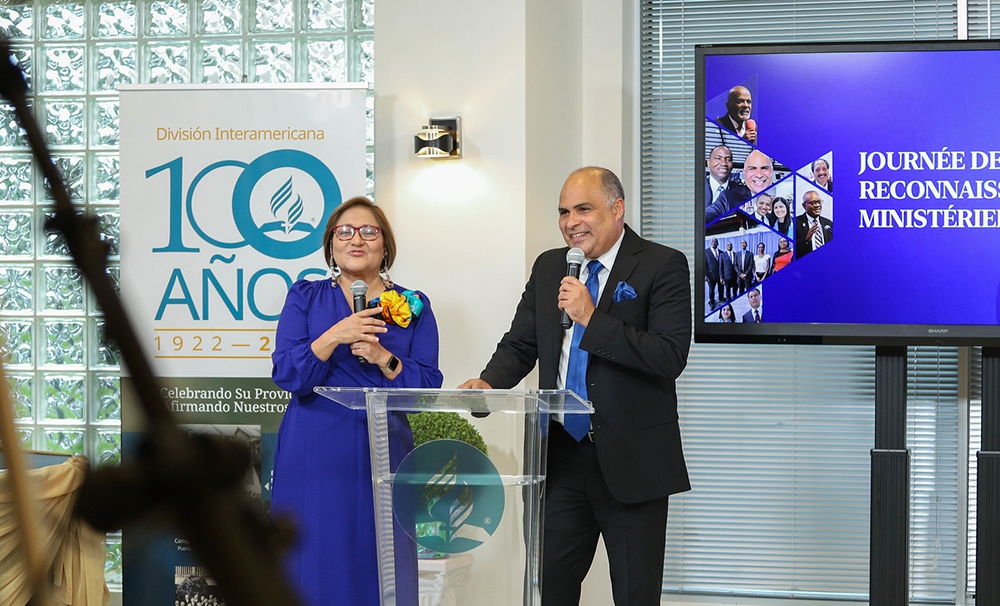