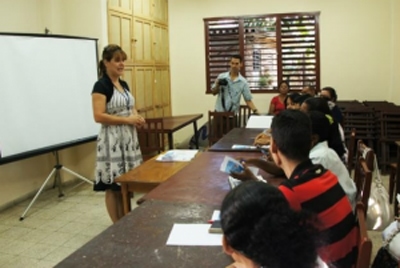 For years
Seventh-day Adventist communicators in Cuba have been vital in conveying and
transmitting information to church leaders and members on the island, which has
limited phone access and virtually inaccessible internet.

During recent
communication training workshops in the central part of the island, Adventist
young people, professionals and non-professionals met to learn and sharpen their
skills in news writing, radio broadcasting, and photojournalism.

Letting the
constituency know about initiatives, programs, and events is not seen so much
as a challenge by church leaders as an opportunity to work within the available
possibilities to communicate love and hope across the island, said Dayami Rodríguez,
communication and cultural director for the church in Cuba.

Rodríguez
explained that even though the church does not operate a radio station on the
island, each Sabbath trained communicators have a radio-format news segment
from the pulpit with sound effects where congregations learn about church news,
upcoming initiatives, and activities.

“With the dream
of one day having a radio program through the airways across the island or even
a television spot, we are preparing for when that moment arrives,” said Rodríguez.

The church also
prints small fliers and news bulletins on the world church, Inter-America, and
Cuba and delivers these throughout the island.

The two-venue
training workshops were also an opportunity to launch the new logo of Cuba’s
Society of Adventist Social Communicators, a society that was recently organized
to enlist dozens of communicators across the island so they can serve the
church and their communities more effectively.

“We want to elevate the culture of our
communicators to function better,” said Rodríguez.

The church has
been doubling efforts in the last two years in communication training workshops
in order to continue fulfilling the mission to build bridges of hope, said Rodríguez.

Rodríguez
explained that each of the four church regions on the island is working on
designing their websites and establishing their own recording studios.

Plans are
underway to print a national newspaper for church members and hold an
island-wide communication summit next year.

The church in
Cuba operates three conferences and one mission, and has more than 33,000
members worshiping in 307 churches. The church also operates a theological seminary.