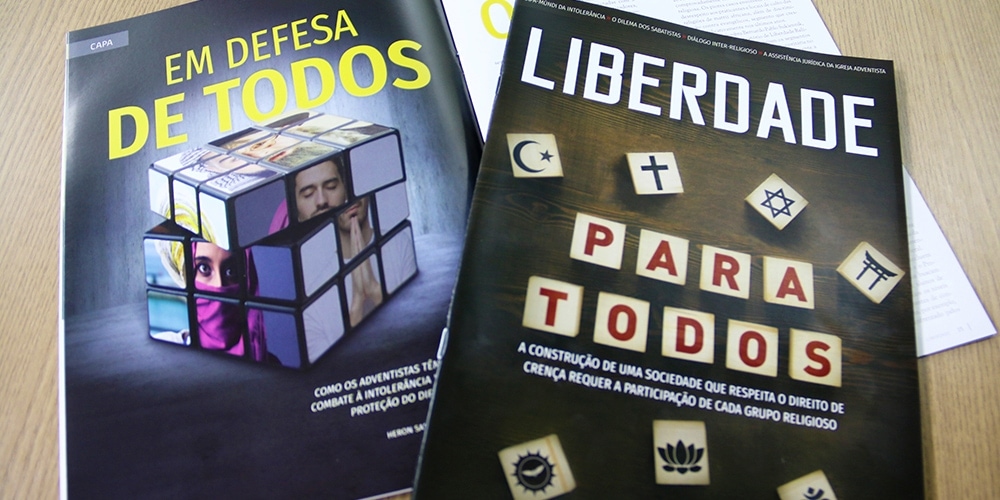 A new magazine published by the Seventh-day Adventist Church in the South American Division (SAD) region will attempt to introduce and explain the Adventist position on religious liberty to decision makers such as politicians and lawmakers in Brazil. Its first issue in Portuguese is just off the press of the Brazilian Publishing House, regional leaders reported. It is anticipated that the Libertade [Liberty] magazine will support the efforts of the Adventist Church in an area, leaders say, is a key component of the work of the church in South America and around the world.

Carnassale added that a good example of this is what happens in the Window 10/40, a region of the world where most of the population does not belong to any Christian religion. “Why do we have so many difficulties in preaching the gospel there?” he asked. “Because there is no [religious] liberty—there are many government restrictions, hostilities by many in the population itself, and there is usually one official religion and a lack of Church-State separation.”

Religious liberty, said Carnassale, is a precious heritage we have been handed, which goes hand in hand with our mandate to preach the gospel. “It is essential for the existence and the mission projects of our church,” he emphasized.

Showing that these are not just words or wishful thinking, church leaders said that the Adventist Church in South America is committed to defending the cause of religious liberty through concrete actions, awareness events, and now hard-copy resources. The first issue of the Libertade magazine was released on May 7, 2018, during the SAD Executive Board session, a business meeting of the church leaders across that eight-nation territory.

“[The magazine] looks to reach out to people who do not share our religious convictions, so that they can get to know our position on the topic,” said Carnassale, who is also the executive publisher of the new magazine. “It will also serve as an information and educational resource for Adventist pastors and leaders.”

Magazine writers also show the publication’s diversity. Its various features enlist professors and researchers, lawyers, journalists, and theologians. According to Carnessale, content has been developed in a way which meets the demands of both experts and the general reader.

With an initial print run of 10,000, it is the first resource of this kind for the Seventh-day Adventist Church in the SAD. Future issues will depend on the public acceptance of this first issue, said Carnessale. “We will carefully monitor and assess the public’s reaction to the magazine,” he said.