Editor's note: This is the first in a series by news editor Andrew McChesney about how Seventh-day Adventists in South America are using technology to spread the gospel.

That’s exactly what a Seventh-day Adventist church did in Brazil, and it is pleased that church members have stepped up their involvement in church activities as a result.

Leaders of the Central de São José dos Campos church found that the colorful, folded bulletins were costly to produce, they tended to run out before church services ended, and many wound up in the trash.

So they came up with an alternative: a WhatsApp bulletin.

Since February, the church has been using the free mobile app to send a digital weekly bulletin packed with the same information as before: the Sabbath worship service, church activities, special regional events, and health tips.

The only difference is people are actually reading it — and participating in church activities like never before, church leaders said.

Adventist believers in South America are known within the world church for their use of the latest technology to spread the gospel. The church has so many active Twitter users in South America that it can make hashtags trend, as happened last month when three hashtags used by Adventists during the church’s Global Youth Day made the Top 10 list of trending hashtags in Peru. The Facebook page of the Adventist Church in Brazil has more “likes” — 1.09 million — than any other Adventist entity worldwide.

‘This Is an Exception’

But discontinuing the printed church bulletin is unusual even for South American believers, said Felipe Lemos, director of the press office of the Adventist Church’s South American Division. He was aware of at least four other Brazilian churches, including the Barra da Tijuca church in Rio de Janeiro, that send church bulletins via WhatsApp. But those churches also continue to publish paper bulletins.

The São José dos Campos church, he said, “is different. This is an exception.”

WhatsApp is a natural way to swap information in Brazil, where many people use the app that allows free phone calls and the free mailing of attachments. Young people are especially glued to WhatsApp — a fact observed by Gerson Miranda, the communication director of the Central de São José dos Campos church, when he and Cotacallapa were tasked with finding new ways to encourage church members to become more active in church activities. Only a few of the church’s 300 members were participating in church activities at the time.

Miranda noticed that a few church friends in the local São Paulo region where he lives were sending each other church bulletins via WhatsApp. So he proposed that his church set up an official WhatsApp account to distribute the bulletin every Friday.

After a month of research and discussions with church members, the church board approved the plan. Cotacallapa began to send the bulletin on Fridays in February.

“People use WhatsApp to communicate everyday, so this is another way for them to get news,” said Cotacallapa, a native of Peru who is studying for a doctorate in computer science.

“Why shouldn’t they get it from the church as well?” he said, speaking on the sidelines of a GAiN conference of some 300 South American communication specialists in São Paulo.

The São José dos Campos church’s communications team has looked at several ways to encourage members to participate in church activities. It is re-launching its website with a template provided by the General Conference, the administrative body of the Adventist world church. It also has added video to its Facebook page. The video has proven popular, Cotacallapa said. The church used to fill its Facebook page with dozens of photos of church activities every week. But it found that many church members didn’t have time to look at all the photos. So now it posts a weekly video roundup of all the church activities from the past week. The video, which is never longer than a minute, is engaging church members as well, Cotacallapa said.

“People see themselves and go, ‘Hey, I’m in the video!’” he said. “So they feel important participating in activities. They feel like they need to participate more because their participation is important for the church.”

Church members have largely embraced the changes, particularly the move to the paperless bulletin, Cotacallapa said.

“Printed bulletins cost our church a lot of money, and many people only found out the news about church activities when they received the bulletin on Sabbaths,” he said.

Although the change to paperless church bulletins is relatively recent, Cotacallapa already considers it a success.

“In many ways this has improved the communication of the church,” he said.

Profile
Asteroid Gets Name of Adventist Teen in Brazil
Bruna Pontes is one of the youngest people to officially lend her name to an object in space. 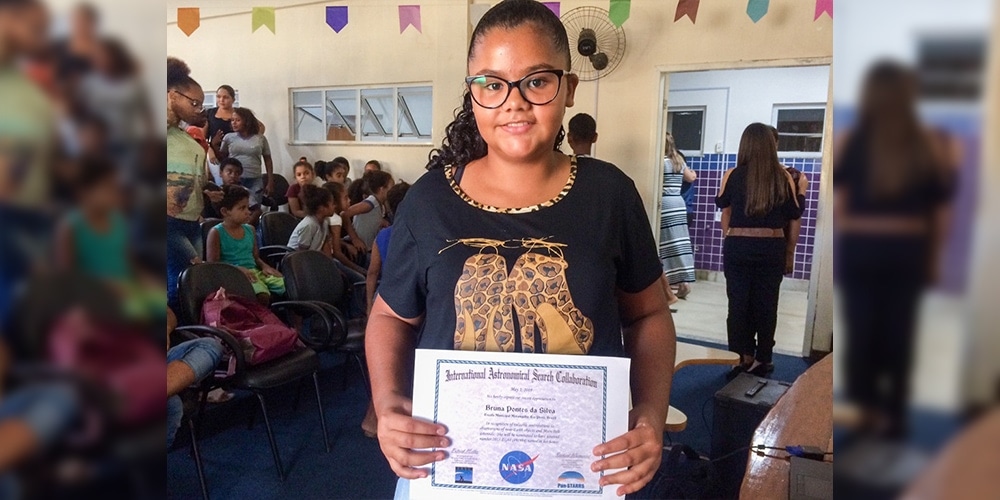