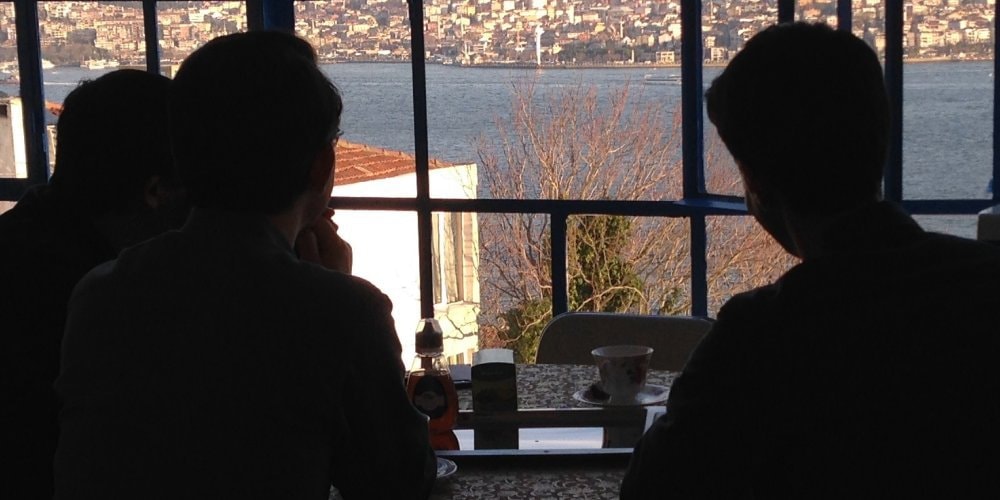 Editor’s note: Abdullah, a Seventh-day Adventist believer, was forced to flee his homeland in the Middle East recently. The Adventist Review has changed his name and is not identifying the country to protect his safety.

A friend surprised me three years ago by disclosing something I never expected to hear.

When we met one day, he exclaimed, “I have a very good feeling!”

“Because I feel like a newborn, innocent baby,” he said.

“Why do you have such a feeling?” I said.

“Because two days ago I got baptized.”

You see, several years earlier a group of my countrymen had come up to my wife and me on the street while we were on vacation abroad. They gave us a Bible and invited us to visit their church. This happened on a Friday, and their church met on Sunday.

We didn’t believe in God, but we weren’t atheists. My wife and I were curious to know about Jesus Christ, so we went to the church. But we were not impressed. The men kissed one another at the door. The worshippers walked backward into the rented hall, which was filled with icons and idols. It was all very new to us.

But my newly baptized friend said his church was nothing like any church that I had ever seen. He said his church followed the Bible, and its beliefs and doctrine were different from other denominations.

I wanted to learn more. I felt that I needed something and hoped in my heart that God would lead me in the right way.

My friend gave me contact information for a Seventh-day Adventist pastor.

Immediately I called the pastor and asked if my wife and I could study the Bible with him.

The pastor, however, was on a trip, so I had to wait impatiently for a few days. I was so eager to learn more.

My wife and I studied with the pastor for nearly a month. I was attracted to the Adventist lifestyle of a healthy diet and no smoking or drinking.

Finally, the pastor asked if we thought we were ready for baptism. We said yes and were baptized secretly a short time later. People who are discovered to have been baptized are often arrested by the authorities.

Just a few months after being baptized, I began taking biblical materials and Ellen White books to various cities. I also gave Bible studies and led lifestyle seminars, while holding onto my job in the private sector.

Because of the need for secrecy, it is often hard to know who is a believer and who isn’t in a land that was once part of ancient Medo-Persia.

Once I was eating at a café and overheard the waiter, who happens to be a relative of mine, ask a group of foreign tourists if they could tell him anything about Jesus. I pulled my relative aside and whispered: “I can do better than that. Would you like a Bible to read?”

He was surprised and asked if I was a Christian. I said, “Yes, I am!”

I gave him a Bible, and he read it with great interest. Today he is a member of the Adventist Church.

I’m not sure what went wrong, but I know Satan is on the attack in every possible way.

For some reason the authorities started calling me about six months after I was baptized. They asked my wife and me to come to their offices. They asked me to come by myself. They asked if my parents were Jews. I don’t know how, but they knew that I kept the Sabbath.

One day they told me: “You know English well. You can help us. We need you to be our worker.” They asked me to keep an eye on my work colleagues. At first I thought they were looking for a spy because they asked if any had shown an interest in nuclear technology. I said, “No.”

Things got worse quickly a few weeks ago. They approached me on the street one evening instead of calling me to go to their offices.

They asked a lot of questions. I didn’t want to lie, so I answered their questions with questions. When one of them asked me whether I had been baptized, I said, “What does it mean to be baptized?” The man explained everything that could be said about baptism — facts that I know very well. Obviously he knew a lot about what was going on.

“There are many people who are interested in Christianity and Jesus Christ. We don’t want this to continue,” the man told me.

“What’s the problem if people become Christians?” I said.

“For me it’s not important if one or two people become Christians,” he replied. “The problem is if many people have these beliefs, then it is harder to control them.”

The man then spoke at length about house churches, the places where many Christians worship in my country. He seemed to know everything about them.

When I got home I was so nervous that I had trouble sleeping. When I finally did fall asleep, I only managed to sleep for about an hour before my cell phone rang. The phone’s screen did not show a number for the incoming call, reading only, “Private number.” That is the text that appears when the call is from the authorities.

The male voice on the other end of the phone said: “What is ADRA? What exactly are you doing?”

He asked many, many questions. I don’t know why he mentioned ADRA. He reprimanded me, saying, “You are not our faithful worker.”

An Adventist friend heard about the authorities’ sharp increase in interest in my activities and advised me to leave the country as soon as possible. He himself had been arrested and tortured for several weeks last year. The authorities had wanted him to reveal the names of other church members, but he had refused and was finally released.

So I left my homeland.

I don’t know what’s going to happen next. I’d like to further my education while I continue to pray for the people of my country.

My greetings to my brothers and sisters around the world. Please pray for us and for the many people in my country who are hungering and thirsting to know more about Jesus.

Editor's note: News editor Andrew McChesney is currently traveling in the Middle East and reporting on Adventist work in the region. For a list of all stories, follow the links below: