How Adventist Medical Missionary Work Protects the Mission of the Church 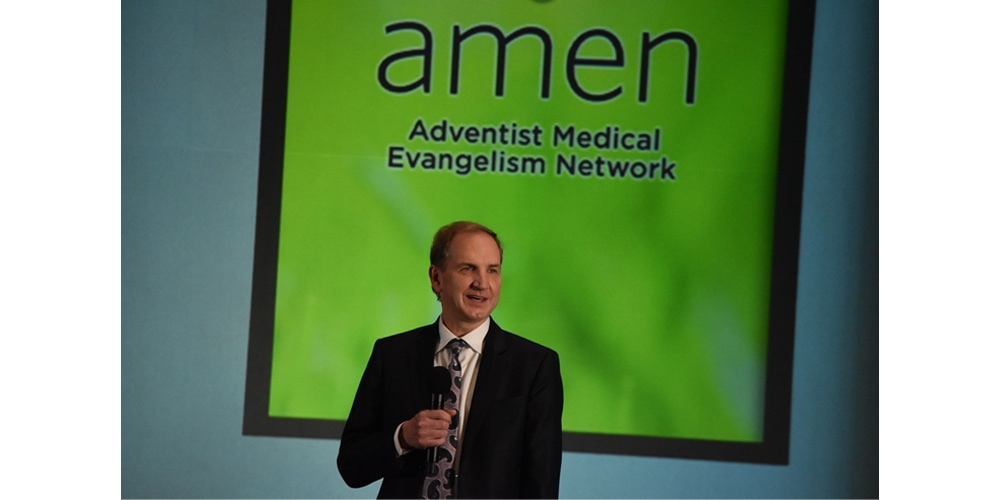 In his October 28 keynote address at the AMEN annual conference in Indian Wells, California, United States, Schwartz discussed how health work, as that right arm, can “serve to protect the body” and support the mission of sharing the gospel of Jesus.

Adventist medical ministry can bring many benefits to the Adventist Church and its mission, Schwartz emphasized. First, he said, “it indemnifies us; it gives us protection.” Schwartz explained that medical ministry gives Seventh-day Adventists visibility and positive exposure to the public. “When we are engaged in medical missionary work, the media pick up on that,” he said. “The press is a little more careful with us. They see we are concerned about people, and we are presented in a better light.”

Second, doing medical missionary work gives Adventists credibility. “If I take care of my patient’s diabetes, heart disease, or whatever it is, and I do a good job, they are more likely to listen to me about other things,” Schwartz said.

According to Schwartz, medical ministry also shows the gospel in action. He shared an experience at one of the public free clinics the Adventist Church has offered, which on that occasion was in the city of San Antonio, Texas. As Schwarz was taking care of a patient with high blood pressure, the patient asked him, “Who are you guys? Are you sponsored by the government or something?”

Schwartz shared that his team told the patient they were Seventh-day Adventists and that Jesus had called them to take care of the needs of the less fortunate and those around them. “He had never heard about that faith,” Schwartz said.

“You are not paid to do this?” the man asked, as he could see there were thousands of volunteers giving their time for that initiative. When the patient received the assurance that, in fact, it was a free and selfless service, he jumped up and cried out, “I can’t believe this! Nobody does this! I want to be a member of your church!”

“He had never had a Bible study; he didn’t know what Seventh-day Adventists were, but he saw the gospel in action, and he wanted to be part,” Schwartz said. “That is the power of medical missionary work, and we are called to engage in that with every patient, every day.”

Schwartz also emphasized that medical missionary work engages Adventist church members. “It gets Adventist young people involved. It energizes Adventist churches, so they do something useful for the community that opens the door for evangelism,” he said.

Moreover, based on Bible prophecy, Adventists believe there will be a time toward the end of this world when believers won’t enjoy many of the freedoms they now have, Schwartz reminded his audience. At that time, “medical missionary ministry will allow Seventh-day Adventist to work, even when it becomes hard for every other line of work to do so,” he said. “So even after we can’t buy or sell, I believe medical missionaries will be able to reach where a pastor or a [literature evangelist] cannot go.” This is the reason, he said, that ministerial work and medical missionary work must be completely blended, working together on God’s mission.

By way of example, Schwartz told about the CEO of a Fortune 500 company who flies in a private jet and lives in a gated community. He is someone “who will never be seated next to me no matter what class I fly,” he said. “But he comes to my office.” The same happens with the chief of two fire departments and a police chief, and even with a homeless shelter resident across town. “[Adventist health-care professionals] have access to people from all walks of life. It’s a sacred calling to be part of medical ministry,” Schwarz emphasized.

He added that “by using the right arm of the gospel, we have access to people’s hearts. It opens the door.” And, he explained, “when churches engage in medical ministry, it opens the door to bring people to church in a way that they don’t feel threatened and challenged. And when they have a good experience, and they make friends, and they are invited to come back for an evangelistic meeting, they are much more likely to do it."

Another interesting thing about medical ministry, according to Schwartz, is that it is self-funding. "Done right, it pays for itself; done right, it can pay for other things as well,” he said.

At the same time, Schwartz emphasized, Adventists should resist the idea that medical ministry can only occur in a self-supporting institution. “Every Adventist health-care institution must get involved, from the biggest hospitals to private practice offices. Every one of these places is called to engage in medical ministry,” he said. He quoted Ellen G. White, a co-founder of the Adventist Church, who wrote, “Every facility for the advancement of God’s cause is to be put into use.… We must take advantage of the means the Lord has placed in our hands for the carrying forward of medical missionary work” (Medical Ministry, p. 327).

So the challenge, Schwartz said, is not to make Adventist health-care institutions purely medical; in that regard, their leaders forget the primary call they have to spread the gospel. "It’s not just talking about a plant-based diet; that’s not what we are called to do. It’s to give the gospel combined with the medical ministry,” Schwartz told his colleagues. “This is a consecrated work; this is a blessed work; [and] God is going to see this work through.”