The Waldfriede Health Network, a facility managed by the Seventh-day Adventist Church, recently took over “Arche,” a Senior Citizens’ Center located in Berlin. Founded in 2007, the senior care facility was built on a 1.3-acre (5,300-square-meter) plot of land and employs 60 people, who care for 84 residents in 70 single and seven double rooms. Run by Gabriele Jänike and under a new name, the “Seniorenhaus Waldfriede” facility is located in the same district of Berlin as the Health Network. Waldfriede stated that the network has solidified its place now as one of the largest employers in the district.

Thanks to its last acquisition, Waldfriede is expanding its network in the field of elderly care. It is an area of special care that Waldfriede had not yet expanded into, according to Bernd Quoss, hospital CEO and secretary of the Health Network Board. He also believes it is an appropriate and suitable addition to the Christian nursing image of the Waldfriede Hospital.

Because of the resulting synergies, the Seniorenhaus will integrate very well into the existing network. “It is nice that we can now also make a social and political contribution with excellent accommodation and care possibilities for the older generation in the district, where many senior citizens live,” said Quoss.

The basis for the quality care and support in the Seniorenhaus Waldfriede is a model of holistic health, according to the institution’s leaders. “The goal is maintaining the residents’ skills, promoting self-reliance, and providing an environment that offers well-being, security, and stability,” they said. The institution will include animal therapy as one of its options to foster the well-being of its senior residents.

Waldfriede Hospital is a teaching hospital which includes 160 beds and eleven departments. Since 1920, its medical approach “has been based on the notion of holistic prevention and therapy to benefit every human being” said Quoss. 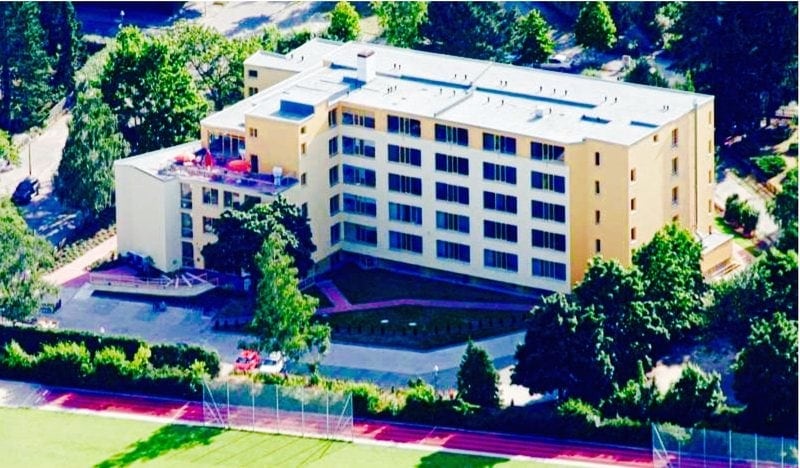 In addition to the hospital, a comprehensive health network has been established over the past few years, which is in constant development. Accordingly, the Waldfriede network would become the most diverse medical and nursing care provider in South-West Berlin, and with around 950 employees, one of the largest employers in the district.

According to Quoss, until 1989 Waldfriede Hospital, and its current Academy for Health Care and Nursing, was just an acute services hospital lacking a proper network.

In 1989, Waldfriede Welfare Center was founded on the premises of the hospital. It is still active in outpatient home nursing in the district, currently caring for 180 patients. The PrimaVita Health Center was also founded in 1993 on the premises of the hospital. Every year, the PrimaVita Center offers courses and training to 5,000 people. Since 2008, it has added a swimming pool and sports facilities. The center also started offering medical check-ups in 2010.

In 1999, the Waldfriede Service Organization Hospital, responsible for hospital cleaning services, kitchen operation, and food supply, was founded. And in 2012, the Privatklinik Nikolassee became part of the health network with a villa and room for 16 patients with psychosomatic or psychological disorders.

The Adventist Health Network has sponsored or supported other special community well-being and health programs. Since 2000, the Waldfriede Hospital has been offering “Baby Crib,” a comprehensive consulting and support system for mothers in need. And in 2013, it launched the Desert Flower Center Waldfriede, where women affected by genital mutilation receive medical assistance and psychosocial care.

Seniorenhaus Waldfriede will be in full operation in June, said Quoss. “And we are already working to open a new day clinic specializing in psychosomatic and addiction disorders, depression, and burnout,” he said.