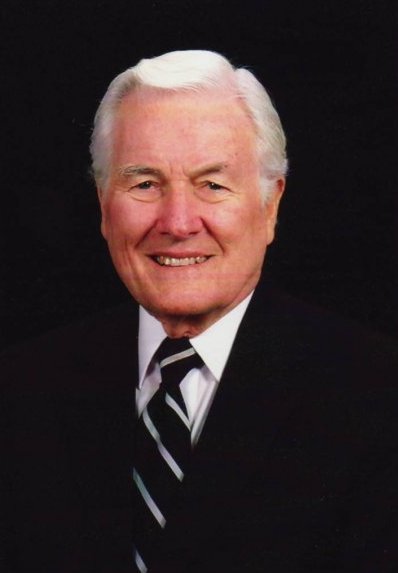 Herbert E. Douglass, a leading Adventist theologian, administrator, and prolific author, died this week after a long illness. He was 87.

Others may associate him with his more than 25 books and scores of magazine articles centered around his favorite topics of Jesus as an example, Ellen G. White as the Lord's messenger to God's remnant church, the preparation of people for Jesus’ soon return in what is called the harvest principle, and “the Great Controversy theme,” which holds that life’s greatest questions turn on human’s response to Jesus and His law. Days before he died on Monday, Dec. 15, he finished work on his last book, an as-yet untitled manuscript about the Roman Catholic Church.

But Douglass, whose eloquent advocacy of historic Adventist theology prompted many lively discussions throughout the church, confided to a friend shortly before his death that he wanted most of all to be remembered as a kind person.

“He told me that he would like to be remembered as someone who was kind,” said Don Mackintosh, chaplain at Weimar Institute who spent hours at Douglass’ bedside at a California hospital.

Douglass will no doubt be remembered as he wished. No matter what people thought of his theological reasoning, they agreed that he was always considerate, respectful, and eager to offer encouragement.

“He took a strong interest in people and their theological understanding,” said Ted N.C. Wilson, president of the Adventist world church, and a friend of Douglass’ for many years.

“He cared deeply that we maintain our doctrinal distinctiveness as Seventh-day Adventists and encouraged me to think clearly about what we believe as a church,” Wilson said. “His commitment to Bible truth will continue to inspire me and many others as we look forward to Christ’s soon return—a subject he dearly loved.”

Wilson joined other prominent Adventists in paying tribute to Douglass.

"He was certainly an iconic figure in Adventism,” said Edwin Reynolds, a biblical scholar and professor at Southern Adventist University. “His wit and wisdom were monumental, even if you didn't agree with him in everything. As both an academic and a theologian, he was a thought leader. May his tribe increase.”

George R. Knight, a historian and author who was often at loggerheads with Douglass, said he and Douglass wrote widely on the issues on which they disagreed but still respected the other's integrity and honesty.

“We both expressed strong opinions on topics upon which we disagreed, but our relationship was always one of cordiality and respect,” Knight said. “I think we both understood that being a Christian in our relationship was in the long run more important than the doctrinal issues that divided us.”

How Douglass Became an Adventist

The eldest of five boys, Douglass became an Adventist at the age of 14 or 15 after walking by a tent where evangelistic meetings were being held one summer and curiously going in. Through his encouragement, his mother joined the Adventist Church, followed by his four brothers and then his father.

“He became a Seventh-day Adventist and brought his entire family into the church,” his son, Herb Douglass, said by phone.

The elder Douglass became a pastor after graduating from Atlantic Union College in 1947 but soon entered the world of academia as a theology professor at Pacific Union College, where he worked from 1953 to 1960. His first taste of serious writing came when he was invited to work with a team of editors to produce the eight-volume Seventh-day Adventist Bible Commentary. He wrote the commentary for five books of the Bible from 1954 to 1957.

Douglass increasingly became engaged in writing after he received a doctorate in theology from the Pacific School of Religion in Berkeley, California, in 1964.

“People were asking me for different viewpoints on this subject and that subject,” Douglass said in a 2009 television interview. “Before I knew it, they asked me to become an associate editor of a church paper. Before you knew it, I began to write and I enjoyed it. And other people seemed to want more, so I kept writing.”

Among his best-known books are Messenger of the Lord (1998), widely considered the most comprehensive book written on Ellen White’s prophetic ministry, and Why Jesus Waits: How the Sanctuary Message Explains the Mission of the Seventh-day Adventist Church (1976). He also made waves with a 1985 Ministry magazine article titled “What Human Nature Did Jesus Take?” in which, writing under the pseudonym Kenneth Gage, he made the case that Jesus took sinful human nature and "was tempted in all points like as we are yet without sin."

George W. Reid, former director of the General Conference’s Biblical Research Institute, and a friend of Douglass, noted that Douglass came under many sharp attacks for his views.

“He was deeply criticized by the left-leaning scholars such as those involved in Spectrum and similar publications,” Reid said. “Some of their critiques wounded him, although he tried to maintain a civil relationship with them. They treated him as an uncritical promoter of Ellen White, disregarding her flaws, hence a spokesman for the leadership.”

But perhaps in an indication of Douglass’ determination to remain a gentleman and keep the focus on Jesus, he also contributed a number of articles to Spectrum and like-minded publications.

Douglass said he was motivated by one thing alone: the soon return of Jesus.

“That to me is the overreaching reason why I do anything,” he said in the television interview, conducted by Adventist-affiliated Better Life Broadcasting Network. “I want people to be aware that this gracious Lord who is running this universe wants us all in His heavenly family. And so whatever I do, I’m just trying to work that person or crowd in such a way that they say, ‘Hey, that makes sense.'"

Baseball and the Sabbath

His son Herb, 64, said this attitude combined with his father’s example of practicing what he preached greatly influenced his life.

The younger Douglass said the most memorable moment with his father took place when he was a boy of about 13 playing a Little League baseball game in a Catholic community in Massachusetts. The umpire had failed to show up for the game on a Friday afternoon, and his father, a big baseball fan, volunteered to step in after a lengthy wait. But as the shadows grew long, parents in the stands began to call out in a questioning and joking tone, “Hey, Douglass, the sun is starting to set. Are we going to have to call the game?”

Herb Douglass said he was amazed that the other adults knew his father by name and understood his convictions. But what happened next surprised him even more.

“What was so profound for me was that he just looked at me and the crowd and said, ‘I think we have enough time to get the game in. Play ball!’” he said. “When we left the parking lot, we had to use our headlights.”

With his voice choking with emotion, Herb Douglass added: “What that taught me as a kid is there is more to Christianity than just the rules.”

IN FIRST PERSON: Douglass discussing his life and legacy in a 28-minute television interview with Henry Martin of the Better Life Broadcasting Network in 2009.

Herbert E. Douglass’ deteriorating health left him unable to see the keys on his computer keyboard for the last six months of his life. But he kept working on his final book, which his son said brings current events into the last-day events of the Bible and centers completely on the Catholic Church.

“One time he told me, ‘I have been working all day and I have only gotten one paragraph written,'” Herb Douglass said.

He said the writing process was painful to watch since his father once had been able to complete several pages a day.

“But he was able to finish that book,” he said. “Just before he passed away, the editor of the book called Mom and said it was going to press.”

The book is to be published by Pacific Press.

Douglass is survived by his second wife of 39 years, Norma, who is four months older than him, and six children from his two marriages. His first wife, Vivienne, died about a year ago. He also has eight grandchildren and nine great-grandchildren.

A memorial service is planned for January or February.

Asked in the television interview what advice he would offer others, Herbert Douglass pointed to his favorite Bible passage, Proverbs 3:5-7, which he said he repeated day and night.

He recited it out loud, adding a little of his own interpretation: “‘Trust in the Lord with all your heart and lean not on your own understanding. In all thy ways acknowledge Him’ as your Lord and your magnificent Friend, and—as the Hebrew says—He will smooth your path.

“The next line,” he said, referring to verse 7, “leaves me where I ought to be: ‘Be not wise in your own eyes.’

“Marvelous!” he exclaimed with a smile. “That’s my medicine for the day and night.”

Douglass' 1985 Ministry magazine article, “What Human Nature Did Jesus Take?” which he wrote under the pseudonym Kenneth Gage (PDF)