Her Influence Turned 10% of Ukrainian Town Into Adventists 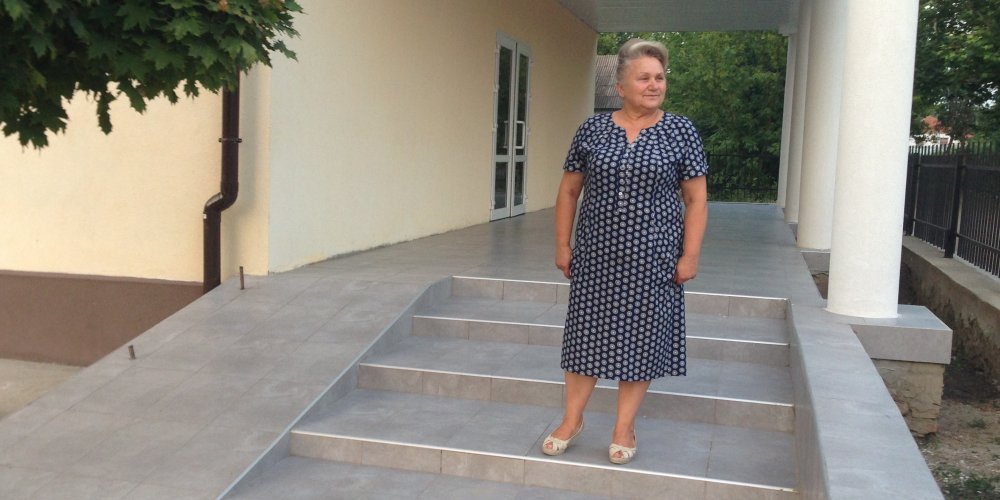 Say her name to any of the 1,400 residents of Bugskoe, and the response will be similar.

Moskalenko was the first Adventist in this sleepy Ukrainian town in the early 1990s, and her influence has resulted in a remarkable 10 percent of the population joining the church. No other municipality in Ukraine has such a large percentage of Adventists among its population, Ukrainian church leaders said.

Moskalenko also is the leader of the Bugskoe Seventh-day Adventist Church, a position that she didn’t seek and is a far cry from her days as a power plant worker who wore short skirts and feared eternal damnation.

“Our church does not end at its walls,” Moskalenko said. “Our church is the whole town.”

The story of Seventh-day Adventism in Bugskoe is the story of Moskalenko’s own conversion, a process that started in 1989 when a coworker asked her for a tube of lipstick.

Bugskoe did not have a church of any sort when Moskalenko arrived with her husband, Vladimir, in the waning days of the Soviet Union. Bugskoe is located about 50 miles (80 kilometers) from the nearest major city, Mykolaiv, a Black Sea city with a population of half a million. It took an Adventist Review reporter about 2 ½ hours of careful navigating on badly potholed roads to reach the town.

After some time in Bugskoe, Moskalenko missed attending Sunday Orthodox services back in western Ukraine. So she was thrilled when her husband, who helped run a collective farm, received a large Bible as a gift from a Baptist acquaintance.

“I began to read from the very beginning, and I immediately started to receive answers to questions that had bothered me,” she said. “The first question was why do women have pain during childbirth? I had always wondered about that. I found answers to many, many questions in the Bible.”

For her work, Moskalenko needed to travel several times a month to the town of Nova Odesa about 20 miles (30 kilometers) away. She also made extra money by furtively selling hard-to-find cosmetics, which she obtained from a friend.

A Request for Lipstick

During one visit to Nova Odesa, a coworker named Tanya approached Moskalenko with a hushed request for lipstick. Tanya was not regarded as a pleasant coworker — “You could always hear her yelling at work,” Moskalenko said — and her query surprised Moskalenko.

Moskalenko, who was 28 at the time, was surprised again when Tanya said she wanted a very light tone of lipstick.

“Why do you want that kind? It’s barely visible. Does your husband not allow you to wear lipstick?” Moskalenko said, smiling slightly as she recounted the incident to the Adventist Review.

“Then why?” Moskalenko persisted.

“Are you a believer?”

When the shock wore off, Moskalenko asked where Tanya attended church and whether she could go as well.

Moskalenko agreed but asked, “Why Saturday?”

When Saturday arrived, Moskalenko had second thoughts. It was the weekend, and she wanted to sleep in. But she remembered her agreement with Tanya.

In Nova Odesa, Tanya led Moskalenko to a small, simple building. But Moskalenko felt like she couldn’t enter the door. Something was stopping her. She said to Tanya: “I can’t go in. It’s so strange.”

“You have to go in,” Tanya said. “It’s Satan scaring you. He’s holding you back.”

Moskalenko said she would never forget what happened next.

“I remember stepping in like in a fog,” she said. “But as soon as I entered, I saw a crowd of people racing toward me with outreached arms. They greeted me as if they had been waiting for me their whole lives. They hugged me and kissed me. They were so happy.”

Moskalenko shyly took a seat in the corner. Dressed in her favorite apparel — a short skirt, a low-cut blouse, and lipstick, all bright red — she felt naked. But she forgot her self-consciousness as she listened to the pastor. It seemed as if he had prepared the sermon just for her, she said.

“The pastor said: ‘If you accept Jesus, you are forgiven, your sins are taken away from you, and you will not face judgment. You will be free,’” Moskalenko recalled.

The words stunned Moskalenko. Growing up, she had repeatedly heard from her Orthodox parents that she should be good because she would be judged for all her sins at the end of time.

“For years I wondered where I could hide my sins so I wouldn’t be judged for them,” Moskalenko said. “No one told me about Jesus and why we needed to believe in Him.”

A Picture of Jesus

Her knowledge of Jesus came from a picture.

As a girl, she had pointed to a picture and asked her mother, “Who’s that?”

“Why is he in the picture?”

“And who’s that, Mama?” she had asked, pointing to another icon.

“He was crucified for us.”

Moskalenko had thought, “Fine, He was crucified. What does that have to do with me?”

But now the Adventist pastor was declaring that Jesus’ death meant she did not need to stand in judgment if she only believed in Him.

“When you worry about judgment for 28 years and suddenly you are told that you can be free, the feeling is indescribable,” Moskalenko said. “On the bus on the way home, I told everyone: ‘It turns out that we are forgiven. You just have to believe and accept!’”

But Moskalenko waited two years to be baptized. She said she hesitated because she thought she had to become a good person before she could make the covenant with Christ. When she finally voiced the reason for her reluctance to a church member, he replied: “You want to become good without Christ? Why do you need Christ then?”

“That turned my thoughts upside-down,” she said. “I thought: ‘Good point. Why do I need Christ? I have tried to be a good person, but it doesn’t work out.’”

Moskalenko was baptized, but she was not convinced immediately about all the church’s teachings. She was determined to continue to eat pork.

Her husband followed her in baptism two years later.

Times were tough in southern Ukraine in those days in the early 1990s. Food and jobs were scarce. People were starving. The collective farm had folded after the Soviet collapse, and the Moskalenko family lived on the only farm in the area.

“When we accepted God, we didn’t know how to live,” Moskalenko said. “Our salary was not enough to live on. My husband and I thought: ‘What can we do? And how can we help people stop stealing so they can work honestly?’”

The Moskalenkos decided to give away their grain to the townspeople: a ton for one family, and a ton and a half for another, each according to its needs.

“We told them: ’We are helping because it’s difficult to make ends meet, but you have to learn how to live honestly this year,’” Moskalenko said.

The townspeople did just that. The Moskalenkos taught them how to grow their own gardens. Their home was always open. Anyone who needed clothes could take some from the closet. Food was always ready in the kitchen.

“Do you know how nice it is to come home and find a signed note reading, ‘Thank you so much. We ate here’?” Moskalenko said.

“When people saw what we were doing, their hearts were changed,” she said.

In seeking to follow God’s commandments, Moskalenko worried about her own children — and said she began to realize the power of prayer. She had two children at the time, and the number would grow to five.

She pled to God on her knees: “We are leaving everything for You. How will I feed the children?”

She said she immediately sensed God reply: “Serve Me. As for your children, I will take care of them. I will think about your children.”

“He has never let me down,” said Moskalenko, who now has two grandchildren and is expecting a third.

The Secret for Growth

She and her husband started work on a first Adventist church in the town in 1994. By the time it was completed, it could not contain all those who wished to worship there. So they built the new church, which was dedicated in July. Moskalenko has always been the local church leader.

“It just happened,” Moskalenko said. “I don’t know how it happened.”

Asked for the secret of the church’s impressive growth, she emphasized that it rested on prayer and the total involvement of church members in the community.

“It’s the law,” Moskalenko said, signaling the importance that she placed on the gatherings.

Other townspeople also join them at the church to pray.

Church membership would be larger, but people have left the economically strapped town for better jobs elsewhere over the years.

On the street, it’s not unusual to see Moskalenko telling someone, “Why weren’t you at church?” or “We are praying for you.”

“Everyone knows that we are praying for them,” she said.

Adventists are so respected that the local public school schedules its graduation ceremony, held on Saturdays, for after sunset.

Church members are also always out in the community, helping with potato crops or in vegetable gardens; cleaning up streets; visiting war veterans, the disabled, and the sick; and congratulating people on their birthdays and giving gifts of religious literature.

“Last Sunday we had a funeral for a woman who left a husband and children. We covered the funeral and an accompanying meal at our own expense, even though that family doesn’t live here,” Moskalenko said. “The whole town sees that.”

And that, she said, is why 10 percent of the town is Adventist.