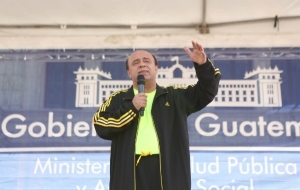 Thousands of Adventist young people
demonstrated their dedication to a healthy lifestyle as Guatemala’s Ministry of
Health officials launched a health initiative from the National Palace of
Culture Plaza late last month.

The event brought together government
leaders and health organizations to promote the Adventist Church’s “I Want to
Live Healthy” initiative, a plan that promotes eight healthy habits, such as
drinking pure water, fostering a positive attitude, consuming fruits and
vegetables, getting plenty of rest, no junk food, eating breakfast and less
dinner, and being happy.

“Thank you for sharing this
initiative,” said Jorge Villavicencio, Health Minister of Guatemala, as he
expressed appreciation to church leaders and the more than 6,300 crowding the
national plaza. “Your support and concern for the health of our country will
help us in the prevention of diseases affecting our nation. We really don’t
know how to repay you for your support.”

Villavivencio was joined by church
leaders on stage and scores of young people on the plaza, who traveled to
Inter-America’s Youth Congress, in a 30-minute exercise routine.

The launch was made at one of four
locations throughout the capital city that saw mobile clinics offering free
medical check-ups, health fitness activities, nutrition sessions, and other
health services led by the government throughout the day.

Young Adventists, who traveled
to Guatemala for the church’s territory-wide youth congress, marched through
the streets and distributed fliers about the initiative.

“The idea is for young people
to survey some 25,000 people and educate them about healthy habits and for a
follow through by the government,” said Gustavo Menendez, communication
director for the Guatemala Union.

It was perfect timing to hold the
initiative during the youth congress. The government adopted the health
initiative after being prompted by the Pan-American Health Organization to
contact the Adventist Church in Guatemala, explained Menendez.

Seeing the “I Want To Leave Healthy”
initiative come to this level of national government brings great satisfaction
said Antulio Espinoza, health director of the North Mexican Union and creator
of the initiative.

“It’s great to see that the health
message the church has had for more than 150 years is benefiting so many people
across borders,” said Espinoza. The plan has been adopted across Mexico and
plans are underway to take it to the Dominican Republic, Colombia, and several
European countries, he added.

The objective of the initiative
during the youth congress is for the youth to practice healthy habits themselves,
share with people in Guatemala the benefits a healthy life, and take part in
sharing the same health message in their churches and communities when they
return home, Espinoza explained.

Bevann Douglas, 26, a delegate from
Trinidad, was glad to see the church taking a leadership role with this health
initiative. “We have to seriously practice a healthier lifestyle, because most
of the time it’s hard to distinguish ourselves from others when it comes to our
health choices,” said Douglas. “It is important that we eat right and be fit to
prevent so many diseases.” Every third Sabbath of the month Davis and her
church offer medical check-ups in nearby communities.

For Mayrel Artiles, 21, from Puerto
Rico, it is much more than eating the right foods. “This health initiative is
about transmitting joy and happiness. I see a great need for emotional and
spiritual health. With this initiative we can share so much more of the peace
and hope we have in Jesus.”