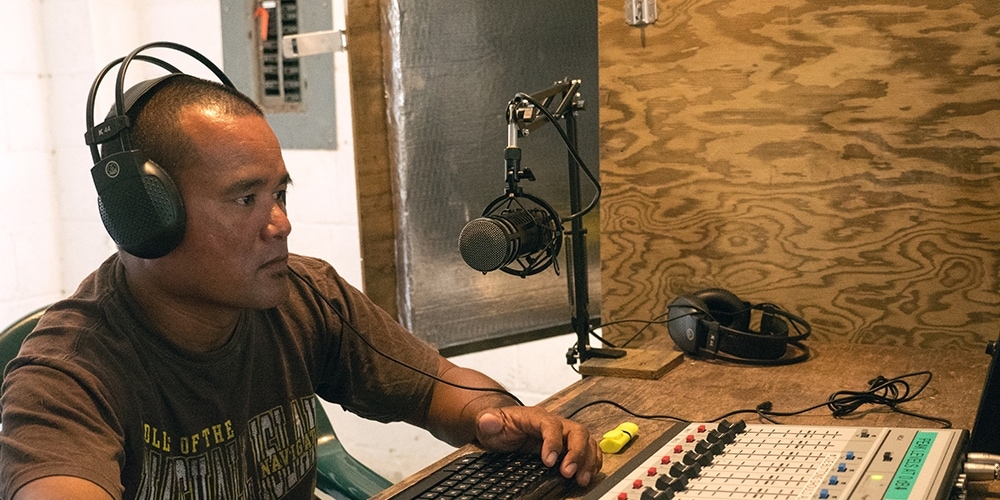 Radio audiophiles in Majuro, Marshall Islands, have a new station to listen to as of Jan. 12. That’s when Joy 90.7 FM began its first broadcast. This represents the culmination of years of planning and several weeks of installation on the campus of the Majuro Seventh-day Adventist school and church, and sister congregation and school Laura Seventh-day Adventist Church.

“We are excited to see this dream come to fruition,”

Between the two towering radio antennas, almost 28,000 residents of Majuro and visitors to this capital island city will be able to enjoy daily Adventist programming.

“We are excited to see this dream come to fruition,” said Ken Norton, Guam-Micronesia Mission (GMM) president. “Joy FM has played a major role in growing the Adventist church here on Guam and in the Northern Mariana Islands during the past 27 years. We believe the same result is going to happen on the other islands throughout Micronesia and we can’t wait to see what God is going to do through these newly established radio stations.”

Norton explained how Matt Dodd, manager for Joy FM, the GMM radio station, and current mission communication director, joined forces with Adventist World Radio (AWR), the North American Division (NAD), and church members to fulfill this need. The GMM, AWR, and the NAD have provided funding to start and operate the station.

“Local church groups have also done fundraising,” said Brook Powers, chief engineer and site manager for AWR Guam. “There is a strong desire to have an Adventist station for the island.”

Powers, who coordinated the installation and will conduct training on tower maintenance, programming, electronics, and solar panel operation, said, “We poured the concrete base about a week ago, and now we’ve finished erecting the aluminum lattice that holds the antennae. Although we aren’t quite done with everything, the [Majuro] broadcast is up and running.”

Powers explained that a smaller tower with a repeater was constructed at the Laura church and school, on the opposite side of the island. The radio signal leaves Majuro and will get picked up and retransmitted on a different frequency.

Two Majuro Bible workers who receive training from Powers will keep the local station — with its 300-watt transmitter — running. According to Darrel Riklon, Bible worker, and new station assistant manager, he and manager Elson Jinwa Maita, a Bible worker and head elder of the Majuro church, will also train others to help keep the broadcasts going 24 hours a day, seven days a week.

Joy FM has left the Majuro team with one year of programming, which includes Bible studies, music, and more. As the team managing the Majuro station gains experience, it is hoped they will be able to tailor the programming to specific needs, adding interviews, children’s Bible stories, music, translated material, and more to the mix in Marshallese and other languages.

Maita and Riklon are looking forward to adding “local” programming as soon as possible. “Time will be split for various people groups — those primarily from Majuro, Fiji, and the Philippines,” said Riklon. “This station is for the people of the Marshall Islands.”

“All the programs we’ve been playing already are very interesting. … It’s important to have a station because it is another way to reach out to people,” said Riklon. “Sometimes we can reach people by going house to house, but with the radio station, we can reach them when they turn on the radio inside their houses and in their cars. Every day, everywhere they go, they can listen.”

“We need to spread the message to the world,” Riklon added. “Jesus told us in Matt. 28:19 to preach the gospel to all the world and that’s what we need to do. … Most of the time the listener, the resident, doesn’t really understand the truth about Jesus and the Bible.”

“We need to spread the message to the world,”

According to Riklon, the goal is to start sharing Adventist, Bible-based content in Marshallese as soon as possible, in anticipation of a special dedication service to be held at the church in the coming weeks.

Majuro isn’t the first radio station in the GMM: the first station was installed by AWR in Guam in 1990. AWR passed operation of this station, known as KSDA 91.9 FM, on to the GMM in the early 1990s. Saipan transmits the Guam broadcast, while the Ebeye transmitter was completed on Tuesday, Jan. 16. Construction in Kosrae will be finished in just a few days. Three more stations are planned for Yap, Chuuk, Pohnpei, and Palau. More than 380,000 potential listeners live on these islands.