Growing a Legacy in India 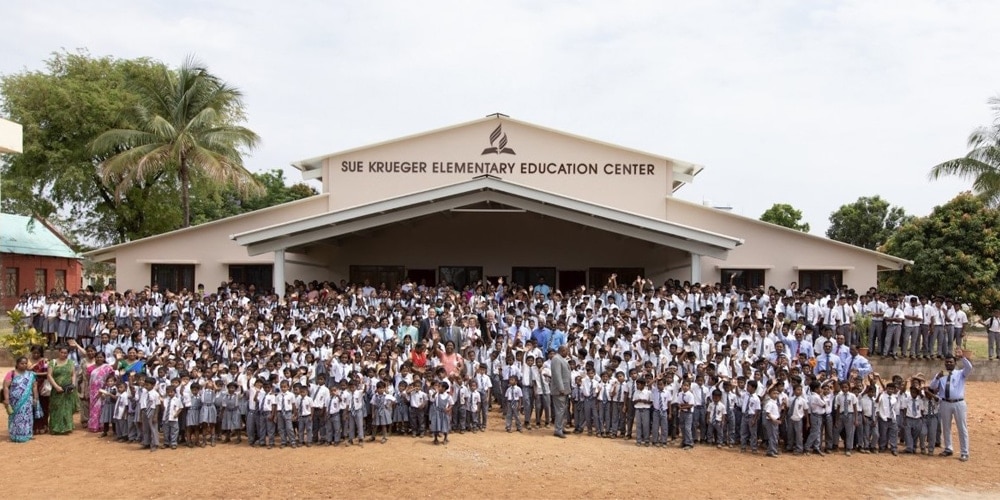 In the northeast of India lies one of the very first Seventh-day Adventist schools ever opened in the country. Located in the state of Jharkhand (meaning “bushland”), the Khunti Adventist School has a quiet, rural setting but a booming enrollment. More than 1,300 students attend the school, which opened in 1937.

The campus started with humble beginnings. The Adventist families in the community constructed a mud-hut classroom with a thatched roof and hand-dug a water well. Since then, the school has grown from a single building to today’s sprawling 37-acre (15-hectare) campus, with classrooms for elementary and high school students, dormitories, a cafeteria, and staff housing.

Although it is a Christian school in a majority Hindu region, the Khunti school has come to be regarded with distinction. The people around it live in villages and lead simple lives, earning wages through a trade like tailoring or pottery-making. As one of the only English-speaking schools in the area, families are eager for their children to attend Khunti, where among other topics they also learn about Jesus and the Bible.

“Christians have a special place in the society,” says V. P. Singh, president of the Adventist Church in northern India. “Although some people do not like to become Christians for various reasons, they know Christians are good people, and the education that they get in Christian schools is good. In fact, those who oppose Christianity or conversion, they themselves want to [be] educated in our schools.”

Because of the demand, the Khunti school could increase its enrollment, but it simply doesn’t have the space. Each year the school turns hundreds of families away. Classrooms are crowded, elementary grade classrooms are scattered throughout campus, and there is no space large enough for the entire school to assemble. Deteriorating buildings are also a deterrent for prospective and existing families. With the campus being more than 80 years old, many structures have leaky roofs, crumbling walls, and broken windows.

“When parents come to the school, they actually look for the infrastructure,” said former principal Ramesh Fendall. “Good classrooms. And that we do not have. Once they see the classroom and the facilities, for elementary especially, they go back. They don’t come. They take applications but never come back with the applications. Many of the parents also give suggestions that we update ourselves, make good infrastructure for the children to have good education.”

Suleman Topmo is one of the school’s teachers. He has spent much of his life at the Khunti school; growing up, his parents worked on the farm operated by the school. “We don’t have proper classrooms,” Topmo said. “They aren’t well equipped and are very old. They are the same classrooms I studied in when I was a student! Students are increasing, but classrooms are getting crowded. We are really facing a problem to get more students.”

In 2018, Maranatha Volunteers International agreed to construct a 12-classroom school building on the campus of the Khunti school. The new structure could house elementary grades, provide a space for assemblies during the week, and host church on Saturday (Sabbath).

In April 2018, Maranatha broke ground on the project, and over the past year, 115 volunteers helped construct the new building.

“Compared to many of the structures we construct around the world, the scale of this building is different because it’s simply much larger,” said Kyle Fiess, Maranatha’s vice president of projects. “At more than thirteen thousand square feet, it is a large steel structure with long spans, so it can take more time to complete. Yet, as large as it is, it is simple enough that volunteers can still help build it.”

On May 2, 2019, a special dedication was held with more than 1,000 people in attendance. Maranatha president Don Noble was present to participate in a ribbon-cutting ceremony.

“This building is much more than a structure,” Noble said. “Future Seventh-day Adventist Church leaders come through this school, and it provides a less-fortunate area with opportunities they wouldn't otherwise have.”

The building was made possible, in part, by a generous gift from the Krueger family in memory of Sue Krueger. Krueger, a long-time volunteer and supporter of Maranatha, had a passion for education and a special affinity for India, and the building is named in her honor.

After the ceremony, students and teachers explored their new classrooms. These large, clean classrooms are a far cry from the old, deteriorating buildings. Students and teachers’ smiles showed their approval. And when enrollment opens in January 2020, there should be even more smiles.

“One of the parents at the dedication told me his daughter didn’t want to go to school at Khunti anymore because of the conditions, so they pulled her out,” Noble said. “Then they saw the construction going on, and with this new building, she’ll be returning to the school next year.”

The excitement or the new school building extends beyond the Khunti campus. Families are taking notice, and children who have never heard of Jesus may soon be attending the school. One of the first Adventist schools in India that started with a mud hut now has a substantial building to be a beacon for the gospel for years to come.

New principal Patmas Murmu knows this building will make a big difference in sustaining Adventist education into the future.

“On behalf of the school I would like to thank the donors for helping the students in getting their Christian education and hope someday these children in return will come out good and serve the community at large in their surroundings,” Murmu said.

The original version of this story appeared in Maranatha Volunteers International’s Spring 2019 issue of The Volunteer magazine.