Good News That There Is a God? It Depends 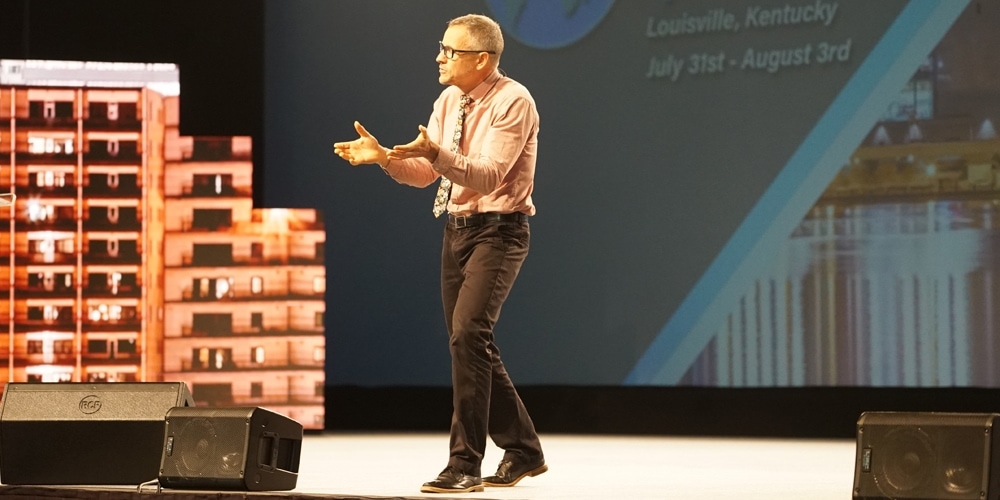 “Is there good news that there is a God?” pastor and international speaker David Asscherick asked the thousands of Seventh-day Adventists gathered at the Kentucky International Convention Center on August 3, 2019.

Asscherick, the guest speaker for the Sabbath worship service at the 2019 Adventist-laymen's Services and Industries (ASi) International Convention in Louisville, Kentucky, United States, said that of course, it all depends on what kind of god, husband, or neighbor we are talking about.

“Every god except one is absolutely not good news,” he said.

Asscherick based his message, “An Unusual God,” on what he said are the two key points in the gospel, namely that, one, there is a God, and, two, God looks like Jesus. Speaking on Paul’s epistle to the Romans, Asscherick said, “In it [the gospel of Jesus] the righteousness of God is revealed” (Romans 1:17). Quoting Christian philosopher Alvin Plantinga, he added, “This display of overwhelming love [Jesus’ sacrifice] is not the greatest story ever told but the greatest story that could ever be told.”

Jesus, the Only Solution

Asscherick reminded the audience that in his letter to the Romans, Paul makes clear that the whole world “is guilty before God” (v. 19) and that “there is none righteous, no, not one” (v. 10). It means that all of us are condemned, he said.

“The good news,” Asscherick explained, “is encapsulated in the phrase ‘but now’” (v. 21). He quoted, “But now the righteousness of God apart from the law is revealed … through faith in Jesus Christ” (vv. 21, 22). “According to the Bible, the location of my and your redemption is in Jesus Christ,” Asscherick emphasized. “If we are going to have redemption and salvation, it has to be outside of us—in Jesus Christ.”

It was a salvation achieved, he said, through the faithfulness of His bloody death.

Turning to Jesus’ experience before His crucifixion, Asscherick said that Pilate tried to show Jesus he was in charge. When Jesus did not answer his questions, Pilate asked Him, “Are You not speaking to me? Do You not know that I have power to crucify You, and power to release You?” Jesus told Pilate, “‘You could have no power at all against Me unless it had been given you from above’” (John 19:10, 11).

“The cross,” Asscherick said, “was about control, humiliation, about keeping people in line. But Jesus makes it clear that no one can take His life unless He voluntarily surrenders it.”

Jesus’ attitude, Asscherick said, is entirely different from any other god.

“Something about this tells us that this is an unusual God,” he said. Quoting theologian Larry Welborn, he read, “Christ shared the fate of a piece of human garbage.” Then Asscherick asked, “What is this God doing by going voluntarily to His death?” before answering, “He is being Himself!”

Jesus’ unusual sacrifice should be before us in everything we say or do, Asscherick emphasized.

In light of that reality, Asscherick said, “the God that we have to preach, to make famous in the world, is not an ordinary God. He is not an honorary God but an extraordinary God, an unusual God.