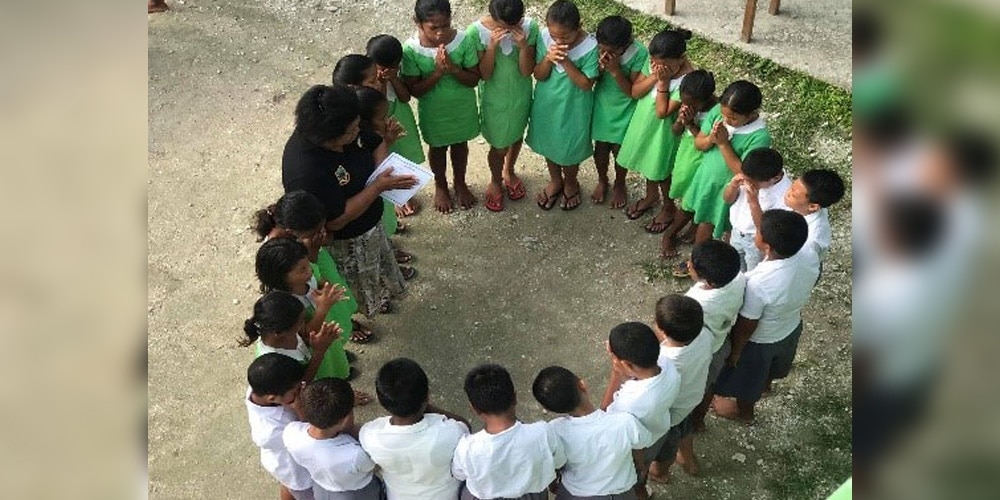 “Looking Beyond” was the week’s theme, with hundreds of students, teachers, and members of the wider community participating in the programs.

An evangelism series at Navesau Adventist High School in Fiji culminated in the baptism of 40 students on August 15, 2020.

At Funafuti Adventist Primary School in Tuvalu, activities were held over two weeks. The first week was designed for the teachers’ enrichment, while the second week saw teachers lead out in evening presentations and students involved in singing for the community. Principal Kima Pedro said the church was packed every night, and a good number of non-Adventist parents faithfully attended. Students also visited retired teachers and presented them with gifts.

Betikama Adventist College in the Solomon Islands concluded their Adventist Education Week with the baptism of 19 young people on August 22. Principal Partinson Bekala said the week’s scriptural readings helped to strengthen the students’ stand for baptism. There have been 69 baptisms at the college this year.

Samoa Adventist College held a combined Adventist Education Sabbath on August 23. More than 200 parents joined in the celebration, with the majority being from other faiths. Principal Tepora Fuimoano said that there were a lot of positive comments from parents.

In Fiji, a teacher from Suva Adventist College, who organized the Education Week of Prayer in her local church, said, “I have never felt so blessed, inspired, and impressed in my whole Christian life. Please pass on our sincere appreciation to the principal, Encie Donie, and her team at BekaBeka Adventist High School for the readings. They were truly an inspiration.”

Beulah College conducted its Adventist Education Sabbath throughout all the local churches in Tonga on August 30. With teachers and students sharing the Word of God, they collected more than they had budgeted for a special offering toward the school’s operation. Mission Education director Fatongia Hopoate said, “The school … received more. God works in a mysterious way during this pandemic — to God be the glory!”

Hopoate said the amount of money collected shows the tremendous support church members have for Adventist education in Tonga. Two weeks earlier, 24 students and two teachers were baptized. More than 60 percent of students at Beulah College are from homes of other faiths.

In the Solomon Islands on August 18, Naha Adventist Primary School staff and students visited Sunrise Adventist Primary School. Sunrise school is located in the center of a community from another faith and is also surrounded by churches from other Christian denominations. Nearly all the children attending Sunrise school are from families of other faiths who mostly live near the school.

Students were encouraged to witness in their local community, and one of the residents they met was an elderly man named Iro. While the students were singing songs about God’s love, tears streamed down his cheeks. He listened as the students prayed, recited memory verses, read Bible promises, and shared a little thought on God’s love based on John 15:13. Iro mentioned that the students were the first group to visit him and give him gifts. He requested prayer so that he can join the little group worshipping every Sabbath at the school.