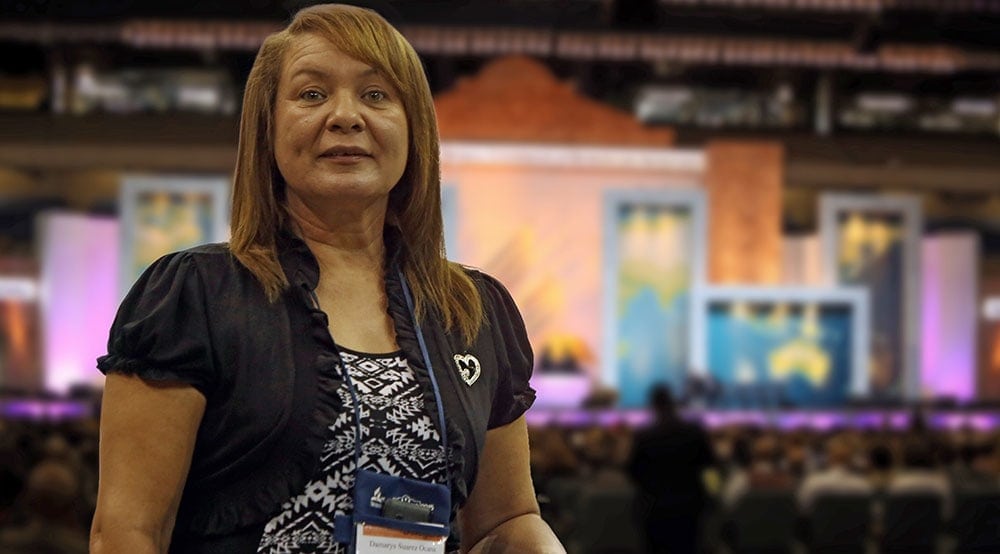 Waylon Johnson sits in quiet awe inside the Alamodome as he witnesses the way the church leadership makes decisions to further the work of the church around the world.

Johnson won a free trip to the 60th General Conference session in San Antonio, Texas, after winning a Bible Bowl competition in his church in Freeport, Bahamas.

“To feel and hear the diversity around me and see church leaders respect differences of opinion and conduct themselves prayerfully in every decision taken makes me feel part of a really big worldwide movement,” said Johnson, a young adult delegate for the Inter-American Division.

Johnson, 30, takes in every word spoken, every note played, and every song performed and thanks God for allowing him to be part of such an inspirational experience.

Johnson began his journey to San Antonio in 2011 when he competed against hundreds of young people in Bible competitions at his church. Competitions at the conference, union, and division levels followed. He became the winner of the Inter-American Division’s Bible Bowl competition that year and won a one-year scholarship to Antillean Adventist University in Puerto Rico. He will start his third year of theology at the university this year.

Just two months ago, Johnson competed against the three top Bible Bowl winners and grabbed the 2010-2015 Inter-American Super Bible Boom title, securing a spot as an official delegate at the session.

After listening to General Conference president Ted N. C. Wilson speak on the challenge of reaching others in the mission field, Johnson wants to become a missionary when he graduates.

“Seeing how the church is united on missions and on the Second Coming, even when we are from different parts of the world, makes me so proud to be a Seventh-day Adventist,” Johnson said. “This is an experience I will never forget.”

Damarys Suarez of Cuba is savoring every moment during her first visit to a GC session.

“It’s an indescribable feeling to see so much take place here,” said Suarez, 48.

Suarez, one of the first delegates to attend the GC session from the Caribbean island, takes notes of every message. She plans to share what she learns with the church to which she ministers back home in the Bolivia district in the Ciego de Avila Province, some 261 miles (420 kilometers) east of Havana.

Suarez candidly says she is not a pastor nor a Bible worker and only completed sixth grade. But she has given her heart to Jesus and has served Him ever since. Eighteen years ago, a church was organized in her home. Today 92 members meet there every week, and a new group has been formed from that church.

In the Alamodome, Suarez is moved to tears as she hears devotionals, presentations, special music, and spiritual messages, and expresses her “Amens” and “Hallelujahs” from her seat.

“God has granted me such a gift in being here,” she said. “Seeing so many cultures represented and praising God from the heart in their own language chokes me up.”

After having to deal with many obstacles and challenges in her country, she says it’s a breath of fresh air to see how well things are coordinated at a GC session and how quickly the lines move in the cafeteria.

“The process in which the church conducts its business and everything else impresses me immensely,” she said. “Everything is so well organized. It’s definitely a great lesson to take.”

Suarez has told her friends back home that she’s seen thousands of Adventists walking next to each other all over the city, like busy little ants going everywhere.

“I can just image how it will be in heaven,” she said.

For George W. Brown, Inter-American Division president from 1980 to 1993, seeing the church in its global setting today is just as inspiring as when he first stepped into the 50th GC session held in 1966 in Detroit, Michigan.

Particularly satisfying is seeing the church reaffirm its stand on mission, said Brown, 91, who is attending his 11th GC session. Hearing the leadership speak about a shift toward new evangelism methods is precisely what he hoped to see the church focus on.

“I’m expecting decisions to intensify the global thrust of the church in finishing the work,” the delegate said. “We need new strategies for reaching the world with a fresh momentum.”

He wants the church to be injected with a passion for evangelism, much like the kind he saw back in 1966 during the presidency of Robert H. Pierson.

“‘From Everywhere to Everywhere’ was the phrase coined at the session in which missionaries were sent not only from North America but from all around the world to the mission field,” Brown said.

Brown, who was elected to but declined the position of General Conference president during the 1990 GC session, says he is happy to see the diversity of the leadership in the church today.

“This inclusiveness of the various ethnic groups and cultures around the world has really unified the church,” he said.