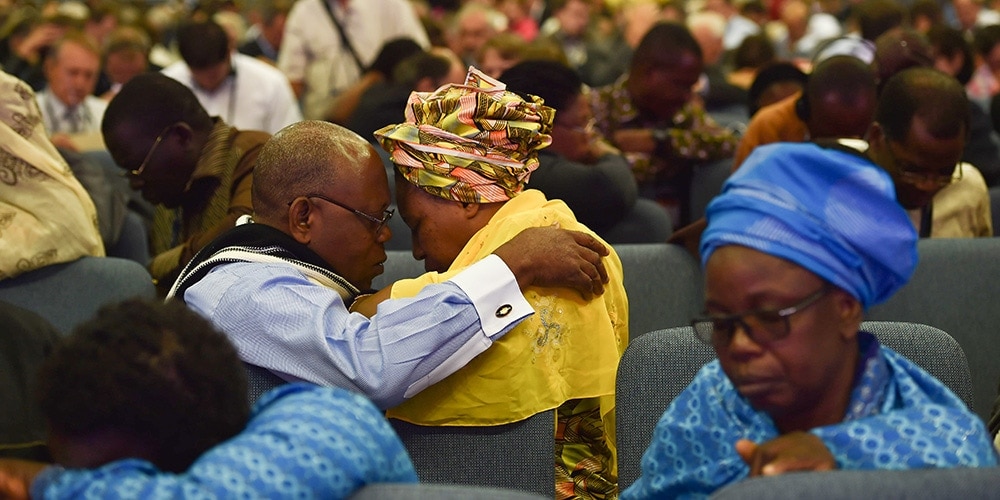 Delegates at the General Conference session knelt down with the Adventist Church’s top officers as they promised to show “Christ-likeness and humble respect for each other in our words and actions” during the 10 days of the meetings in San Antonio, Texas, and beyond.

“The most important thing that we must carry from this General Conference session when we leave . . . is that we are united in mission,” Wilson said. “Today we will make an appeal to you along with all of us: Humble your hearts before the Lord.”

The full text of the appeal reads:

“We, General Conference and division officers, appeal to all 2015 General Conference session delegates and attendees to accept each other as brothers and sisters in Christ regardless of some differences of opinion that may be evident on certain subjects. We ask for Christ-likeness and humble respect for each other in our words and activities during the General Conference session and beyond. Our humble demeanor and attitudes, through God’s power, will speak volumes to those who are watching. We earnestly appeal that we do all in our power to strengthen the church—this precious Advent movement. We lean completely on Christ for the unifying spirit that we need in proclaiming the three angels’ messages in these last days of Earth’s history.”

At Wilson’s request, the some 2,000 delegates stood to acknowledge that they accepted the appeal. They then divided in groups of two or three to seal their commitment in prayer. The 60 church officers knelt on stage, and the delegates knelt on the main floor of the Alamodome stadium, the site of the General Conference session.

General Conference leadership has made a special effort to encourage humility and a Christlike attitude at key business meetings in the run-up to the General Conference session, where delegates will vote on much-discussed issues such as wording revisions to the church’s fundamental beliefs and women’s ordination.

Wilson prefaced his reading of the statement with a screening of What Might Have Been, a short film produced by the General Conference Ministerial Association about the General Conference session in 1901. The film, based on a vision that church cofounder Ellen G. White had, portrays how God had planned to carry out a deep spiritual renewal as delegates were reconciled through humility and the confession of sins at the 1901 session.

“One hundred fourteen years, and we are still here on Earth,” Armando Miranda, a general vice president of the General Conference, told delegates Thursday.

Wilson urged delegates to “press together as God has instructed us” and “to put away every contention.”

“This General Conference session could be our last if we act according to God’s will,” he said.

He noted that Adventists around the world have been praying for the 2015 General Conference session and for the delegates as part of 100 Days of Prayer, a Ministerial Association initiative that ends at this session.

“For the past 100 days, God’s people around the world have been praying for you [and] for me,” he said. “Let’s not disappoint them, or God, or the angels who are in our midst today. What might have been, can be.”

Wilson added: “I earnestly ask that the Holy Spirit will be in our midst this morning, this afternoon, tonight, and throughout the session as we look forward to the Lord’s soon return. We want to go home!”