From Broadcast to Baptism 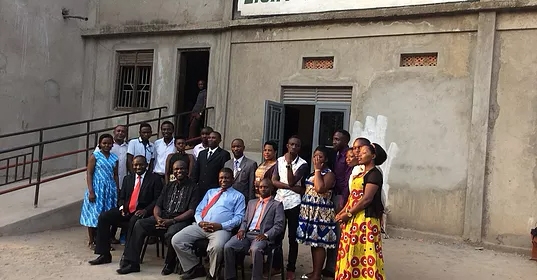 Adventist World Radio is committed to continuing its support of radio projects and setting up new projects in unentered parts of the African nation of Uganda, said church leaders in the region. The radio ministry of the Seventh-day Adventist Church is working specifically in the northern part of the country, an area where membership was scarce for years.

“Continue doing what you are doing [because] you are truly the lifeblood of the community and a blessing to other people,” he said.

The Role of Radio in Evangelism

Church leaders shared that radio evangelism has played a significant factor in the recent membership growth in the nation. The Prime Radio station, for instance, hosted an outreach event in January 2017 at Mandela National Stadium in Uganda where 1,007 people were baptized. Radio ministry in Uganda is also said to have greatly contributed to the record-breaking baptism of almost 50,000 during the 2017 Total Member Involvement (TMI) initiatives which climaxed in July.

Managing director of Prime Radio Fred Nkayivu said the radio station is expanding its coverage and touching lives in unique ways. Allen’s visit coincided with a giveaway of a wheel chair to a new convert, who became a Seventh-day Adventist through Prime Radio. A double amputee, the new believer requested assistance to move around, and Prime Radio put his request on the air. Soon a listener donated a brand-new wheelchair.

“Here we have a prime example of how radio goes from broadcast to baptism and beyond,” said Allen after handing the wheelchair over to Sekamanya. “I am just thrilled to be here to witness and to hand over this wheelchair to this gentleman, who has given his life to Christ.”

Rwenzori Field, in Western Uganda, is where Light FM, one of AWR projects has benefited massively from Adventist radio in soul winning. Rwenzori Field President Ezekiel Mutwanga expressed his gratitude for equipment Light FM had received from AWR a few days before Allen’s visit. Mutwanga also shared that for three months before TMI campaigns began, the radio was flooded with evangelistic messages which enabled the mass baptism of at least 2,700 individuals at the Kasese Better Living Centre.

Most people getting baptized in the Rwenzori Field are crediting Light FM as their first source that contributed to their learning the Adventist message.

“As I tried tuning my radio set, I found Light FM,” said a religious scholar from another faith community baptized as a result of the radio ministry. “Its music and messages sounded authentic. For the first time, I was able to hear about the Sabbath and other unique Bible truths.”

Allen highlighted the connection between radio broadcasts and evangelism in the region.

“AWR has a new slogan, ‘From Broadcast to Baptism,’ as we integrate the radio with our evangelistic efforts,” he said. “AWR is here to partner with you; it is your initiative, but we are here to assist you in the work of spreading the gospel.”

Having covered the Southern part of the country, AWR now aspires to extend coverage to Northern Uganda which experienced 20 years of civil war ending in 2006. As a result, the work of the church in the region was hindered, and it remains a mostly unentered area, according to the Uganda Union Adventist Mission.

But things are changing. According to Executive Secretary of Northern Uganda Field Robinson Okello, there were just around 5,000 members in 2000. After private FM stations were set up in the region, the church started to buy airtime to spread the gospel message.

“Radio stations have prepared the ground, and now people are ready to know more every time an evangelistic series is planned for the area,” said Okello. “Thanks in part to the radio ministry, membership now has reached 24,000 in the North.”

Besides the vast unentered Northern Uganda region, the remaining areas “are looking forward to establishing local AWR projects,” said church leaders. “Then the entire Uganda will be covered.”