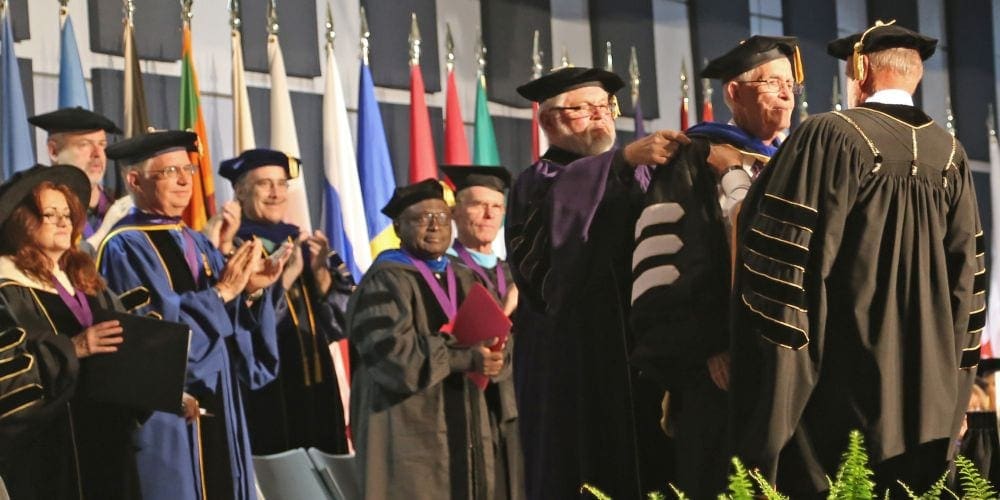 Loma Linda University has presented former Adventist Review editor William G. Johnsson with an honory doctorate in recognition of his prolific legacy of publishing and scholarship.

Johnsson, who also served as executive publisher of the Adventist Review and as the founder of its sister publication, Adventist World, has written 27 books and more than 1,000 articles. After retiring from the Adventist Review in 2006, he worked as assistant for interfaith relations for former General Conference president Jan Paulsen for two years and retired to Loma Linda, California, two years ago.

"Bill Johnsson has had a long and distinguished career as editor and scholar for the church,” said Richard H. Hart, president of Loma Linda University Health, who bestowed Johnsson with the doctorate of humane letters during the commencement ceremony for the university’s School of Religion.

“In retirement, he has taught in our School of Religion on a regular basis,” Hart said. “His knowledge and passion for world religions have been invaluable to our campus, and we are delighted to recognize him in this way.”

“The faculty of the School of Religion consider him one of the great Adventist figures of our era,” Paulien said. “His work with the Adventist Review and then interfaith relations has truly become legendary to us.”

Johnsson said that receiving the honorary doctorate was an overwhelming experience.

“The whole day was wonderful,” he said. “I’m proud of Loma Linda University Health and proud to be honored in this way.”

Johnsson continues to write books in his retirement.

“I used to dream of a time when I’d have time just to be free to write,” he said. “I’m a compulsive writer.”

He recently wrote a two-volume work on the life of Jesus called Jesus of Nazareth: His Life and Teachings, which was published last year, and has since completed a series of Sabbath School lessons on the New Testament book of Romans. Now he is writing his next book, the topic of which he is keeping to himself.

Before joining the staff of the Adventist Review in 1982, the Johnssons served in India and at Andrews University. During 15 years in India, William Johnsson first worked at Vincent Hill School as dean of boys and Bible teacher, and then at Spicer College (now Spicer University), where he became professor of New Testament studies and dean of the School of Theology.

The Johnssons relocated to Michigan in 1975, where Johnsson served at Andrews University as professor of New Testament theology and exegesis, as well as associate dean of the Seventh-day Adventist Theological Seminary on the campus.

In 1979, Johnsson was elected the first president of the Adventist Society for Religious Studies.

In 2015, Johnsson was honored with the Charles Elliot Weniger Award for Excellence, considered one of the most prestigious honors bestowed by a church entity.

Hart called Johnsson a few months ago to inform him that the honorary doctorate would be conferred on him on June 12.

“I just had not expected this at all,” Johnsson said. “When Dr. Hart called me to tell me about this, I said ‘Oh, let me sit down.’ It was just amazing.”

Johnsson also received an honorary doctorate of divinity from Andrews University in 2007.