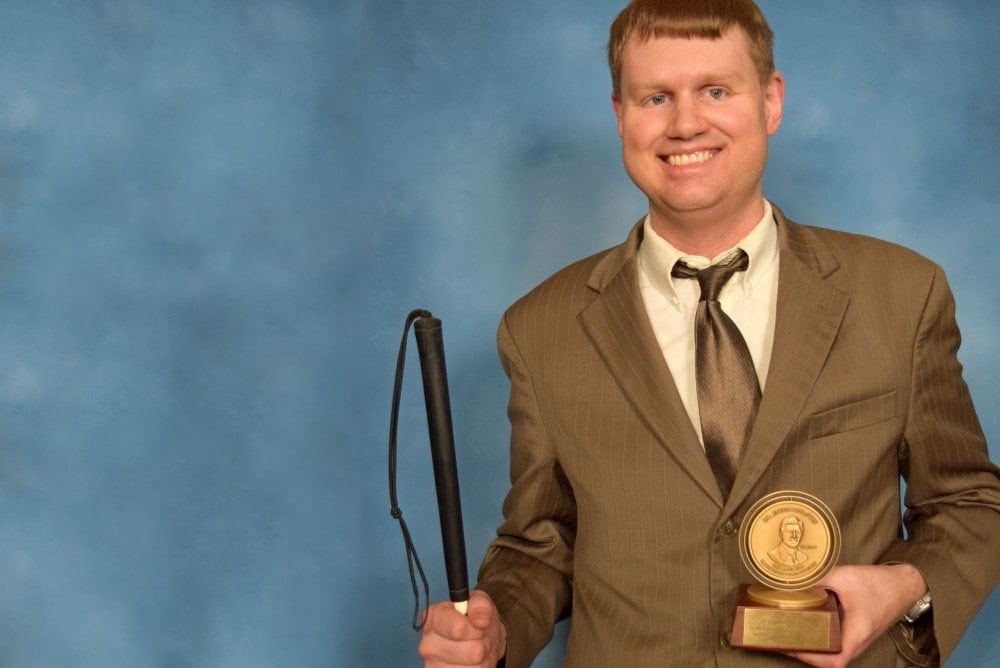 In a first, a Seventh-day Adventist believer has received the “Nobel Prize for Blindness” for coding Braille in ancient biblical languages that allow blind students to study the original texts on their own.

Ray McAllister, a blind adjunct teacher at Andrews University and a licensed massage therapist, and his organization, the Semitic Scholars, were awarded the prestigious Dr. Jacob Bolotin Award by the National Federation of the Blind in July.

The award, which came with the highest possible cash prize of $20,000, recognizes individuals and organizations that have made significant contributions toward integrating blind people into society.

“It is my prayer that this award will give me the recognition I need to negotiate with scholars around the world so I can have access to the text materials I need,” McAllister said.

The National Federation of the Blind praised the Semitic Scholars for their achievement.

“A cash prize of $20,000 went to the Semitic Scholars, a group of three blind academics who created a Braille code for ancient biblical languages so that source documents of religious texts can be studied independently by blind students in their original context — a feat that was previously impossible,” it said in a statement.

The Semitic Scholars is comprised of McAllister; Sarah Blake LaRose, a Braille transcriber and professor of Hebrew and alumna of Anderson University in Anderson, Indiana; and Matthew Yeater, president of the Michiana, Indiana, chapter of the National Federation of the Blind.

This award, known in many circles as “the Nobel Peace Prize of Blindness,” is named after Jacob Bolotin, a hard-working blind physician and strong advocate for the blind who practiced in Chicago from 1912 until his death in 1924 at the age of 36.

Being the first Adventist to receive the award is not McAllister’s first achievement. In 2010, he became the first blind person to earn a doctorate with a concentration in Old Testament, which he earned from the Seventh-day Adventist Seminary on the campus of Andrews University. He currently works as an adjunct teacher for the university’s School of Distance Education and International Partnerships in Berrien Springs, Michigan.

For the Braille project, McAllister initially used a computer to convert his own version of Greek and Hebrew symbols into Braille letters and show them on a Braille display, a device with something similar to magnetic pins that pop up in the shape of Braille words.

But he said that he realized that he needed something that would appear more like Braille Greek and Hebrew, just with extra symbols. So he developed coding for those symbols not already established in Braille.

Hebrew, for example, has accent marks that help the reader know when to pause while reading and that can be used to inform readers how to chant or sing the text. But those symbols were not previously charted in Braille Hebrew.

“Since chanting is a task a blind person can enjoy, I felt the need to prepare Hebrew Bibles in Braille with all these symbols,” McAllister said. “Once I developed these symbols, I needed to have them peer reviewed.”

In 2007, LaRose developed a Braille table for biblical Greek and Hebrew with all their technical markings. With guidance from LaRose, McAllister completed a system that could be used to prepare text for the blind. Using this system and Microsoft Word’s “search and replace” function along with the Aleppo Hebrew Bible, McAllister translated the text into Braille.

“I converted that entire Hebrew Bible, accents and all, into Braille, and, yes, I have chanted Hebrew from it fluidly,” McAllister said. “I also converted many other Hebrew documents, Semitic inscriptions, and many Greek documents into Braille.”

Through work with several other people, Duxbury now is able to convert many ancient texts without using the “search and replace” function.

“It’s definitely a lot easier relying on Duxbury to do most of the translation into Braille,” McAllister said.

Looking ahead, McAllister said he hoped to convert many more texts into Braille.

“My dreams for the future of this project are simple: I wish to have more texts in more ancient languages in Braille format,” he said. “Besides this, I have no idea how God will lead. I only know that He has led thus far, and what is to come will only be even more of an adventure.”