Expanding Care with a New Hospital 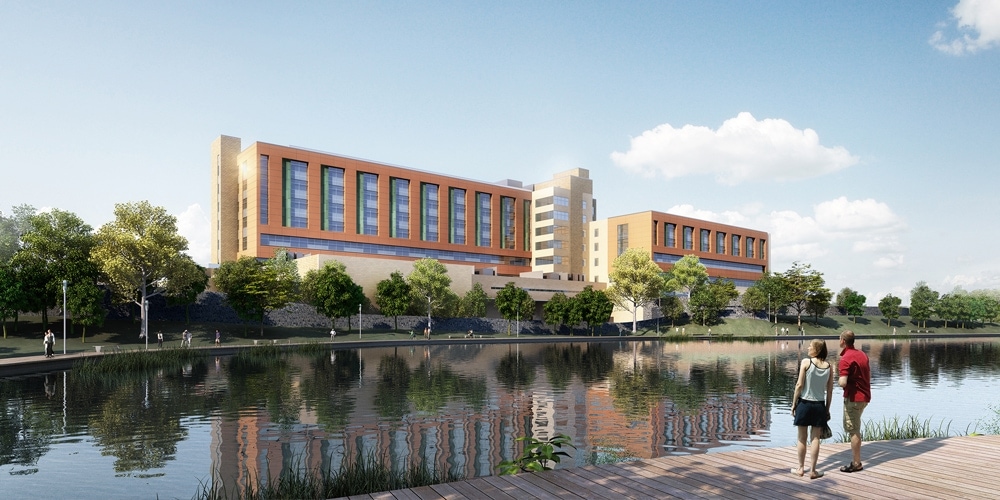 The state-of-the-art facility, scheduled to open in May 2019, is part of Adventist HealthCare’s longstanding plan to expand access to care in the region. The hospital building’s exterior will be finished by late fall, and construction will begin on a medical office building and parking garage this winter.

Washington Adventist Hospital has served the community for more than a century and will continue providing healthcare services like urgent and primary care in Takoma Park following the move of inpatient care to White Oak.

The new campus sits on 48 acres off Route 29 and Cherry Hill Road, not far from the Seventh-day Adventist world church headquarters. The hospital will be adjacent to the U.S. Food and Drug Administration, which already partners with Washington Adventist on health research, and is at the center of the emerging White Oak Science Gateway, a developing life sciences community bringing together medical researchers, businesses and retailers in eastern Montgomery County.

According to Stephen S. Fuller, PhD, director of the Center for Regional Analysis at George Mason University, the new hospital project will have a significant impact on the region. The hospital will create 7,500 jobs between construction and ongoing operations, and construction alone will contribute $845.6 million to Maryland’s economy.

The new 170-bed healthcare facility carries on the healthcare ministry that began 110 years ago with the founding of the Washington Sanitarium, a place where people came for relaxation in nature. The hospital started out with 40 beds and a staff of 12 after Ellen G. White and her husband James – Seventh-day Adventist leaders dedicated to a new, holistic approach to wellness– bought land in Takoma Park with proceeds from White’s book, “The Ministry of Healing.”

The book and several other historic items from Washington Adventist Hospital were part of an artifact box that was embedded into the new hospital’s wall this spring. The box included numerous other historical hospital documents (such as a copy of the first patient ledger), a current organization chart and a letter to future discoverers outlining the time capsule’s contents.

As Adventist HealthCare builds a hospital for the next century, it will focus on carrying forward its mission of providing whole-person healthcare in a healing environment. The new campus will feature a green roof, rooms with lake views and additions to the natural landscape such as a walking trail around the lake.

“This is a blessed time in our history,” added Wangsness. “I would like to thank our employees and physicians who are enthusiastic about our future and committed to our mission.”