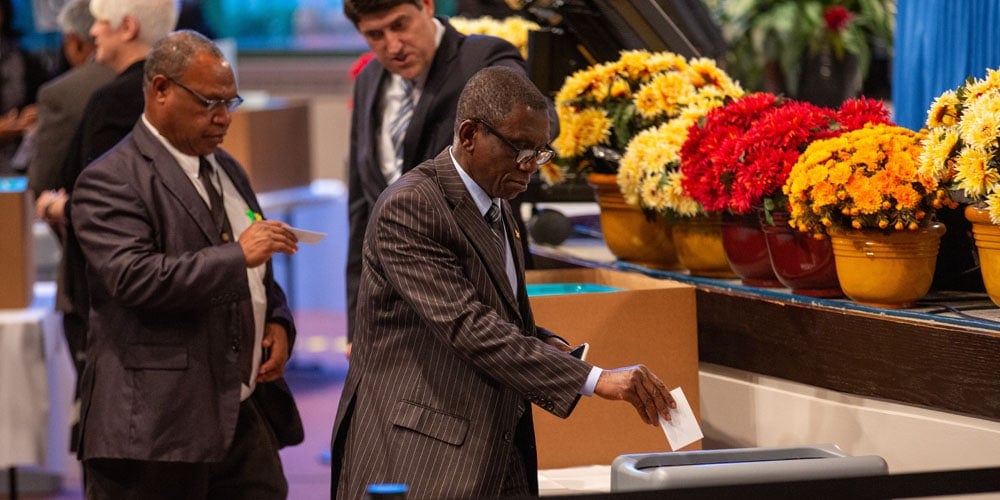 Multiple speakers underlined the contrasting importance of preserving church order while also acting with fairness toward church organizations whose constituents have voted for alternate approaches to voted positions on ordination.

Delegates voted to accept the first recommendation to provide warnings to certain unions and voted to amend the second recommendation, altering the recommendation from delivering a public reprimand of two individual members of the committee to a warning to the respective church organizations they represent.

Introduction to the Proposed Action

“This is not at all an easy situation,” said Adventist world church president Ted N. C. Wilson as he introduced the proposal. “I have personally struggled with the Lord over this situation.”

Wilson, who chaired the session, then laid out the steps taken by the General Conference (GC) since the action voted by the 2018 Annual Council that outlined a process for addressing perceived noncompliance and disciplinary measures for those deemed noncompliant. The process mainly involved giving divisions, the regional administrative bodies of the General Conference, time to assess and address perceived noncompliance within their territories. In addition, a letter was sent by the GC to the divisions in question on June 4, 2019, reminding them of the stipulations of the 2018 action and requesting they report back on the status of such organizations within their territory.

“Whether you respond favorably to the recommendation or not, at least you will know that your officers have done this in keeping faith with the 2018 voted action,” Wilson said.

The Nature of the Recommendations

Wilson next reported that “no appropriate response was provided for changes in the entities that are named within the proposed recommendations,” which led to the proposal being considered at this year’s Annual Council.

“I know of nothing in the history of our church, unless I’m missing it, where there has been direct action against a voted action by a General Conference Session on the part of entities,” Wilson offered. “And that’s why it lifts this to a fairly high profile.”

The actions taken by the four unions concern official union-level decisions to commission both male and female pastors, as opposed to ordaining males and commissioning females, among other variants.

A second recommendation concerned two other unions, whose executive committees had previously voted to approve the practice of ordaining women. The document named the Columbia Union Conference and the Pacific Union Conference, both in the North America Division (NAD), and referred to them as being “in persistent noncompliance.”

The document recommended the “presidents of the above-named entities as the individuals representing the noncompliant entity be given a ‘Public Reprimand’ as provided for in the 2018 Annual Council voted document.”

Discussion on the Floor

Discussion on the floor began with an invitation from Wilson for any of the presidents representing the unions in question to express their thoughts. While two-minute time limits for speeches were imposed by the delegates, time was extended for these leaders to four minutes each, beginning with the four presidents from Europe whose unions are to be officially warned.

“One-third of our pastors in the Swedish Union are women, and I am extremely proud of each one of them,” said Robert Sjolander, president of the Swedish Union. “They, along with the rest of us in Sweden, are not insisting on ordination.” Sjolander said his union has respected the San Antonio decision not to ordain women by choosing not to ordain either male or female pastors.

Victor Marley, Norwegian Union president, offered the perspective that his union is abiding by GC Working Policy and also Fundamental Belief 14, both of which emphasize nondiscrimination based on various factors, including gender.

North German Union president Johannes Naether added similar comments. “We treat men and women equally,” Naether said, “and for us this is a fundamental value, a human right that we think is expressed in the Bible and in Fundamental Belief 14.”

Denmark Union president Thomas Muller suggested, “We need to dig a little deeper in the toolbox and find other ways of talking, finding, solving issues.” He expressed concerns that in following this course of action “we are alienating our members from the world church.”

Speaking in favor of the motion, GC executive secretary G. T. Ng said he appreciated the presidents’ speeches because he sees that they are “trying to do their level best to be compliant with the world church.” As hard as they have tried, however, Ng said, “they are still in noncompliance.” He also reminded committee members that they are not discussing process, which was voted in 2018. “What we are doing now is to implement the process,” he said.

On that note, South Philippine Union president Roger O. Caderma reminded attendees, “It is already public knowledge that there are consequences for workers or entities that are out of compliance.”

“I was expecting some level of remorse that we have gone against what has been brought to our forum. I didn’t get that. For the lack of a better term, the open display of impunity is worrying,” said Nana Kofi Nimako, a pastoral delegate from the West-Central Africa Division. “What if a young person challenges their leadership by saying their conscience mandates them to do something wrong? What would the leadership do?”

Former Adventist world church president Jan Paulsen also reflected on the future. “Where will it take us?” he asked. “What if they [the unions] cannot make the changes that some of the leaders are asking? I cannot see this is the way God wants us to proceed.”

Others directly acknowledged the conundrum with which the Executive Committee was wrestling. “We have a decision that was made at the highest levels which needs support because we can see the trickle-out effects of having what appears to be everyone going their own way,” said Oakwood University president Leslie Pollard. “But on the other hand we have a group of colleagues pleading with the body, ‘Please let us do mission in our contexts.’” Pollard then asked rhetorically, “Which one is more urgent, compliance or mission?”

“As a global body I want to appeal to my brothers on both sides of the aisle,” said Kenaope Kenaope, president of the Botswana Union Conference. “The way I understand it, unity means that you don’t necessarily have to agree, but you do have to cooperate for the sake of unity.”

Discussion on the recommendation addressing the two NAD unions named in the document took an unexpected turn with an amendment to the motion to alter the public reprimand of the two union presidents to the same warning given to the unions from the Trans-European and Inter-European divisions.

Dave Weigley, president of the Columbia Union and one of the leaders recommended for public reprimand, said he would “appreciate the amendment” because it would give him a chance to come back to the Annual Council or ADCOM to “try to explain the ‘why’ behind [the Columbia Union’s action].”

Wilson reminded Weigley, “We’ve been at this for seven years,” and added, “We work through a representative system, and the division is supposed to work with you, and we’ve asked them to do that.”

The Results of the Vote

As stated in the document outlining the recommendations, the result of this vote now provides the warned organizations an opportunity to come into compliance with voted actions and policies before any further disciplinary steps are taken.

The document released to the delegates, which also contained the original disciplinary recommendations, stated that “each of the named noncompliant entities have the opportunity to appeal this action through processes already provided for in the 2018 Annual Council document and General Conference Working Policy.”