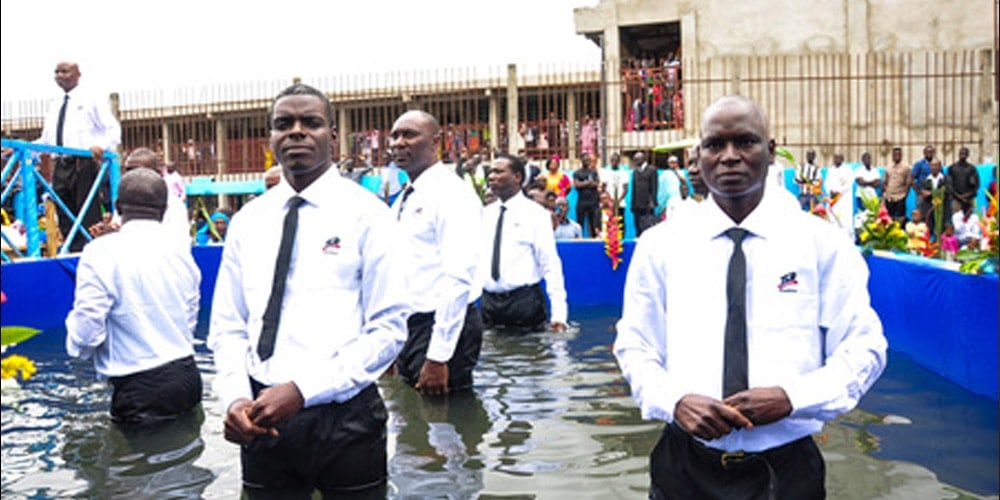 An evangelistic drive held on hundreds of sites in the Central-South Cameroon Conference (CSCC) ended with a baptismal ceremony on the Yaoundé Adventist College campus on Saturday (Sabbath), August 10, 2019. More than 3,000 people came from the city and surrounding areas for the massive event, organizers reported.

According to church leaders, it was not an ordinary Sabbath celebration. Traffic in the Bata Nlongkak area was disrupted. The national police and gendarmerie had to create security measures because of the mobilization.

“What is happening on the Adventist campus?” someone heard one passerby asking. They would soon find out, as banners and roll-ups displayed the event information. Tents and chairs, giant LED screens, loudspeakers, and other preparations were ready to welcome thousands of church members and the first 265 baptized new members among almost 800 from different sites. Media outlets were also there.

The head of street children, Alain Tchuente, showed he was deeply touched by the activities of the day. “There is still hope for us, and all thanks to men of God like you, who motivate us to believe that nothing is yet lost.” Adventist Church in Cameroon president Valère Assembe prayed for the people and for peace and unity across the nation.

A second highlight was the baptismal ceremony. With radiant faces, about 40 pastors dressed in white Total Member Involvement (TMI) shirts and black ties descended into the movable baptisteries. They baptized 265 people there, including 10 persons who followed the messages through the “It Is Written” radio broadcast. In the midst of shouts of rejoicing, Jean Pourrat Meting, director of evangelism in Cameroon, said with a wide smile, “We bless God for this great achievement.” His colleague in the CSCC, Rene Blaise Mbop Ackok, added: “We thank God for the involvement of the members and their sacrifices.”

WAD president Elie Weick-Dido was not able to reach Yaoundé in time for the service because of a one-day flight delay; Same preached the sermon that afternoon. Same delivered a message of comfort and victory for the newly baptized and for the host of worshipers who stayed to the end of the program. “You have said ‘Yes’ to Jesus,” he reminded them. “Do not leave to go back to Satan!”

At the end of the celebration, the newly baptized shared a meal with the community. The CSCC, which hosted this major drive, will continue the monitoring and prepare for an upcoming mobilization in February 2020. “The seed of hope has been planted. It must now be watered,” church leaders said.

The original version of this story was posted on the West-Central African Division news site.