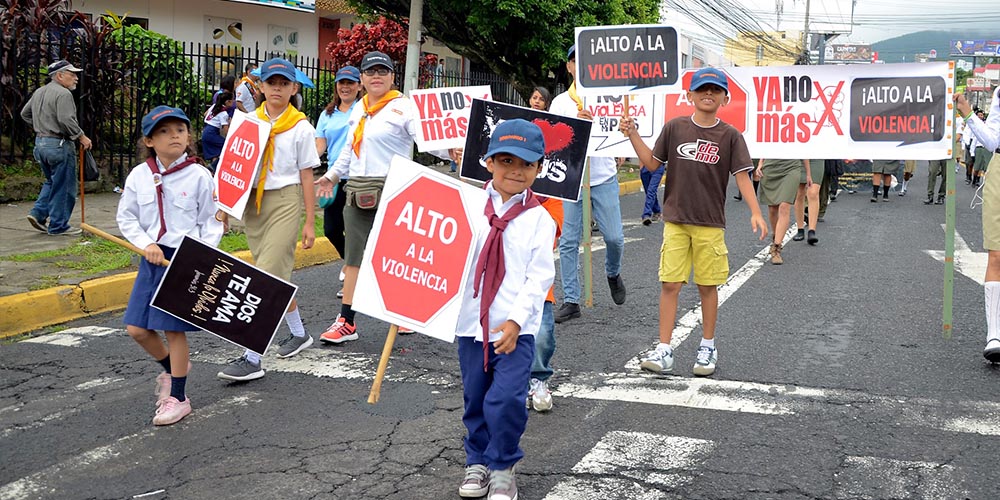 Hundreds of students from across the Seventh-day Adventist Schools in El Salvador took part in a massive march in the capital city of San Salvador last month. The march, held every year by the church, spotlighted spiritual values.

Church members and students held signs and banners and encouraged onlookers to end any violence, whether verbal or physical, and combat evil with the love that Jesus teaches in the Bible. Many more distributed literature and evangelistic books. The march ended at Plaza Las Americas, known as the Monument to the Savior of the World, for a music festival performance.

Many years ago, the annual event was a competition among the bands between the different municipal departments in the country, said Aguillón. It was later changed to a band festival to eliminate any competitive spirit and promote unity in the Adventist Educational System.

“Today we have made a step forward in sharing the gospel of Christ and encouraged others to uphold values among citizens of the country,” said Pastor Abel Pacheco, president of the church in El Salvador. “We need to hold respect, love, faithfulness, honesty and other values high in our society.”

Frederico Anliker, a representative of the San Salvador mayor’s office, congratulated the church for its positive contribution to the country. “I challenge you to continue organizing more such activities to keep society from customs that degrade and damage the coexistence of Salvadorans,” said Anliker.

Students from the marching bands among the 23 participating schools took the afternoon to perform musical numbers.

“One of our main objectives with this band festival is to exalt Jesus and spiritual values as a foundation of our Adventist Education,” said Secia de Aguillón, education director for the church in El Salvador. “At the same time, we wanted to highlight our schools,”

The annual activity has become a full-day event which also allows students the opportunity to spread positive messages of peace, health, and love for God, as well as showcase team skills through gymnastic performances and more, added Aguillón.

“Many parents accompany their children to take part in the event which turns into a spiritual feast where we honor and glorify God for how He’s kept us through the year,” Aguillón said.

For Sergio Garcia and a group 15 fellow students from the Playas Negras Adventist School, located in a rural community in the Conchagua municipal district in the eastern part of the country, the anticipation of the day kept them awake the night before. They left their homes at 2:00 a.m. to travel 450 kilometers through rough and curvy roads to be part of the day’s march and band festival.

“It’s like a dream come true for this group of students,” said Oliver López, communication director of the east El Salvador Conference. For students, teachers, and parents, this represents an opportunity to be part of the band festival year after year, he added. “This represents an investment because many parents need to make extra sacrifices to buy musical instruments and pay music teachers so that their children can take part.”