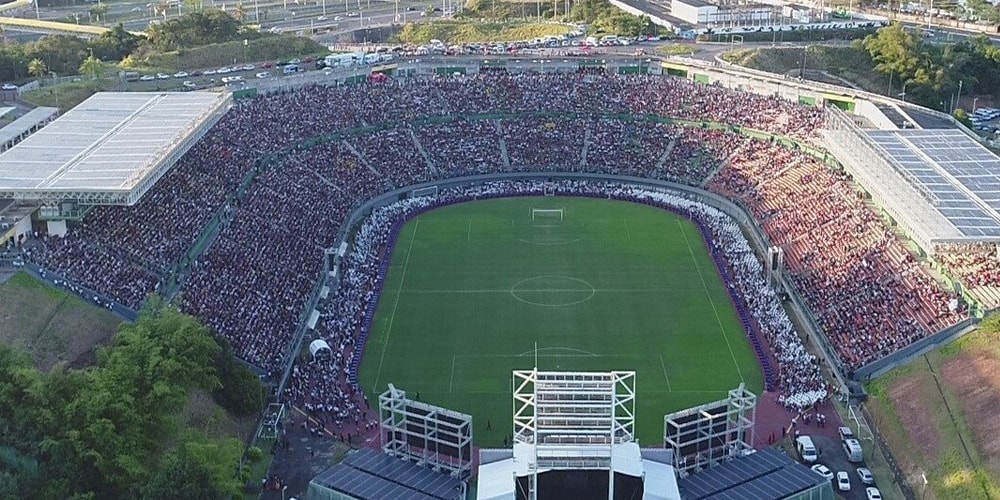 More than 30,000 Seventh-day Adventist members gathered in the city of Salvador, Brazil, to celebrate the construction of 1,000 new church buildings in a period of five years. The event of praise and thanksgiving took place at the Roberto Santos Stadium on September 29, 2018.

Most participants arrived at the Roberto Santos Stadium in convoys from several cities of the northeastern Brazilian states of Bahia and Sergipe, to take part in the “Time to Celebrate” event. The meeting commemorated the successful conclusion of the Sanctuaries of Hope project, which led church leaders and members to build the 1,000 churches in five years.

American singer Wintley Phipps also performed songs from a repertoire focused on giving praise to God and encouraging hearers to develop a relationship with Him. Phipps’s performance was well received by the audience and many watching online.

Novo Tempo TV presenter Ivan Saraiva led in a moment of worship and thanksgiving. “Let’s celebrate the importance of religious freedom [which allows us] to share such a public display of gratitude,” he said.

One of the highlights of the program was the celebration of the wrapping-up of the Sanctuaries of Hope project. Geovani Queiroz, leader of the Adventist Church in Bahia and Sergipe, walked on the stage together with the regional conference presidents. Each of them was there on behalf of residents from the various peoples making up the churches in their territory: church members from Native tribes, Roma people, farmers, and fishermen.

“This initiative allowed the church to better reach out to communities and rural territories,” Queiroz said. “It is something that would be difficult without new places of worship.”

A fireworks show crowned the celebratory event and a moment of fellowship that participants were invited to share and embrace as a symbol of togetherness in mission.

The celebration included a baptism of about 800 people. With 200 water tanks set up around the lawn, the ceremony, led by Novo Tempo TV evangelist and presenter Luís Gonçalves, marked the efforts of the Sprint Baptism drive. This initiative focuses on the commitment of young people to Jesus during September each year, which in the southern hemisphere marks the beginning of spring. Members of dozens of Pathfinder clubs and youth communities were among the baptized.

“This highlights the importance of investing and mobilizing the new generations of the church,” leaders said. “We must move them to lead our spiritual and missionary initiatives.”

“We need to invest in the new generations,” Queiroz said. “We need to put our best money into training future leaders and caring for them.”

Queiroz emphasized that the key is counting on the new generations when doing church. “[We must] involve teenagers and young adults in the life of the church,” he said.