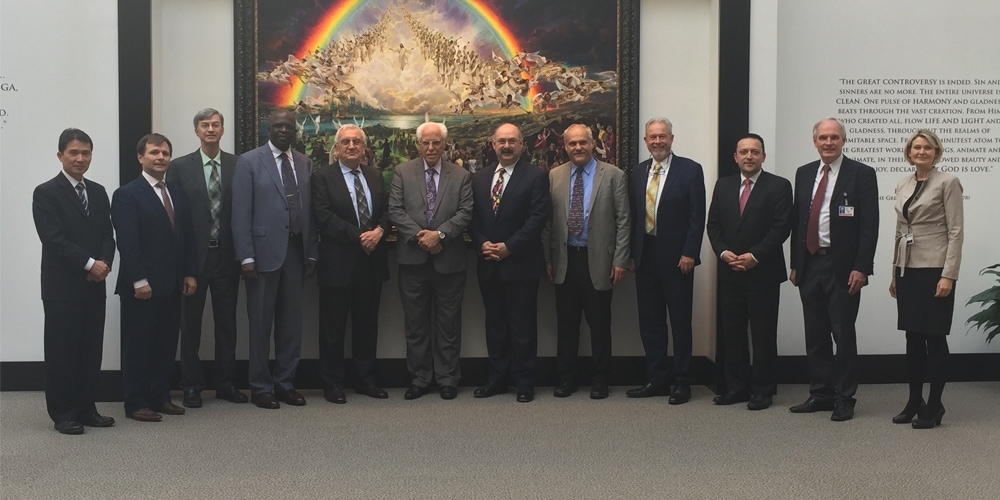 A spirit of friendship and mutual respect marked a two-day meeting between representatives of the Seventh-day Adventist Church and the Seventh Day Adventist Reform Movement. A small group of leaders and theologians from the two communions — which share a similar heritage as well as a number of key beliefs — met December 5 and 6, 2018, at the headquarters of the General Conference of Seventh-day Adventists in Silver Spring, Maryland, United States.

The goal, according to participants, was simply to establish a cordial relationship and to foster a better understanding of each other’s beliefs, mission, and identity.

“Our conversation was friendly and informative, and it acknowledged both our shared heritage, as well as a number of clear theological differences between our two communions,” said Nikolaus Satelmajer, one of the key organizers of the dialogue from the Seventh-day Adventist side.

The history of the two groups, however, began to diverge in Europe during World War I — initially over the question of involvement of church members in military service — and since that time the two denominations have developed independently.

During the conversation, participants from both communions presented papers on four areas of theology and practice. The areas as selected by the Reform representatives were: Christian temperance emphasizing the diet for the last generation; the relationship between church and state especially as it relates to participation in military service; justification by faith; and issues surrounding divorce and remarriage.

Adventist Church Public Affairs and Religious Liberty director Ganoune Diop said inter-faith talks such as these serve a vital purpose. “When we sit down together, face-to-face, we can share our beliefs and identity in our own words, and work to dispel misconceptions or prejudices. Although there may be well-defined areas of disagreement, we can still acknowledge our shared values and beliefs, and enjoy a rich Christian fellowship and the opportunity for mutual learning.”

Davi P. Silva, president of the Seventh Day Adventist Reform Movement General Conference, said, “It has been a valuable opportunity to get to know one another, and to dialogue openly and freely on questions of shared interest as well as to further explore vital differences as they relate to our eternal salvation.”

At the close of the dialogue, attendees decided to come together again in the spring of 2019, although the topics for discussion have not yet been chosen. The group had met together informally twice before, once in August 2017 at the Seventh Day Adventist Reform Movement’s General Conference headquarters in Roanoke, Virginia and then in April 2018 at the General Conference of Seventh-day Adventists offices in Maryland.

Below is a joint statement from participants in the ongoing conversation.

Joint Statement of Participants in the Seventh-day Adventist and

As representatives of the General Conference of Seventh-day Adventists and the Seventh Day Adventist Reform Movement General Conference, we are delighted to have the opportunity to meet and dialogue together in a spirit of Christian friendship and respect. Our shared heritage, and our many intersecting areas of doctrine, values, and practice, have allowed us to quickly establish a strong foundation of understanding and fellowship. As Sabbatarian Adventists, we share unique ties of spiritual kinship, each treasuring the Sabbath truth and looking forward eagerly to the soon return of our Savior.

We acknowledge, though, areas of clear difference in theological understanding and church practice, and these we express forthrightly and humbly, sharing with each other from Scripture and the writings of Ellen White.

We meet in order to better understand one another, to open up a warm and cordial space for discussion and fellowship, and to affirm one another as we each seek to share Jesus Christ and His salvation in a fallen world. We look forward to meeting again in the Spring of 2019 to continue our conversation.