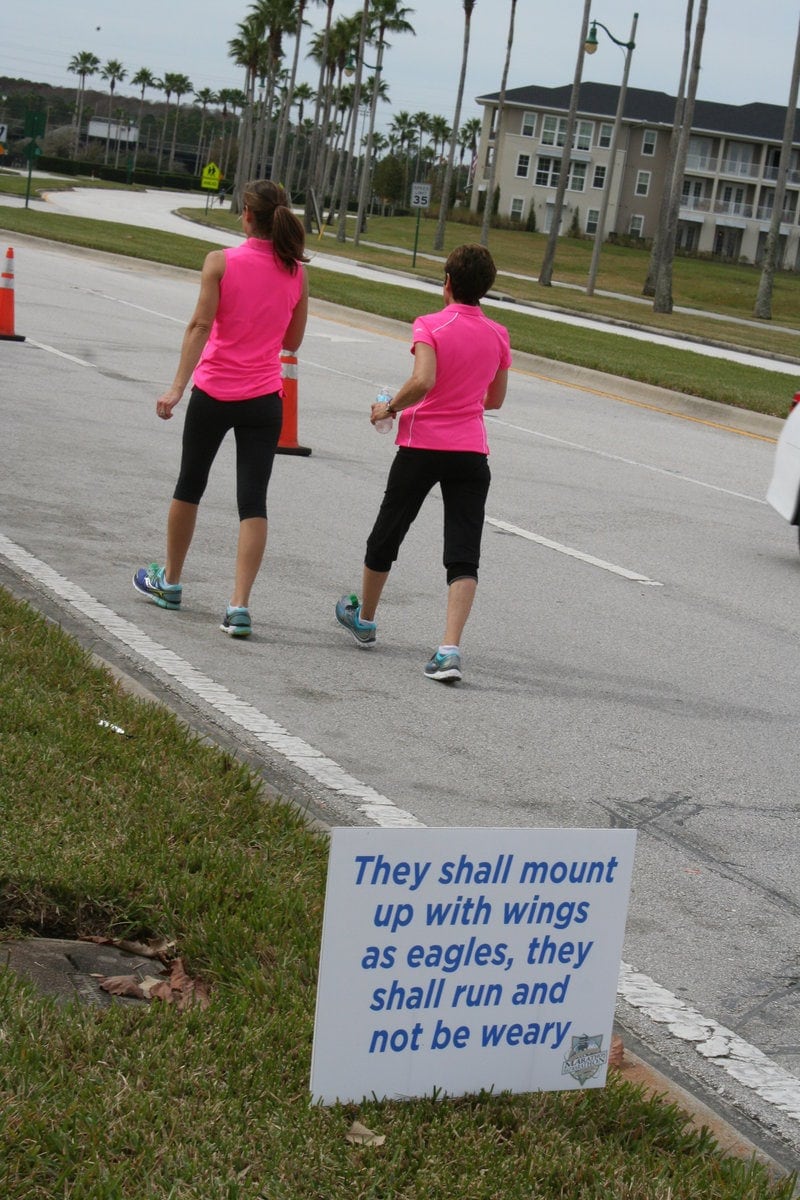 Teenie Finley, the 71-year-old wife of evangelist Mark Finley, completed a marathon despite pain from a knee injury over the weekend, raising thousands of dollars for a church and evangelism center that she and her husband have nearly finished constructing near Washington.

Finley had been on track to finish the Celebration, Florida, marathon in 5 hours and 25 minutes when her knee began giving her significant pain at the five-mile marker. She injured the knee while training for the marathon in December and has had to wear a knee brace since.

Despite the pain, she completed the Jan. 31 marathon in 6 hours, 21 minutes, and 50 seconds, which placed her second in her age category.

“It may sound surprising, but I really felt great after the race was over,” Finley told the Adventist Review.

More than 3,000 runners participated in the annual marathon on Sunday, including the Finleys’ daughter Rebecca, who ran to support her mother. The winner, Jonathan Mederos, 30, of South Miami, Florida, completed the 26-mile (42-kilometer) route in 2 hours, 56 minutes, and 26 seconds.

Finley — who clocked 6 hours, 2 minutes, and 4 seconds in her first marathon last year — ran the marathon for a second year to raise $25,000 toward the $4.5 million Life Hope church and evangelism center in Haymarket, Virginia, where she and her husband live. The church is nearly completed and scheduled to open this spring.

It was not immediately clear how much money she raised with the race. As of Monday, $21,192 had been donated via her fundraising page on the Giving Zone website, while additional funds had been mailed directly to the Life Hope church fund at the Seventh-day Adventist Church’s world headquarters in Silver Spring Maryland.

Finley is in fine form after the race, said Mark Finley, an editor-at-large for the Adventist Review.

“Other than her knee pain, Teenie actually feels great,” he said. “She did not feel winded or sore during the race. Her stamina was outstanding throughout the entire race.”

He thanked Adventist believers worldwide for praying for and otherwise supporting his wife during the marathon.

“We believe that it is a tribute to the Adventist health message and the blessing of God that she began running marathons at 70 years old and she did so well by placing second in her age group this week,” he said.