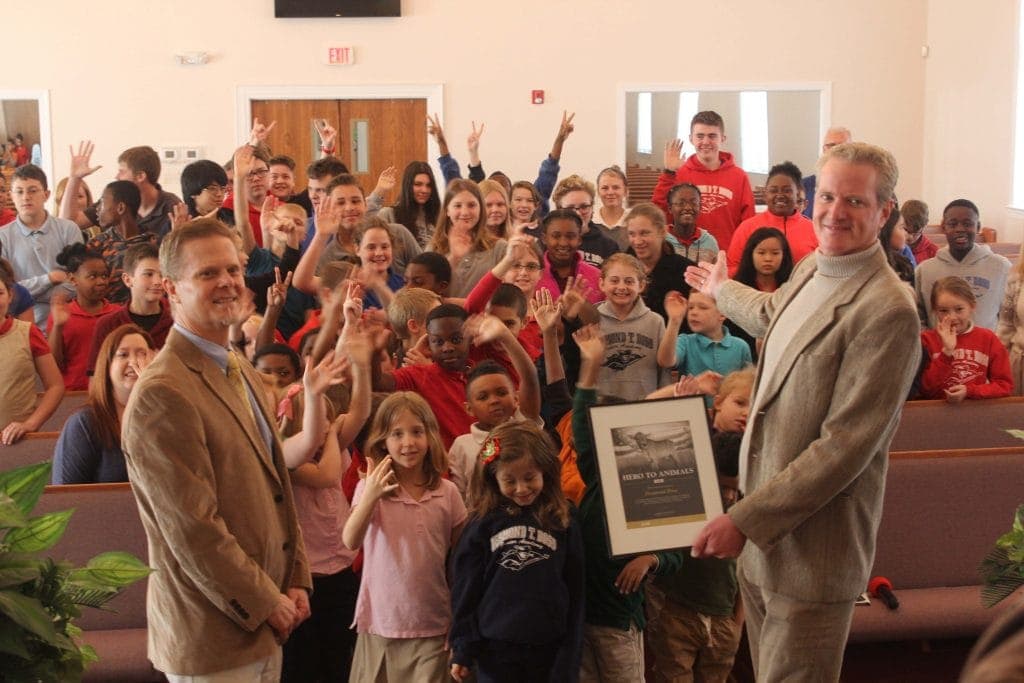 Over a decade after passing to his rest, Desmond T. Doss, the Seventh-day Adventist United States Army medic who became the first conscientious objector to win the Congressional Medal of Honor, hasn’t stopped collecting various honors and awards. This time, People for the Ethical Treatment of Animals (PETA), an animal rights organization with 5 million members around the world, presented the “Hero to Animals” award posthumously because, in addition to refusing to pick up a gun while in the army and throughout his life, Doss was also a lifelong vegetarian and a longstanding advocate for non-violence and compassion.

The “Hero to Animals” award was presented on Feb. 7 at the Desmond T. Doss Christian Academy, a Seventh-day Adventist operated K-12 school in Lynchburg, Virginia, United States, by PETA’s senior vice-president Dan Matthews. February 7 was Doss’ birthday, the day he would have turned 98. In a special school assembly, school principal Steve Doss accepted the award on behalf of his namesake honoree.

“I’m honored to receive this award on behalf of Desmond,” said principal Doss according to the website of the Potomac Conference, or church region, which oversees Desmond T. Doss Academy and other 19 Adventist schools within its territory in the State of Virginia and the Washington Metropolitan Area.

Principal Doss then recalled how in the movie, Desmond is “in the middle of the battle, in the most heinous conditions,” when he decides to hand his meat products to another soldier. When Doss’ fellow soldier asks him why he does not want them, he simply tells him, “I don’t eat meat.”

“I think it shows how Desmond lived his life and was always true to who he was,” said principal Doss. “That’s a lesson to all of us at Desmond T. Doss Christian Academy—to always honor your conviction and don’t let other people or conditions make you compromise,” he said.

While the story of Doss was well known in Adventist circles for years, a 2016 film directed by Mel Gibson and starring Andrew Garfield in the role of Private Doss made his exploits during World War II known to a worldwide audience. In the experience depicted in the highly-acclaimed “Hacksaw Ridge” film, Doss—who had decided never to carry a gun to kill another human being—managed to save 75 fellow soldiers in Okinawa in one day in the middle of a fierce battle. The film was nominated for the Academy Awards in six categories, and went on to win in two.

Tiffany Doss contributed with this story.