Cyprus Commemoration Captures the Spirit of the Reformation 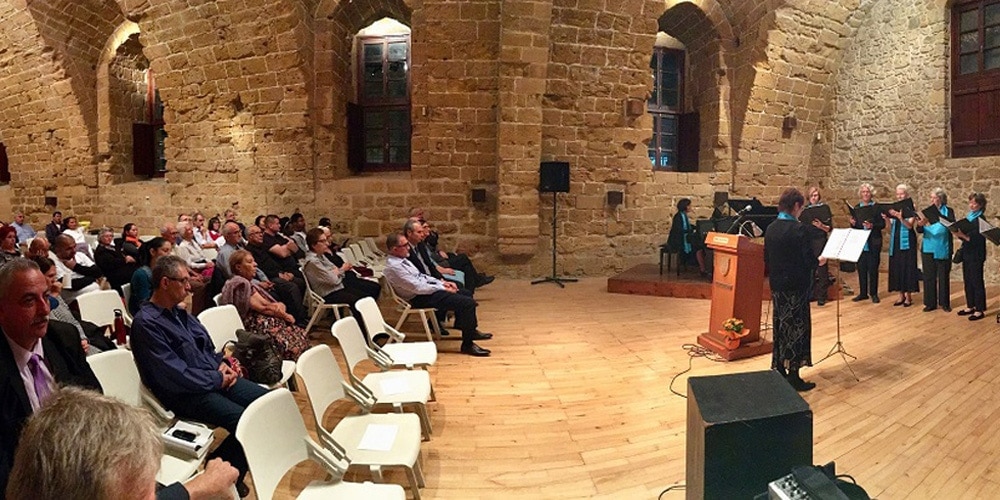 Multiple surprises were in store for the organizers of the recent Reformation 500 celebrations in Cyprus. The Seventh-day Adventist Church community in Cyprus took the initiative to commemorate the event, but was astonished at the way islanders connected with the project, by attending the event, and actively searching for the islands oldest Bible. And a group of German holidaymakers on the island attended as direct descendants of Martin Luther’s co-worker, Philip Melanchthon.

The Cyprus Ministry of Culture and Education provided, free of charge, its oldest facility in Nicosia, the 13th-century Kasteliotissa Medieval Hall. More astonishingly, the only available date in a fully booked calendar of events was Oct. 31, the exact date marking the beginning of the Reformation.

The mixture of exhibits, light refreshments, a choir, and two lectures attracted a sizable audience to the event that was publicized in both Greek and English in leading newspapers and on several radio stations. It allowed the church to connect with a number of religious and government officials, and establish contacts with local people through a search for the oldest privately-owned Bible in Cyprus.

In Search of the Oldest Bible

It was the quest for the oldest Bible in Cyprus that led pastor Branislav Mirilov, one of the main event organizers, to meet with Andrija Jakovljevic, a leading Orthodox Paleontologist. He made a significant contribution to the event by loaning copies of biblical manuscripts in Cyprus for the exhibition and giving a brief presentation. The oldest Bibles, dating back to the 11th century, included a gospel of Luke preserved in a Kykkos monastery.

More surprises were in store, including unexpected guests: The German descendants of Philip Melanchthon, a co-laborer with Martin Luther and the first systematic theologian of the Reformation. The family was visiting Cyprus when they saw a poster advertising the event and joined the celebration.

Starting at 4 pm, visitors found themselves on a voyage of discovery as they walked through an exhibition portraying the major events in the Christian Church from its formation to the present day. Visual illustrations and video clips guided the visitors through key points in the history of Christianity and told the story of the Reformation. Also highlighted was a display of Bibles in different modern languages, supplied by the Bible Society of Cyprus, together with copies of the oldest biblical manuscripts found in Cyprian monasteries.

The large reproduction of Yadegar Asisi’s panorama of the Lutherstadt Wittenberg was also on display, giving visitors the opportunity to experience Wittenberg as it was at the time of Luther. Creative activities were also organized for visiting children.

The evening program commenced with light refreshments and a Cantabile choir sharing musical items from the Reformation era. Andrija Jokovljevic then gave an informative lecture on Cyprus’ treasure of biblical manuscripts found in different monasteries across the island. This was followed by Radisa Antic, a renowned international speaker, writer, and theologian, who delivered a lecture entitled “The Protestant Discovery.” Participants greatly appreciated the Q & A session that followed.

This one evening in Nicosia has opened doors of goodwill and built significant bridges with individuals and communities. An event where 92 church members reached out to a community of 1.2 million mainly Greek-speaking Cypriots and a large international community.

But what about the oldest privately-owned Bible on the island mentioned earlier? Some days after the event a phone call came from a retired school inspector. Mirilov met with Pavlos Ianidis, describing it as one of his highlights connected with the Reformation event. “Holding the Latin and Greek Bible dating back to the 1590’s was a special honor and a tangible way to connect with the Reformation,” he said.