Cows, Cleanliness, and the Seeds of Better Health 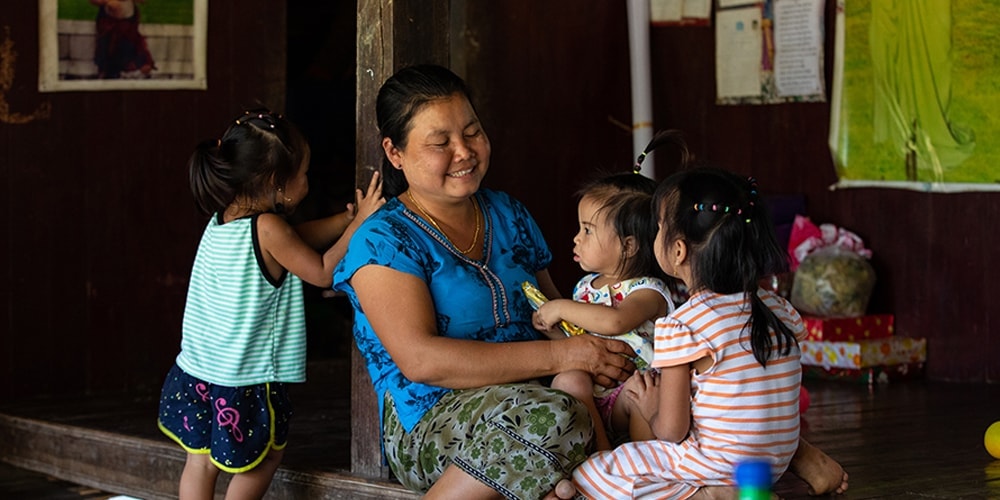 By: Heart for Maternal Health and ADRA Canada

Throughout her 39 years, Chit and her family have farmed near their remote village in Myanmar, raising a few cows and meager crops. They were poor — too poor to even visit the big city of Bangkok in Thailand, where opportunities lie.

Chit was only able to attend up to 4th grade in school. She was married at 19 and had four children before she was thirty. Her husband, a carpenter, got some occasional work but never anything secure. The family depended on themselves, selling some crops for income, “but our farm is small,” Chit said. There was never enough. And they were often malnourished and sick.

Despite leaving school so early, Chit said she was “always interested in learning, especially when I know that the training will benefit my children and the children of the village.” So in 2018, when she heard about the EMBRACE project, she joined immediately.

EMBRACE is a four-year project funded by the government of Canada to improve the lives of approximately 100,000 people in Cambodia, Myanmar, the Philippines, and Rwanda, especially women and children. The program trains community volunteers in better nutrition, healthcare, household agriculture, and more. The program is facilitated by the Adventist Development and Relief Agency (ADRA) Canada, part of a global network of offices working to alleviate poverty.

Chit joined for the training in nutrition and gardening, but she soon discovered that EMBRACE included much more, from maternal and child health and development to vital aspects of cleanliness, and to new ways of thinking about family.

Some of the new discoveries were simple concepts that many people take for granted, like creating a clean environment to keep water clean, or washing hands and food when preparing meals.

The impact on the lives of Chit and her family was immediate and profound. “ADRA provided high-quality seeds, some tools and supplies to help us get our garden going.” The farming lessons taught Chit to maximize what they had. For instance, she learned how to make natural pesticides and how to use their cows’ dung to fertilize crops. They learned how to start seeds in small nursery beds in a protected area, sheltered from the hot sun. Once the seedlings are robust enough, Chit transplants them into a properly spaced garden. “We have also learned how to raise chickens,” she said, a potential health hazard itself if not done right.

One lesson led to another. That’s how it went with the cultural lessons, which boldly question accepted gender roles. “We learned that whatever women can do, men can also do … we should share household tasks and help each other. Even though my husband did not attend the EMBRACE training … he has started helping me a lot around the house … cooking meals and cleaning.”

Groups frankly discussed the many levels of abuse. “I used to only know about sexual abuse,” Chit said. EMBRACE taught them about physical, emotional, verbal, economic, and partner abuse, and even cyber-bullying.

Today, Chit and her family cultivate carrots, pumpkins, squash, cabbage, tomatoes, long beans, eggplants, and watercress. Some were new tastes for her family, but Chit said they love them. Her children also noticed how much better their own organic vegetables taste than those they used to purchase in the market.

The ADRA EMBRACE training has transformed life in Chit’s village. “We have learned so many things that have improved our lives. We hardly ever get sick anymore and are so much healthier,” she said.

The original version of this story was shared by ADRA Canada through Heart for Maternal Health Canada.