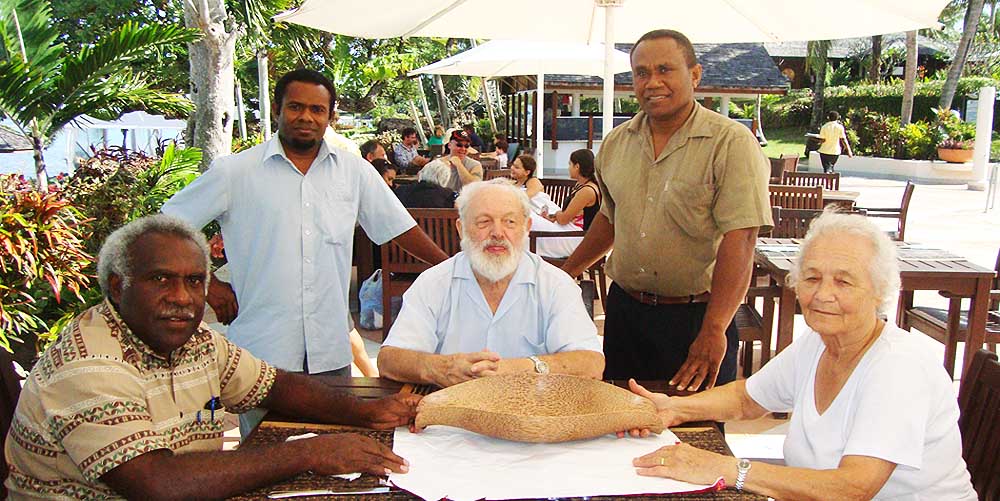 On the Vanuatu
islands deep in the South Pacific, it can cover an entire Seventh-day Adventist
church with a durable iron roof.

Adventist leaders in
Vanuatu recently thanked a retired couple, Henry and Hanni Rusterholz, for
providing iron roofing to dozens of churches on the islands over the past
decade.

During a special
lunch held on behalf of the Rusterholzs, Vanuatu Mission President Nos Terry presented
the couple with a bowl carved out of coconut hard wood as a token of
appreciation.

“This is nothing
compared to what you have contributed to the Mission and church members in
Vanuatu,” Terry said. “Without your support, we would not be able to respond
positively and adequately to the many requests for iron roofs that we receive
each year.

“Thank you for your
generosity.”

The Ruzterholzs, orginally
from Switzerland, have spent more than 1 million vatu ($10,690) since 2001 in
providing iron roofing to more than 100 Adventist churches in Vanuatu and Papua
New Guinea, located about 1,700 miles (2,700
kilometers) northwest of the islands. That is the equivalent to providing about
five church roofs a year, a number that can rise to seven if the churches are particularly
small with 30 to 60 members. A 12-foot (3.6-meter) iron roof costs 3,400 vatu
(about $35).

Now in their 80s,
the Rusterholzs are unsure how much longer they will be able to contribute to
the church roofs.

The couple moved to
Australia in 1978 looking for new opportunities for themselves and their six
children, two boys and four girls. They initially took up farming but later
started an iron roofing business with BHP Australia, a major steel producer now
known as Blue Scope. They were in the business for 28 years.

The couple first
visited the islands in response to a pastor’s request to build a church in
Ipota, Erromango Island, in the south.

"As soon as we
saw how people worship under simple thatched roof made from bush leaves, we
were touched," said Henry Rusterholz. "We thought if we could in a
small way enable people to worship under at least a decent roof, we would be
happy. It has been our ministry ever since."