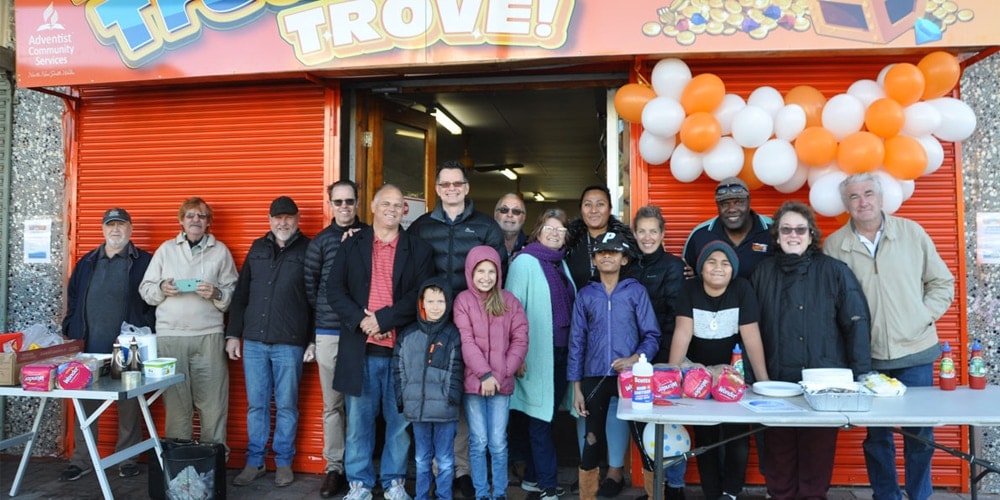 In country towns like Bourke in northwest New South Wales, Australia, unemployment sits at around 25 percent. Lower incomes, droughts, and a lack of resources mean it’s difficult for many people to make ends meet.

Twelve months ago, local pastor Shaun Hepworth from the Bourke and Coonamble Adventist churches teamed up with Bible worker Albert Peter and their wives to make a difference. In Bourke, they opened The Treasure Trove, a second-hand furniture store.

Located in the main street, The Treasure Trove was officially opened by Bourke mayor Barry Hollman on July 27, 2020. After cutting the ribbon, Hollman encouraged the crowd to spend their money at the new store as they queued for a free breakfast.

“We’ve spent the past twelve months renovating the shop and café,” Hepworth explained. “We ripped out the old industrial cookers and transformed it into a second-hand shop. There’s a little café and ministry area out the back where we held five Bible studies — mostly with contacts that Albert has made — in just the opening week.”

Open every weekday from 9:00 a.m. until 3:30 p.m., the shop is filled with a wide range of second-hand items: fridges, freezers, electrical appliances, beds, bedroom furniture, TV units, linen, pictures. And it is becoming a very popular place to shop.

“In the first week, we sold more than six thousand dollars [Australian, about US$4,350] of stock and have orders for just as much. We thought we’d have enough stock for a few weeks!” Hepworth shared.

“We want to be a useful presence in town. We want to provide a service that isn’t being done by anyone else, and not just second-hand clothes. It’s hard to get furniture in town, so it fits the bill in that regard,” he explained.

The dedicated team of four is amazed at the way God has provided and directed their ministry to the community.

“The Adventist church is on the outskirts of town and hasn’t been working. We decided we needed a ‘front door’ for the community, so we assessed the need, and I made an application to the [North New South Wales] Conference. They accepted it and bought two shops in the main street,” Hepworth said.

“We did the renovations, and about a month from opening, we still didn’t have any stock. I knew someone from Coonamble who owned a gift shop and had recently retired. He donated $20,000 [about US$14,500] worth of new stuff from the gift shop and some second-hand furniture. All I had to do was hire a truck and take it back to Bourke. The Lord has just provided, and now two more people from Coonamble have heard about us and want to volunteer all next year,” he added.

For Hepworth and his wife, who decided to do ministry in a remote part of New South Wales more than seven years ago, they saw God working before The Treasure Trove project was even on the horizon.

“We were looking for ministry work to do, and thinking about going overseas,” Hepworth said. “I’d gone through Coonamble in 2012 and done some colporteur work, so decided to move there and start a kids’ club. It grew into a regular Sabbath School and church service every week. On a good week, we’d get 20 people.

“At the time I wasn’t employed by the conference, but I knew [the then conference general secretary] and told him I was going to go to Coonamble for 12 months. He said, ‘You’re kidding!’ They’d had a meeting two days earlier, and on the agenda was what they were going to do with Coonamble church. He said it was an answer to prayer and gave me a job. And now we've been here seven years.”

In Coonamble, Hepworth and his team have also been running a food bank and thrift shop for nearly three years, both of which are going well.

“The motivation at the end of the day is to share Christ, and the hope that we have. There are not many people out here and little Adventist presence. God wants to have an Adventist presence in these places. He does the hard work, and we've just stepped out,” he said.

Feature
Lessons Learned on a Trip to Alaska Magazine Article
Everything’s Fine
Giving without the expectation to receive.