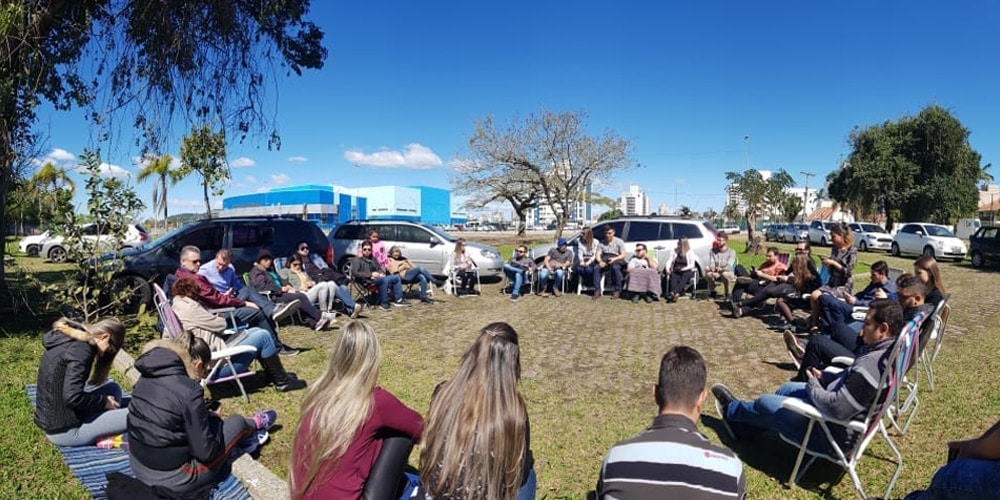 Around the world, many new Seventh-day Adventist congregations don’t have any choice but to meet in the open air while, over time, they collect funds to construct a church building. In southern Brazil, however, a recently formed Seventh-day Adventist group opted to hold its weekly worship services in a city park.

The Vila Moema Seventh-day Adventist congregation in Tubarão, Santa Catarina, Brazil, hopes this decision will help them to engage better with the community.

A Church in the Open

It is 9:30 a.m. The first few people arrive with their folding chairs at the only city park in the Vila Moema neighborhood of Tubarão, a city of 100,000 people. Some bring extra chairs in case a passerby feels drawn to the group and decides to stay.

The meeting starts at 10:00 a.m. An observer might think that it is a large picnic, a reading club, or something similar. However, it is a worship service of the local Seventh-day Adventist congregation.

Members have been meeting at the same spot for three months in 2018. And they have never had to cancel because of the weather. “It has never rained during the service,” participant Deyse Galarz said. “Sometimes rain is in the forecast, but the weather changes just in time. Other times it drizzles in the early morning but then stops before our worship time.”

As the new group looks for a meeting place to rent long term, they continue worshipping in a place they find relevant. “Members told me they wanted to be relevant and known in their neighborhood even before having a permanent place of worship,” local pastor Maurício Sales explains. “They themselves wanted to be the church.”

In early 2018, about 20 members of the Central Seventh-day Adventist Church in Tubarão decided to plant a new congregation in a city neighborhood by starting with a Center of Influence.

“The group embraced the idea, and we provided the training,” Sales says. “They followed a series of 16 studies on God’s kingdom and how to become a relevant, outward-looking church.”

As soon as the group was formed, members decided to look for a place to rent, Sales said. They were so eager to preach, however, that they decided to start meeting right away in the city park, which is located across from the local community center.

The church group resulted from the work of a small group at the mother church that multiplied and now has 38 members. Half of them are people who either are getting to know Adventist teachings or had left the church and have decided to come back. Of that group, about 20 are regularly attending the worship services at the city park.

“We meet here to start being a blessing for this neighborhood,” Galarz said. “In the morning we have our worship service, and in the afternoon, we get involved in outreach and community service.”

Galarz shares that the initiative is proving to be successful. “We had days when homeless people came and stayed with us for worship,” she says. “Another time, a local businessman saw us as we were reading the Bible and decided to participate.”

The long-term goal, Galarz said, is to rent a permanent place to offer healthy cooking classes, health fairs, and social-focused initiatives. In any case, she acknowledges, the decision to meet in the open has strengthened the fledgling congregation.

“It is impressive [to see] how the group fellowship and sense of mission increased dramatically as the weeks went by,” Sales says. “It is clear proof that when we get involved in church, our communion with God also increases.”