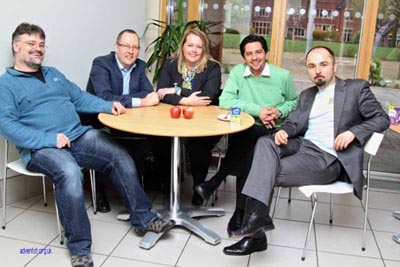 Bringing together IT and media missionaries and enthusiasts from
every part of the British Isles, Demark, Holland, Norway, and beyond, the South
England Conference (SEC) Communication Department hosted its first regional GAiN
conference (Global Adventist Internet Network) in Europe. The conference took
place at Newbold College, February 27 through March 2, 2014.

Introducing GAiN to delegates from across Europe, Kirsten
Øster-Lundqvist, SEC Communication director, described society’s incredibly fast
move into an online culture: “We have evolved into ‘digital nomads.’ Everyone
is mobile, and everyone has nearly unlimited knowledge at their fingertips. If
we don’t have an online presence, we basically do not exist.”

The GAiN Conference focused largely on understanding the
principles behind the exponential growth of technology, and learning how that
technology can be used to enrich the mission of the church.

So how does the church share the gospel in fresh ways that are
meaningful to growing numbers of digital nomads? Rajmund Dabrowski, former
Communication director for the Trans-European Division and the General
Conference, asked delegates to consider those to whom they are actually
communicating. While the church is supposed to be a missionary community, it
often spends most of its time talking to itself about how good it is. “Good news
has to be proclaimed from the rooftops,” he said, “not from our badly lit
churches.”

Dabrowski proposed four principles for success in communication:
imagination, boldness, risk, and creativity. He echoed Ellen White’s
observation: “The Bible does not condemn genius or art; for these come of the
wisdom which God gives. We cannot make the heart purer or holier by clothing
the body in sackcloth, or depriving the home of all that ministers to comfort,
taste, or convenience” (Advent Review and
Sabbath Herald, May 16, 1882).

Other highlights of the conference included:

Karsten Øster-Lundqvist,
lecturer at Reading University, challenging the “industrial approach” to
education, arguing that e-learning can and should be embraced in church teachings.

Tom de Bruin, Dutch
Union executive secretary, arguing that ours is not a postmodern society, but
rather a society dealing with the consequences of postmodernism. He gave a
useful glimpse in to the complexity of today’s society where no one label embraces
all people groups. “My father [who is 72] is postmodern,” said de Bruin, “I’m
not.”

Delwin Finch tackled
the topic of live streaming in churches. “Streaming allows for a safe way for
people to attend ‘try before you buy,’” he argued. Finch listed several reasons
to stream, but also why some churches shouldn’t stream stating, “Not all church
services are ready or suitable for streaming, and streaming brings with it a
lot of responsibility.”

Welsh Mission president John Surridge presented the
FreeBible project, and with data statistics compared the cost of various
methods of leaflet dropping and digital advertising. There was little doubt
that a digital approach provided better value for the money.

Costin Jordache introduced
attendees to the world of Big Data, which crunches massive amounts of
information into useful overviews. This is an invaluable resource for churches
targeting specific groups with evangelization or outreach. His most important proposition:
“I have a compelling story of someone who just happens to be an Adventist!” He
emphasized, “If you have a great product, you can compete in the marketplace.”

Attendees were impressed by the overall quality of the
presentations and the professionalism of the presenters. Some expressed their
surprise that the presenters were also pastors. Blogging about his experience, Daniel Blyden from
Birmingham wrote: “This is the first time I have been among such a community
within my church. So I was excited and proud to talk ideas and strategies with
like-minded people. It turns out that we have some brilliant minds in our
global community. . . . Knowledge and information not only for use in my church
life, but also in my professional life too. I left the conference thinking, Who knew there were so many pastors with
up-to-date marketing and communication expertise in my church?”

Media student Espen Johnson was excited to see and hear people
talking about media from a church perspective. “This is something I don’t get a
lot of,” he said. “All the presentations were excellent, but Dr. Tom de Bruin’s
presentation, “Understanding Today’s Society,” was something I didn’t know a lot
about. However, I found myself relating to basically everything.”

The youngest attendee was 12-year-old Kwadjo, who runs his
church’s ProPresenter software.

Tweeting during the presentations was encouraged, adding another
layer of technology, and screens at the front showed the tweets as they went
up. This also enabled people watching the live streaming of the presentations
to join the conversation.

“It was an excellent program,” said SEC president Sam Davis. “Having
talked to several of the attendees, they are impressed with the quality and
feel they have received training relevant to both their church and professional
life.”

While GAiN focused on many of the technical challenges of
spreading the gospel in a digital age, Dabrowski perhaps best summarized the best
starting point: “Communication starts when we begin first by listening to
Jesus.”

SECmedia both streamed and recorded the presentations, most of
which can be found online.