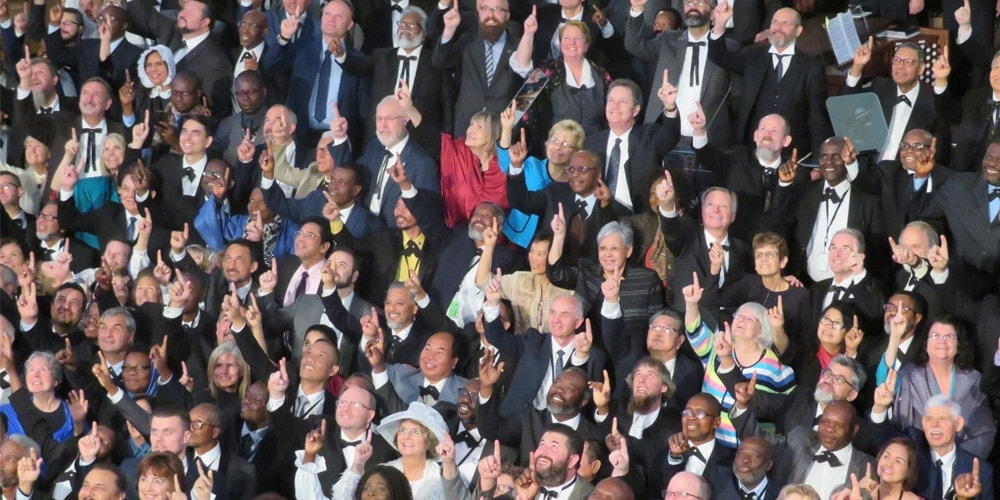 Throughout history, God has always had a special people. In our era, in what biblical prophecy describes as the last days, God will also have a people, faithful to Bible truth, with an urgent, distinct mission.

This affirmation was the heart of Seventh-day Adventist Church president Ted N. C. Wilson’s annual pastoral address to hundreds of members of the church’s Executive Committee from around the world on October 10, 2020. Due to COVID-19-related restrictions, the world church’s annual business meeting this year is taking place virtually. Wilson’s Sabbath address, entitled “God Will Have a People,” was livestreamed at 7:00 a.m. EDT to accommodate the many time zones of the delegates, who followed the service from their homes.

Who Are Part of God’s People?

During his message, Wilson set out to describe the main characteristics of those who will be part of that people, including a full trust in God and active service to proclaim the nearness of Jesus’ second coming. God’s presence in their lives, Wilson said, will make His people “humble,” “loyal,” and submissive “to the love of Christ.” “This people will lift up the Word of God and believe every word that proceeds out of the mouth of God,” Wilson said. They will “[call] people out of confusion and back to the true worship of God.”

That connection with God will help His people to avoid what Wilson defined as “cultural deviations from biblical truth.” “This people will be completely aligned with God’s biblical plans,” Wilson said, including the Lord’s plans for His church.

Because they are attuned to the divine plan, Wilson said, God’s people will be active. They  “will preach, live, and witness to others of His eternal love … His salvation … and Christ’s soon coming.” And, he added, “God will have a people who love Him so much that they connect with Him on a daily basis, and their lives speak louder to those around them than any sermon could ever do.”

The notion of a special people — what the Bible calls a remnant — is biblical and historical, Wilson emphasized. “All through the ages, God has had His people,” he said. “The Bible includes many examples of people who overcame by faith despite their challenges.”

The same will happen at the end of time, he said.

Wilson reminded his viewers that during the past eight months, our society have been thrown into confusion and disarray. “It has been a tough time for so many people,” he acknowledged in reference to the COVID-19 pandemic, which has brought what he described as “physical destruction and great confusion.” Even though the pandemic is not the end of the world, he said, it signals that we are getting very close. In this moment, Wilson emphasized, “God has a people who will point others to the only One who can provide stability, understanding, hope, and a complete change of heart.”

Amid the unusual circumstances, God has been working with His people, Wilson said, to use innovative and creative ways of touching others’ lives. “The global outreach of God’s people during the pandemic has been phenomenal,” he noted as he shared different ways by which Adventists all around the world are using social media to show the love of God and Bible truth to other people.

Wilson then called on church leaders and members to prepare for the future by completely placing themselves in God’s hands. “God will have a people, and, by His grace, we can be part of it,” Wilson said.

God’s people will proclaim the three angels’ messages, Wilson said, in reference to what is recorded in the Bible in Revelation 14:6-12. According to Bible prophecy, he explained, the message of the first angel (verse 6) is “a call to worship the Creator and not the created.” The second angel’s message, he reminded viewers, is a call to leave “Babylon,” a symbol of the confusion resulting in mixing truth with error (verse 8). Finally, through the message of the third angel (verses 9-12), “God warns us not to bow to anything less than Him and the truth,” including the seventh-day Sabbath, Wilson explained. “Nothing but God’s everlasting biblical instruction is to be honored. The seventh-day Sabbath is God’s seal and sign of those who love and obey Him.”

Wilson also cautioned all Seventh-day Adventists about thinking that the prophecies of Revelation are conditional. “We believe in the historicist understanding of biblical prophecy, and we accept the historical-biblical approach to reading Scripture,” Wilson emphasized. “Do not fall for anything but the time-honored, God-blessed approaches to the Bible and prophecy,” he said.

In the last part of his message, Wilson quoted Adventist Church co-founder Ellen G. White. In her book Christian Service she wrote, “There are stormy times before us, but let us not utter one word of unbelief or discouragement. Let us remember that we bear a message of healing to a world filled with sin-sick souls” (p. 136).

Against this background, Wilson said, the Lord is calling every Adventist church leader and member to be part of His people, to be “God’s people who will stand for Him as we lean completely on Him.” Every Adventist, he emphasized, is invited to be part of God’s people by getting involved in the final proclamation of God’s message.

“God is calling [everyone] to be part of His last-day people and go out to proclaim His message,” Wilson said. “Are you willing to go?”

You can watch the sermon delivered here.