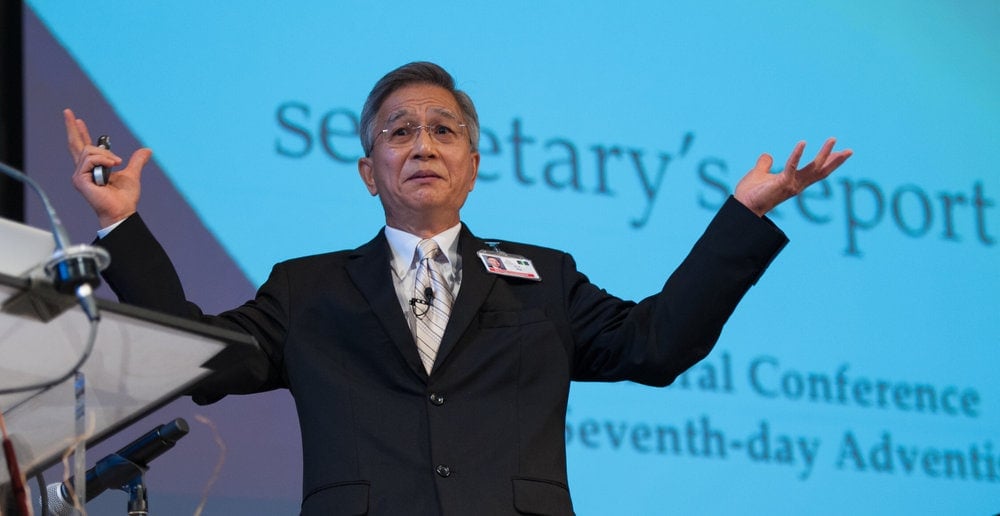 Membership in the Seventh-day Adventist Church has topped 18
million for the first time, but G.T. Ng, executive secretary of the Adventist
world church, isn’t celebrating.

“It’s easy to baptize them, but it’s much harder to retain
them,” Ng said in an interview.

“Retention and nurture should be on the same side of the
coin, but apparently baptism brings more glamour: ‘Look at how many I have
baptized!’” he said. “’Nurture? Who cares? There’s no glory for me.’ So we have
an inherent problem: losses, serious losses. But not many people talk about
it.”

Ng, however, made a point about talking about it on Sunday when
he delivered a yearly membership report to the Annual Council, a major business
meeting of world church leaders at the Adventist Church’s headquarters in
Silver Spring, Maryland.

Some of the losses reflect an ongoing drive by local
churches to audit their books to remove the names of unreachable members who
have not attended worship services for some time, said David Trim, the world church’s chief archivist who compiles the data.

Without the audit, church membership would stand at 25
million today, Ng said.

Offering another difficult statistic, Ng said 31.8 million
people have been baptized over the past 40 years, while 11.4 million have
dropped their membership or gone missing. The figure does not include those who
died.

Many of those people left because the church didn’t nurture
them properly, Ng said in the interview.

In a recent example, the last Adventists who were baptized after
an evangelistic series in a small village in northern India in 2005 reconverted
to Hinduism in late August. The incident, which made headlines in the Indian
media, raised fears among Christians that the reconversions were forced, which
is illegal in the country.

But an Adventist task force sent to the village, Asroi,
found that the 33 former Adventists had received little support from church
leadership since their baptisms in 2005 and at the same time had been eagerly
courted by Hindu activists. Only about six people remained on the membership
books when the reconversions took place.

Leaders with the church’s Southern Asia Division, which
includes India, have engaged in soul-searching after the loss.

“We have to carefully nurture the newcomers and help them to
be rooted in the word,” T.P. Kurian, communication director for the Southern
Asia Division, said in a recent e-mail.

Also Sunday, Ng defended the practice of counting members and
said it could not be compared to an Old Testament census by Israeli King David that
resulted in punishment from God. Ng said David’s actions were a display of arrogance
and pride.

“When we count in the church, we have to count with
humility,” he said.

The tally, he said, is simply “a report on what the Master
has done."

Ng elaborated in the interview by pointing to three of
Jesus’ parables in Luke 15.

“There’s nothing wrong with counting itself,” he said.
“After all, Jesus counted in the three parables, right? The woman counted her
10 coins and found one was lost. The shepherd counted only 99 sheep. The father
lost a son. So there’s nothing wrong.”

Among the other statistics, Ng noted that growth was
stagnating in the countries of the northern hemisphere and Australia but
exploding in the southern hemisphere, especially in Central and South America,
Africa, and Southern Asia. Furthermore, he said, the modest growth taking place
in North America and Europe was largely coming from immigrants from the
southern hemisphere.

Europe is even more challenging, he said. The church has
three divisions in Europe, a legacy of its long presence on continent, but
membership is small. The Trans-European Division, which includes Britain, is
the smallest of all of the church’s 13 divisions with 84,428 people.

The British Union Conference, for example, has 34,512
members, a net increase of 464 people from 34,048 a year earlier. Most of the
new members were immigrants.

“What about the indigenous British?” Ng said. “I mean, they
were born there. They were from there. What about them? Are we doing something
for them? Those are hard questions.”

Ng said mission stories usually end on a high note and leave
the impression that the work was successful. But he said the statistics present
another side of the picture: much of the world hasn’t had a chance to hear
about the first coming of Jesus, let alone the second coming.

He said the church has a presence in about 230 countries,
but another 22 countries recognized by the United Nations remain unentered.
Furthermore, a country might have a large population of Adventists but
still contain major people groups without a
single Adventist. In Kenya, many of the 800,000 church members primarily come from two
language groups, while the other 40 language groups are largely
unreached. The same is true of Thailand, where most members come from minority people groups.

“So it does not mean that once you have entered a country
the work is done,” Ng said. “Far from it!”