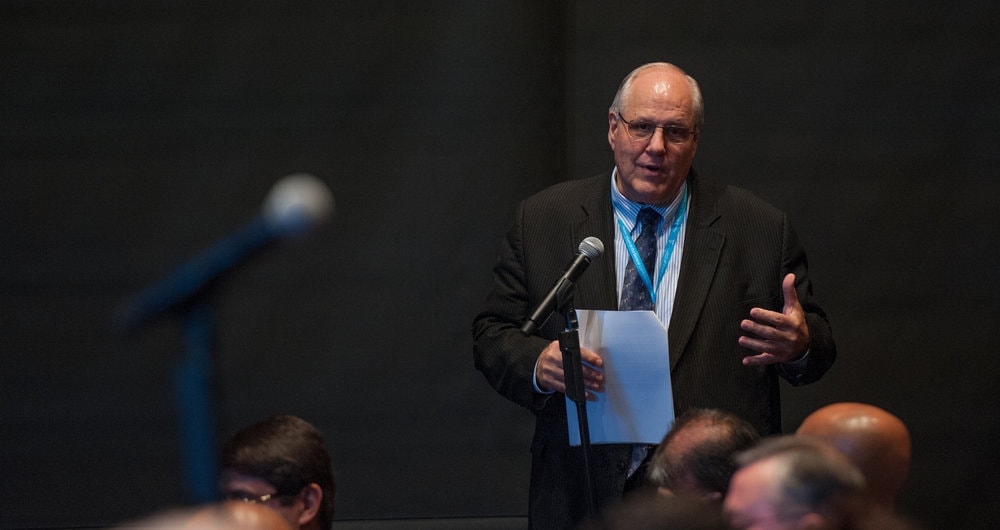 The General Conference, the top administrative body of the Adventist Church, had 282 employees in 1995.

Today it has 287, an increase of only five employees.

“The message that I have for church leaders is if they are going to be successful in having money to do work in the field, they must control the number of people they have at their conference, union and division offices,” Lemon said in an interview on the sidelines of the Annual Council, a major business meeting of church leaders in Silver Spring, Maryland.

“Adding pastors and front-line employees is what we encourage, and not just adding to administrative levels,” he said.

Lemon made the appeal to church leaders as he presented his annual treasurer’s report at the Annual Council on Monday. He also provided a snapshot of the financial state of the world church, showing that it received $2.39 billion in tithe last year, a 3.54 percent increase from $2.31 billion in 2012. Of that amount, the General Conference received nearly $150 million last year, roughly the same amount that it has gotten since 2011.

Lemon reminded the Annual Council how tight finances were for the General Conference during the early 1990s and how they had had to adjust appropriations and reduce the number of employees.

He said the General Conference has hired people as needed since then, including the director of a new Children’s Ministries department, but every addition comes at a cost to another part of the budget. If a department wants to add a staff member or a service, it has to find something to cut. To optimize costs, nearly all General Conference leaders now share administrative assistants rather than have their own.

“You go to some places and every year they are adding two or three people, but if you add two or three people here, you will have eaten up everything that we’ve got,” Lemon said. “We’ve added positions over the years, but we’ve added very, very few.” In a nod to the U.S. political system, he added: “When we have, it takes both houses of congress, the president not to veto it, and everyone to support it.”

Lemon said the main goal of the General Conference is to only maintain enough working capital to have a healthy financial operation and cover day-to-day expenses, and to allocate all excess funds at the end of the year to special projects.

Those practices have allowed the General Conference to absorb the shock waves of the 2008-09 global financial crisis and are helping it withstand the constant fluctuations of foreign currencies today, he said.

It also has meant that the General Conference has been able to provide substantial sums of money for special projects, including ongoing initiatives to share Jesus in the 10/40 Window, a territory covering North Africa, the Middle East, and Asia. Lemon said spending in the 10/40 Window is now comparable to the size of a division’s budget.

He called on church leaders from around the world to become more effective by practicing financial discipline. “If you want your organizations to have the ability to respond immediately like we do with special projects, you can’t just add employees,” he said.

Over the years, the amount of tithe contributed by other divisions to the General Conference has grown to 2 percent from the previous 1 percent.

“This should never be treated as an initiative to get them out of the building. Quite the opposite,” Ted N.C. Wilson, president of the Adventist world church, told Annual Council delegates after the vote.