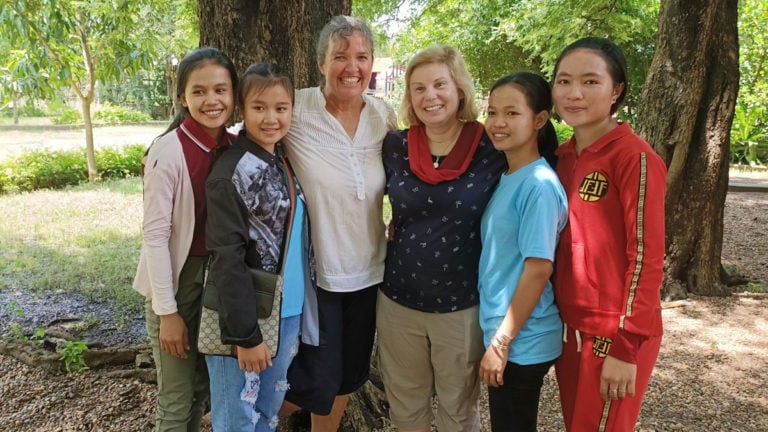 Elizabeth Waters, a member of the Central Coast Community Church in Wyong Creek, New South Wales, Australia, is a graphic and web designer whose ministry project is improving the lives of young girls in Cambodia in a creative and practical way.

“The girls make the decorations, and we bring them back to Australia to sell for $5 [about US$3.45] each,” she says.

After paying the girls for their work, the profits go directly toward running the Restore One School in Cambodia and paying teachers’ wages.

“We sell [the decorations] mostly through Facebook and via friends. We love having people take a bag-full to sell for us because the more widely we can promote them, the more we can sell . . . [and] the more teachers we can pay to teach the kids.”

Waters runs the project for a month every September, during the Cambodian school holidays, and has been doing so for the past four years.

“Girls from rural villages are often sent to [the capital city of] Phnom Penh to work, but the risks for young unchaperoned girls are huge,” she says. “Allowing the girls to work from the safety of their village means they can help their families financially and then go back to their education in the new school year."

In 2016, Waters began her program by making heart-shaped decorations with the girls. Then in 2017, they made stars, and in 2018, Christmas baubles out of felt, buttons, and ribbon.

“And this year we have made the most delightful little houses!” she exclaims, joined by her friend and fellow church member, Kathy Altona, and Restore One volunteer coordinator Tanya Lawrence.

On average, about 20 girls come together to make the decorations but sometimes fewer of them because of the Buddhist festival that is also in September.

“Some of the girls have to go to the [festival] in the mornings but then come back in the afternoons . . . One of the most rewarding parts is looking around the room, listening to the happy laughter and chatter of the girls while they work, and knowing they are safe.”

Waters plans to return to Cambodia next year.

“Why do I keep going back? Because I want to see the girls succeed. I want to see them educated and able to make choices about their futures,” she says. “I hate how children are taken advantage of in poor countries.”